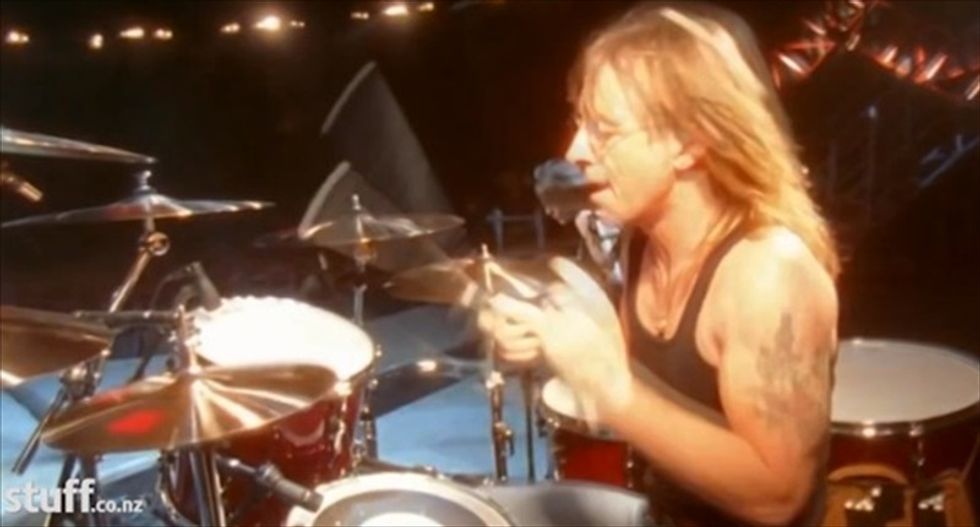 AC/DC drummer Phil Rudd was Thursday accused of attempting to hire a hitman as part of a murder plot after police raided his New Zealand home.

Police swooped on a house at Tauranga in the North Island early Thursday and charged a 60-year-old man with a raft of offences, including attempting to "procure" a murder, threats to kill and possessing methamphetamine and cannabis.

Officials at Tauranga District Court confirmed Rudd appeared before the court on Thursday afternoon and was bailed to reappear on November 27.

Fairfax New Zealand reported that he was accused of trying to organise a hitman to kill two men. It said a judge ordered that the identities of the pair and the man who was allegedly hired to kill them should not to be disclosed.

Under New Zealand law, attempting "to procure any person to murder any other person" is punishable by up to 10 years in jail.

Australian-born Rudd joined the legendary hard rockers in 1975 and left in 1983, only to link up with them again in 1994.

The high-voltage band, one of the highest grossing music acts of all time, has had numerous hits that are still staples on classic rock radio worldwide, including "Back in Black," "Highway to Hell" and "Dirty Deeds Done Dirt Cheap."

In September the group revealed that founding member Malcolm Young had dementia and was being treated in a Sydney care facility.

News of Young's illness and retirement sparked rumours that the band could fold but Rudd was quoted earlier this year as saying it would continue.

"It'll never happen. Angus (Young) will never retire and as long as Angus never retires I won't retire either," he said then.

The band has since announced a new album, Rock or Bust, will shortly be released and they are due to undertake a world tour in 2015.