Hi-tech punch on nose for sharks could keep swimmers safe 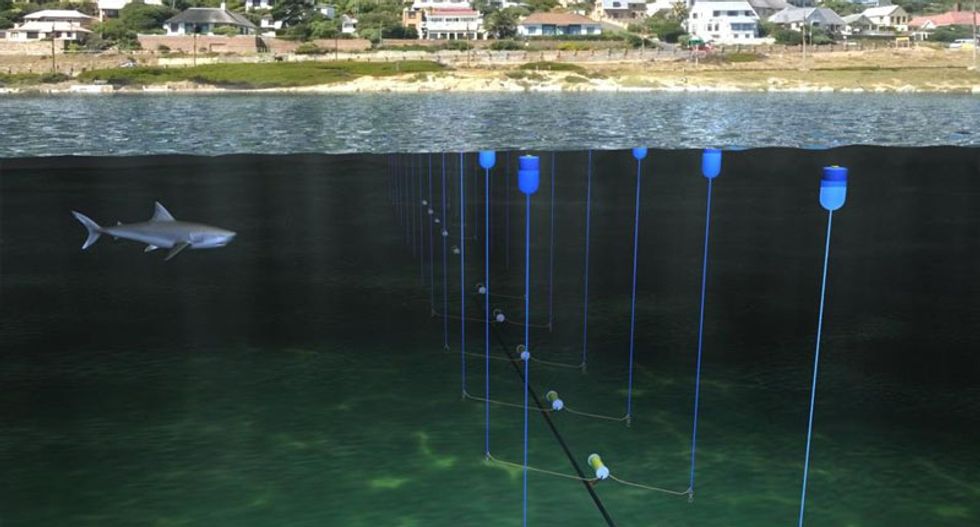 A high-tech version of the reputedly life-saving punch to a shark's nose is being tested in an effort to protect humans without harming the toothy predators or other sea creatures.

In the blue waters of a small bay in Cape Town, a revolutionary experiment with an electronic barrier seeks to exploit the super-sensitivity of a sharks' snout to keep swimmers and surfers safe.

The technology has been developed by South African experts who invented the electronic "shark pod" for use by surfers and divers -- now marketed by an Australian company -- and could be applied globally if successful.

The pod and years of research have shown that sharks will turn away when they encounter an electrical current -- and that has prompted this experiment on a much larger scale.

A 100-metre (328 feet) cable with vertical "risers" designed to emit a low-frequency electronic field is in the process of being fixed to the seabed off Glencairn beach, and will remain there for five months.

"If successful, it will provide the basis to develop a barrier system that can protect bathers without killing or harming sharks or any other marine animals," says the KwaZulu-Natal Sharks Board, which developed the shark pod.

As for humans, "if someone touched the small part of an electrode that is exposed, they might experience a tingling sensation" but would suffer no harmful effects.

The barrier would mark a major shift away from the shark nets used in KwaZulu-Natal on South Africa's east coast for the past 50 years, which also kill other animals and have been criticised as environmentally destructive.

Research has shown that sharks have a gel in their noses which makes them more sensitive to electrical currents than other species, and thus ordinary fish and sea life such as seals and dolphins should not be affected by the barrier.

"We are doing our damndest to do something environmentally friendly," sharks board project specialist Paul von Blerk told AFP.

But the challenges are huge.

"It is easier to design things to put in space," said Claude Ramasami, project manager at the Institute for Maritime Technology, which is helping the sharks board put its plans into practice.

This is because of the relentless power of the sea, shifts in the seabed, undersea structures and marine life -- and simply using electricity in water.

One reason that Glencairn in the Cape was chosen as the site for the experiment is that it is relatively protected compared to the often pounding surf on the tourist beaches of KwaZulu-Natal, where Durban is the provincial capital.

The clear waters will also enable fixed cameras and shark spotters on nearby cliffs to monitor the movements of the predators within the bay and see whether the barrier turns them away from their usual cruising routes.

There should be no shortage of action -- in a 25-day observation period, 53 sharks were seen off the beach.

Environmentalists have welcomed the experiment.

Alison Kock, a biological scientist and research manager for Shark Spotters in Cape Town told AFP it was "a really good idea".

"It's an exciting opportunity to look at new technology with the ultimate aim of replacing lethal control methods like shark nets and (baited) drum lines.

"The technology is really specific in that it targets a sense that only sharks and rays have. Mammals like dolphins and whales don't have a sense like this, so they are not going to be affected," she said.

The gel in the noses of sharks allows them to detect minute electrical fields such as a heartbeat to find prey in murky water, but as they approach within a couple of metres of the barrier the power should be enough to turn them away.

The senior manager for WWF's marine programme in South Africa, John Duncan, said the organisation was "absolutely supportive of interventions which attempt to manage human-animal interaction in a non-fatal and non-impactful way.

"And at the moment it is a growing challenge with the white shark attacks in South Africa."

Sharks have killed 13 people in South Africa over the past 10 years, Kock said.