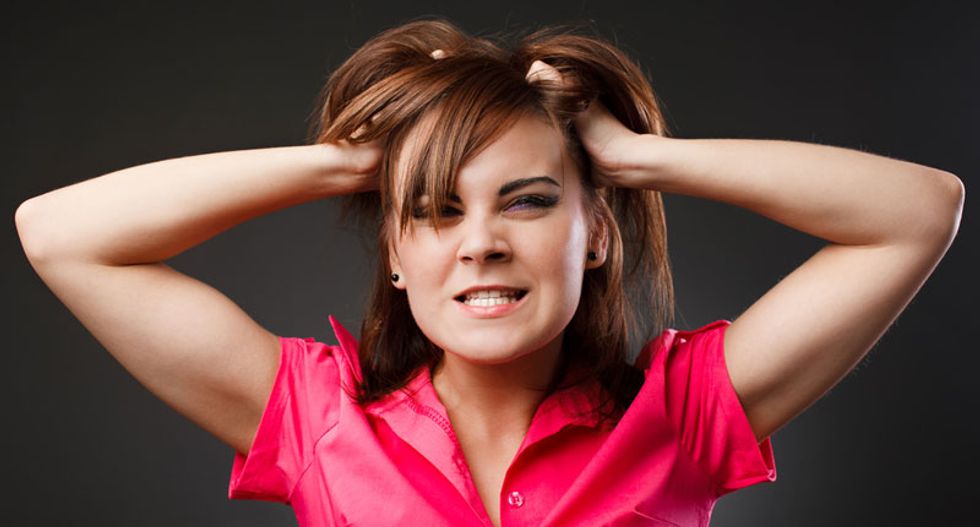 Thanksgiving, a time to argue over whose sweet potato recipe is the best and … politics! Here, our Facebook audience offers some words of wisdom for dealing with those inevitable political debates that can make us envy the fate of that turkey. Read some of our favorites from the 1,300 plus we received so far.

“Treat each others’ ideas with respect. My late father-in-law and I disagreed on a number of issues but we argued the point and asked questions. I left each of many dinner time conversations with him with a new admiration and love for him. As my mother used to say, you can disagree without being disagreeable.” — Kaye Thompson Peters

“It suddenly becomes clear, sometimes right in the middle of dinner, that my dog desperately needs to go out for a walk.” — Karen Cody Howser

“I cut them off…period. I cannot accept anyone in my life who espouses hate and bigotry. Ain’t nobody got time for that!” — Harper Greer

“We love heated discussions around the table and encourage them; they sharpen the wits and educate the kids and keep everyone’s hearts beating with passion.” – Michael Wilds

“[If] potentially divisive topics come up, I will engage. I don’t believe that one ‘shouldn’t’ discuss anything. It’s important to hear out the people you love and to have a chance to speak your own mind. If the conversation starts to get heated, the key is to know when to disengage, when to encourage returning to the meal or to topics closer to home.” — Jeff Lange

“I was a kid during Vietnam and I remember how they used to declare a holiday truce. We observe that in my extended family- no politics on holidays.” — Lisa Vipperman

“I believe a host should be able and quick-witted enough to steer conversation to avoid heated controversy. One must always be at the ready when politics, sex and religion are proffered as topics.” — Mike Watson

“Focus on feeling and not intellect and listening as opposed to talking. There’s a reason why people will cling to political ideas — liberal or conservative — and understanding what those feelings are can bring to light a lot of understanding.” — Val Vadeboncoeur

“I ruined the last Thanksgiving dinner with my wife’s family before her father died arguing about politics … In hindsight I truly wish I would have kept my mouth shut. I wasn’t going to change anyone’s mind.” — Ted Ashley

“Turn off my hearing aids (that I have to pay for out of pocket) and keep my mouth shut. Nobody can agree on anything, so there is no point in saying anything.” — Andrew Rumble

“We must discuss. There is no way to avoid it. We have nearly come to blows. But we know we love each other … We have become the Congress.” — Hershel Lacey

“Watch Jonathan Haidt’s [interview] and then respect the fact that others have the right to have values and beliefs that are different from yours. If Jonathan Haidt’s research is right, conservatives actually share liberal values, but have additional ones that liberals don’t share. Thanksgiving is about giving thanks for what we have – gratitude – not converting conservatives to your ideology.” — Scott Wolfel

“Arguing and discussing is not a scary thing, it should be practiced more so we get better at it. Most people don’t want to ruffle feathers so we keep silent about what is going on in America today, walking around like zombies when we could be talking it over.” — Denise Ward

“No subject is allowed to be discussed for longer than 15 minutes. Any debates that become heated are moved to the outside deck until conversation is frozen down to inside level. All duels are scheduled prior to Christmas gatherings so there are less arguments at that gathering.” — Thaddeus Kozubal

“Remind those around the table that First Thanksgiving was a time when Native-Americans fed newly arrived immigrants who were starving, many were children. Mercy and compassion for the helpless. Lest we forget.” — Rona Malika Robins

“If a hot topic comes up I do my best to divert the conversation. If that’s impossible I try diplomacy in mentioning something about how great it is that in America we can have differing opinions. Passive aggressive tactics come in handy as a last ditch effort.” – Kristen Naylor Ingman

“I try to keep quiet and listen [and] take deep breaths when I’m about to react. My job isn’t to change anyone, rather it’s to offer facts and alternatives, and like Drano, truthful information can slowly unclog the worst stopped-up ideology … Stay loving and be a learner.” — Jonathan Nelson

“I have in my ‘back pocket’ a few questions that will put the conversation back on a congenial track as it veers off into incendiary topics like politics, religion, or the one true way to make barbecue. Questions that have to do with family history or nostalgia seem to work best in re-uniting people.”

Use the comments section below to add your thoughts.