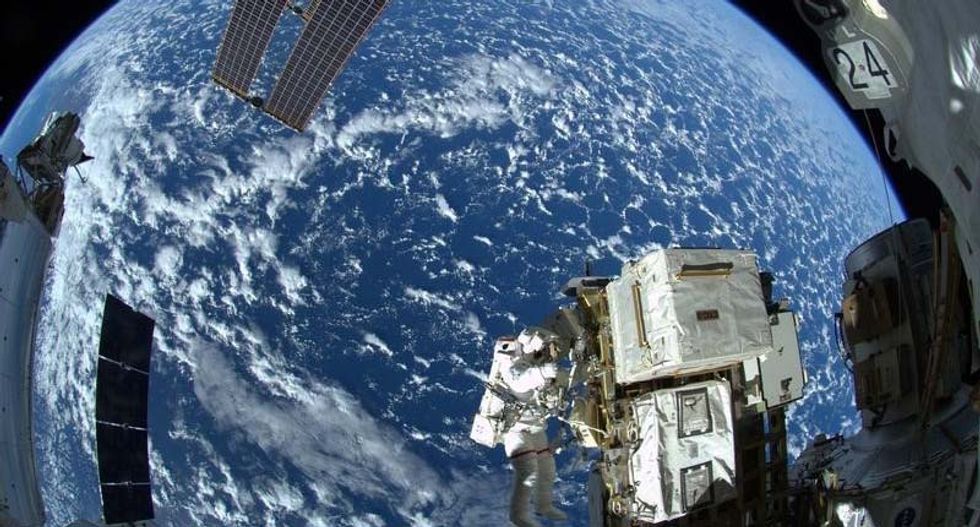 NASA astronaut Reid Wiseman and European Space Agency astronaut Alexander Gerst (not shown) works outside the space station's Quest airlock in the first of three spacewalks for the Expedition 41 crew aboard the International Space Station in this image released October 8, 2014. REUTERS/Alexander Gerst/NASA/ESA/Handout

Reuters) - Three International Space Station crewmen strapped themselves inside a Russian Soyuz capsule on Sunday and flew away from the orbital outpost on a return trip to Earth, wrapping up a 5 1/2- month-long expedition.

The capsule, which departed at 7:31 p.m. EST Monday, was due to make a parachute landing on the frozen steppe of Kazakhstan, northeast of Arkalyk, at 10:58 p.m. EST.

“It’s been an honor and a privilege to spend 165 days up here. With that said, I’m looking forward to heading home,” NASA astronaut Reid Wiseman said during a change-of-command ceremony on Saturday broadcast via NASA Television from aboard the space station.

Joining Wiseman for the return to Earth was outgoing station commander Maxim Suraev of the Russian space agency Roscosmos and German flight engineer Alexander Gerst from the European Space Agency. The trio blasted off together on their voyage to the space station aboard the same capsule on May 28.

“It’s not easy to part from the station,” the three exiting crew members radioed to Russian flight controllers as the Soyuz slipped away from its berthing port, according to a translator.

The replacement crew scheduled to join them – cosmonaut Anton Shkaplerov, NASA astronaut Terry Virts and Italy’s Samantha Cristoforetti – are due to launch on Nov. 23 from the Baikonur Cosmodrome in Kazakhstan.

The space station, which orbits about 260 miles (418 km) above Earth, is a $100 billion research laboratory owned and operated by a partnership of 15 nations.

“They say this is the most complex machine that humanity has ever built,” Gerst said during Saturday’s ceremony. “Even after half a year onboard, it is impossible for me to fathom how complex it is to actually operate this machine. What I did see and what I am sure of is this is the finest example of teamwork that I’ve ever seen in my life.”