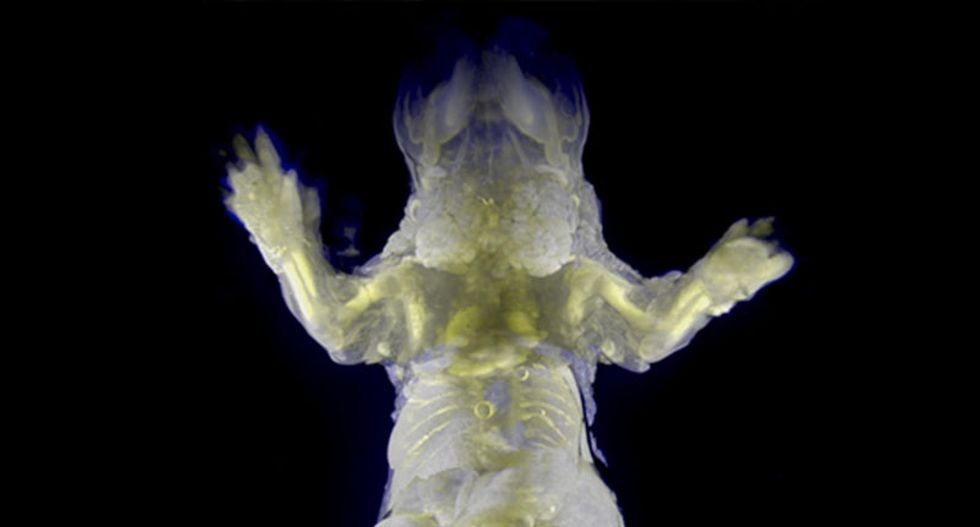 This picture released from Japanese research institute Riken on November 6, 2014 shows a decolorized mouse body and some organs glowing with fluorescence protein at the Riken laboratory. (AFP Photo)

Invisibility may still be the stuff of fictional works like Harry Potter, but researchers in Japan have developed a way to make mice almost totally transparent.

Using a method that almost completely removes colour from tissue -- and kills the mouse in the process -- researchers say they can now examine individual organs or even whole bodies without slicing into them, offering a "bigger picture" view of the problems they are working on.

The techniques will give scientists a "new understanding of the 3D structure of organs and how certain genes are expressed in various tissues," said Kazuki Tainaka, the lead author of a research paper published in the US-based Cell magazine.

"We were very surprised that the entire body of infant and adult mice could be made nearly transparent," he said in a statement issued by Japanese research institute RIKEN and its collaborators

The work, which also involved the University of Tokyo and the Japan Science and Technology Agency, focuses on a compound called haem, the constituent that gives blood its red colour and is found in most tissues of the body.

The process involves pumping a saline solution through the mouse's heart, pushing the blood out of its circulatory system and killing the creature.

A reagent is then introduced, which works to divorce the haem from the haemoglobin that remains in the animal's organs.

The dead mouse is skinned and soaked in the reagent for up to two weeks to complete the process.

A sheet of laser light, which can be set to penetrate to a specific level, builds up a complete image of the body, much as a 3D printer creates physical objects in layers.

"Microscopes have so far allowed us to look at things in minute detail, but that has also deprived us of the context of what we are looking at," Tainaka told AFP.

The new method, which cannot be applied to living things, "will give us details while enabling us to grasp the bigger picture," he said.

Hiroki Ueda, who led the research team, said in the statement that the method "could be used to study how embryos develop or how cancer and autoimmune diseases develop at the cellular level.

It was hoped the method would lead "to a deeper understanding of such diseases and perhaps to new therapeutic strategies".

"It could lead to the achievement of one of our great dreams: organism-level systems biology based on whole-body imaging at single-cell resolution."