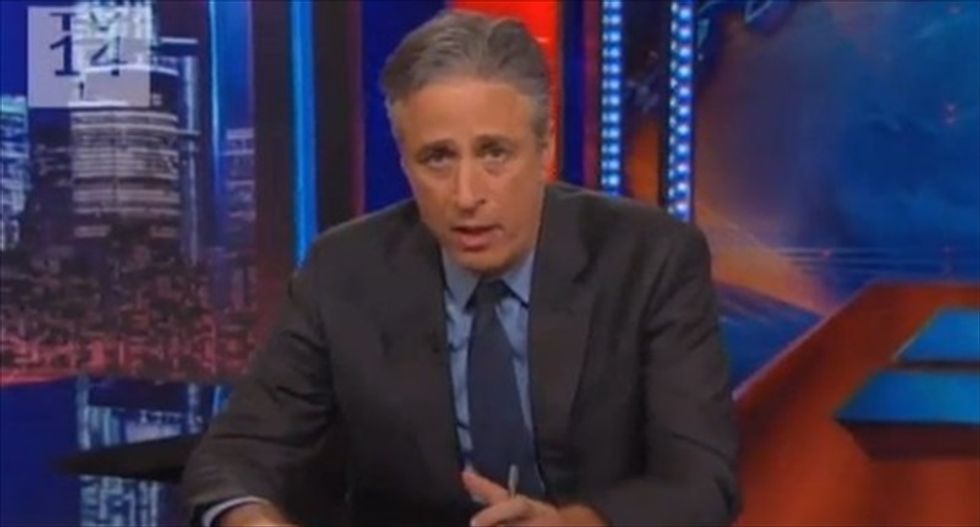 Jon Stewart said on Thursday's Daily Show that Democrats' midterm election strategy, flawed as it was, had historical roots.

"It's a well-known political maneuver known as the Chickensh*t Gambit," Stewart explained sarcastically. "It's named, of course, for D*ckless H. Chickensh*t -- who, when he was asked whether he supported the Emancipation Proclamation, famously said, 'Huh? What? Huh?' and then had to pretend to be hard of hearing for the rest of his life."

Senate Democrats, Stewart said, tried to play a cynical game leading up to Tuesday's midterm elections: they got President Barack Obama to agree with their strategy of holding off on votes regarding issues like immigration reform and the Keystone XL pipeline so that they could score political points by either ripping the issue or ripping Obama for the delay.

Among those making use of the "gambit," Stewart said, were Senators Mark Begich (D-AK), Kay Hagan (D-NC), Mary Landrieu (D-LA), and Mark Pryor (D-AR). But unfortunately for most of them, they lost anyway.

"The only one who hasn't lost is Landrieu; she's going into a run-off. But she's gonna lose," Stewart predicted. "It's like Democrats came up with this plan to produce Springtime for Hitler. But only because they really thought it was a good f*cking play."

Stewart also criticized the timing of these kinds of moves, saying that congressional calendars are already packed enough that it's nearly impossible to find an ideal moment for anything.

"Basically there's one day in March when, weather permitting, you think you can get sh*t done without politically harming one thing or the other," he argued.