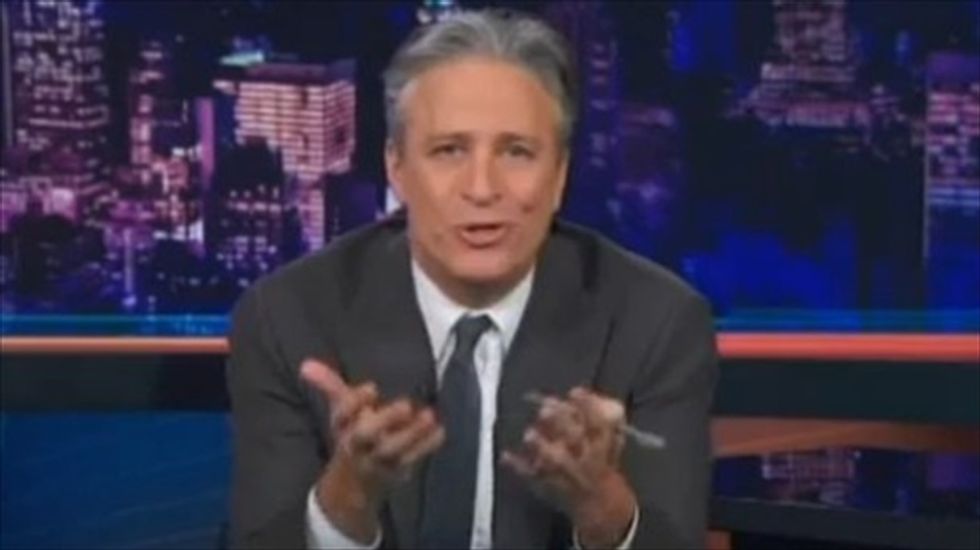 On Sunday, Romney appeared on Face The Nation to criticize the prospect of Obama signing an executive action to help the country's undocumented immigrant population.

"The president has got to realize that he lost this last election round," Romney said at the time. "The American people spoke loud and clear."

The irony was not lost on Stewart, who argued that Obama wasn't the only one with a hearing problem.

"You know, I remember the American people saying quite loudly and clearly a few years back, 'Ixnay on the Itt-may,'" Stewart said to Romney. "And yet here you are on the elevision-tay talking it-shay."

Stewart then issued a faux apology before zinging the former Massachusetts governor.

"You look great, you haven't aged at all," he said. "What's your secret? Probably not being president."

Stewart then mocked Fox News for constantly accusing Obama of "shredding the Constitution" since his election, saying Obama must be "doing it article-by-article, Saw-style."

Yet at the same time, he noted, GOP lawmakers were openly throwing around the possibility of impeaching Obama if he signed an executive order similar to those signed by Republican presidents Ronald Reagan and George H.W. Bush, neither of whom were accused by their party of providing "amnesty."

"See, you don't govern through executive order," Stewart said sarcastically. "You govern through shutdowns and impeachment. But riddle me this, Batman: how do you conduct impeachment hearings when you've shut down the government?"