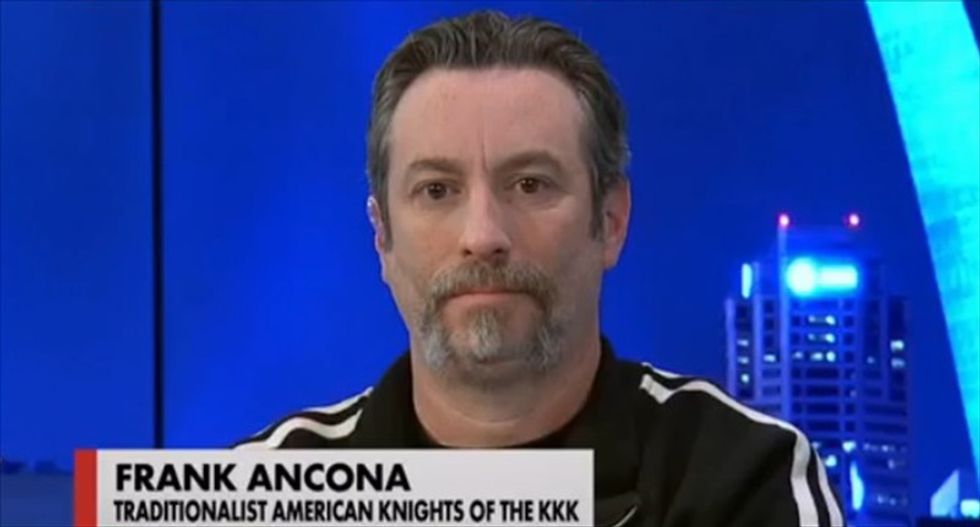 Traditionalist American Knights of the KKK leader Frank Ancona on 'All In with Chris Hayes' on Nov. 12, 2014 [MSNBC]

The leader of a Ku Klux Klan group told MSNBC host Chris Hayes on Wednesday that St. Louis-area residents have supported their campaign threatening to use "lethal force" against protesters they feel act violently in the aftermath of the upcoming grand jury decision regarding Ferguson police officer Darren Wilson.

"It kind of came about from hundreds of calls we've been getting from residents in St. Louis County concerned with things that they've seen on social media," Traditionalist American Knights of the KKK head Frank Ancona explained. "Random attacks on whites, D.C. sniper-style shootings, police officers being threatened that their wives are gonna be raped, and that they're all targets."

Ancona did not cite specific evidence of any of these alleged threats.

The Riverfront Times reported that Ancona's group has been passing out flyers calling demonstrators "terrorists" and saying, "We will use lethal force as provided under Missouri law to defend ourselves."

Ancona told the Times that the demonstrators, who have been protesting against local law enforcement for not pursuing a case against Wilson for shooting and killing 18-year-old Michael Brown on Aug. 9, were "the best recruiters since [President Barack] Obama" for his organization.

"It's a bit ironic for you to talk about how bad violence is when you're telling people that you're going to arm yourselves and shoot. You're advising people of what the law is for being able to shoot someone," Hayes told Ancona on Wednesday. "That seems, I think, to everyone seeing this like incitement. It seems like you are attempting to bring about the exact same thing that you're saying you're against."

But Ancona stumbled after telling Hayes that he has had off-the-record conversations with police regarding the ongoing tension in the region.

"A lot of them are very frustrated with how the governor has sided with the criminals in a lot of instances," Ancona said.

"I'm telling you, I have friends who know people in law enforcement," Ancona replied, backtracking. "Let's just put it that way."

"Protesters haven't shot and killed anyone," she said. "Protesters haven't harmed people. So why are we responding to them? Because it's 'these types of protesters.' You're setting the tone that 'these type of people' need to be responded to in this way, and that opens the door for the Klan to go in and to recruit people. I lay it at the feet of law enforcement -- how they prosecuted this case, how they responded to peaceful protesters, I lay it at their feet. This is their fault."

"The first guest didn't help the conversation and the dialogue at all that's going on in St. Louis," Dotson told Hayes, only alluding to Ancona's appearance.

He also responded indirectly to Brown, saying reports indicating that police had spent thousands of dollars on "cluster grenades" and other equipment were being taken out of context.

"To characterize it as an offense is not correct at all," he said. "Really what it is is the tools that we have to keep us all safe in our community."

Watch the discussion, as aired on MSNBC on Wednesday, below.

The Riverfront Times posted the flyer distributed by Ancara's group , which can be seen below.