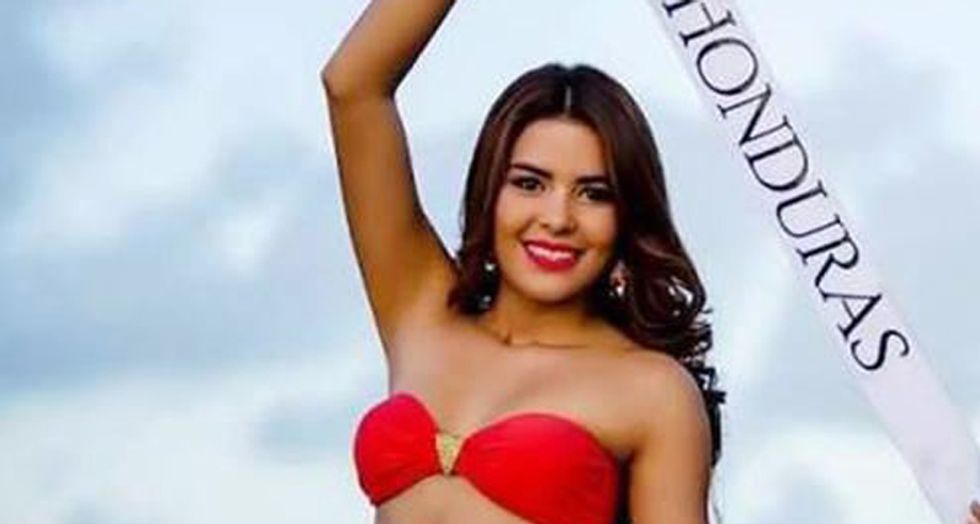 Miss Honduras was fatally shot as she tried to escape her sister's jealous boyfriend, police and reports said, hours after the siblings were found dead beside a river.

Maria Jose Alvarado, 19, who had been due to fly to London to compete in the Miss World beauty pageant, disappeared with her sister Sofia Trinidad Alvarado six days ago after a party, sparking an exhaustive search.

La Prensa newspaper reported that police were investigating whether Trinidad's boyfriend, Plutarco Ruiz, shot Sofia Trinidad in the head after he became jealous when he saw her dancing with another man. He then reportedly shot her beauty-queen sister twice in the back as she tried to flee.

Chief detective Leandro Osorio said the bodies of Maria Jose and her 23-year-old sister had been found buried along the banks of the Aguagual River in the town of Arada, in violence-plagued Honduras's northwest.

Police arrested Ruiz and his alleged accomplice on Tuesday, seizing a Colt-45 pistol and two vehicles.

Security Minister Arturo Corrales said there was "no doubt" that Ruiz was behind the crime and that he had been helped by another man, Aris Maldonado Mejia.

"We think that Plutarco led the crime, materially and intellectually," Corrales said.

Police are investigating additional suspects who they believe tried to help cover up the shooting, including by cleaning and repainting a pick-up used in the crime.

Organizers of the Miss World pageant, which begins Saturday, sent their condolences and announced a tribute this weekend in honor of the slain sisters.

"We are devastated by this terrible loss of two young women, who were so full of life," Julia Morley, the pageant's chairwoman, said in a statement.

"We will be holding a special service with all of the Miss World contestants on Sunday, where we will be honoring the lives of Maria Jose Alvarado and Sofia Trinidad, and say prayers for them and their family."

Miss World organizers said they also planned to donate money to a children's home in Honduras in the two women's memory.

Alvarado, who turned heads with her gleaming smile and wavy chestnut hair, was in her last year of university at the Northern Polytechnic Institute, where she studied computer science.

She had participated in beauty contests since she was a young girl.

She was also known in Honduras for her work as a model on popular TV game show "X-0."

She and her sister disappeared outside the northwestern city of Santa Barbara after attending a birthday party for the accused Ruiz at a local resort.

The riverbank where their bodies were discovered was located about 20 kilometers (12 miles) away.

The sisters were last seen leaving the party in a champagne-colored car.

Their mother, Teresa Munoz, says the same vehicle was at her home earlier that day to pick up Maria Jose, who had just arrived from the capital Tegucigalpa, about 200 kilometers away.

Munoz had made a tearful plea for the safe return of her daughters after their disappearance.

Residents of Santa Barbara held a demonstration demanding their release Tuesday, when hope still lingered that they were alive. Wearing white T-shirts with the girls' pictures on them, they marched with a banner reading "May God protect them."

Honduras, a poor Central American country of eight million people, has the world's highest homicide rate, at 90.4 per 100,000 inhabitants in 2012.