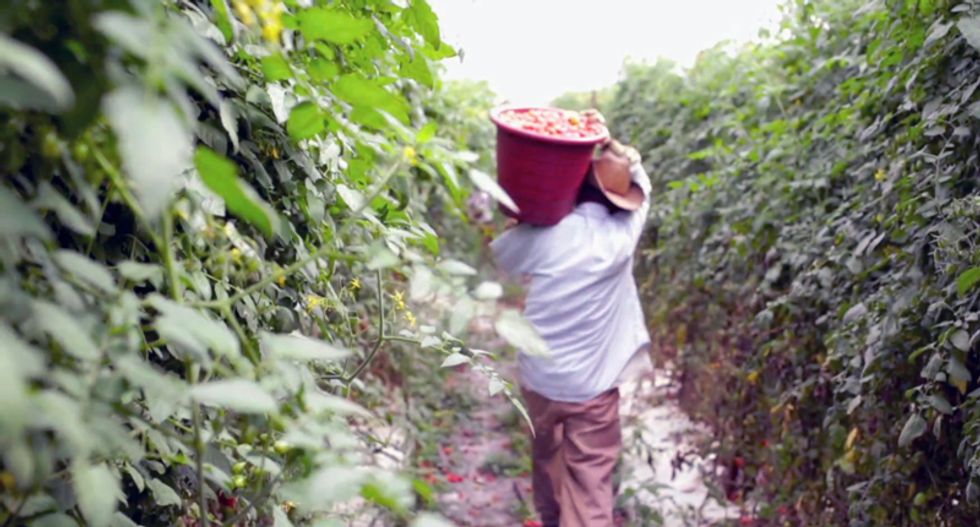 Food Chains, a new hard-hitting documentary about the battle between Florida farmworkers and the giant supermarket and fast food conglomerates, is being released in select theaters and on iTunes today.

The film, co-produced by Eric Schlosser, the investigative journalist behind Fast Food Nation and Food, Inc., focuses on the work of the grassroots Coalition of Immokalee Workers (CIW), a group of tomato pickers from Southern Florida dedicated to the plight of farm laborers across the country.

In this PBS interview, Schlosser explains how writing about the fast food industry led him to the strawberry and tomato fields, and why he hopes those involved in the food movement will make the “abuse of poor, immigrant workers” a bigger part of their advocacy.

Farmworkers are among the lowest paid workers in America, averaging about $12,000 per year in wages, and many of them, especially women, have been subjected to human rights abuses in the fields. In its review of the film, The New York Times calls Food Chains an “emphatic and empathetic documentary” that presents farm laborers as modern-day slaves.

The CIW aims to change their plight with its Fair Food Program, which partners with growers and retailers to improve working conditions for farm workers.

By signing on to the Fair Food Program, supermarkets and fast food restaurants agree to pay a penny more per pound of tomatoes and to refuse to buy tomatoes from farms with human rights violations. To date, 12 major retailers have signed on: Walmart, Whole Foods, Trader Joe’s, McDonalds, the YUM Brands, Chipotle, Burger King, Aramark, Compass Group, Bon Appetit, Sodexo and Subway.

Food Chains, which is coproduced by the actress Eva Longaria, follows the CIW as they stage a six-day hunger strike at the headquarters of Publix, Florida’s largest supermarket chain that refuses to sign on to the Fair Food Program.

Lucas Benitez, a farmworker and activist with the CIW, told BillMoyers.com about the success of the coalition’s program earlier this year: “[W]e’re creating a new landscape in the agricultural industry where mutual respect is the rule and harmony in the workplace is the goal. Now, workers can report any abuse without fear of retaliation and are receiving the first pay increase in decades.”

Together with the Alliance for Fair Food, the filmmakers have organized protests against Publix and Wendy’s, two companies that have not signed on to the Fair Food Program, to be held in conjunction with the film’s release. They are also asking individuals to pledge their support for fair food.

Watch a trailer for the film, and learn where it is playing near you.