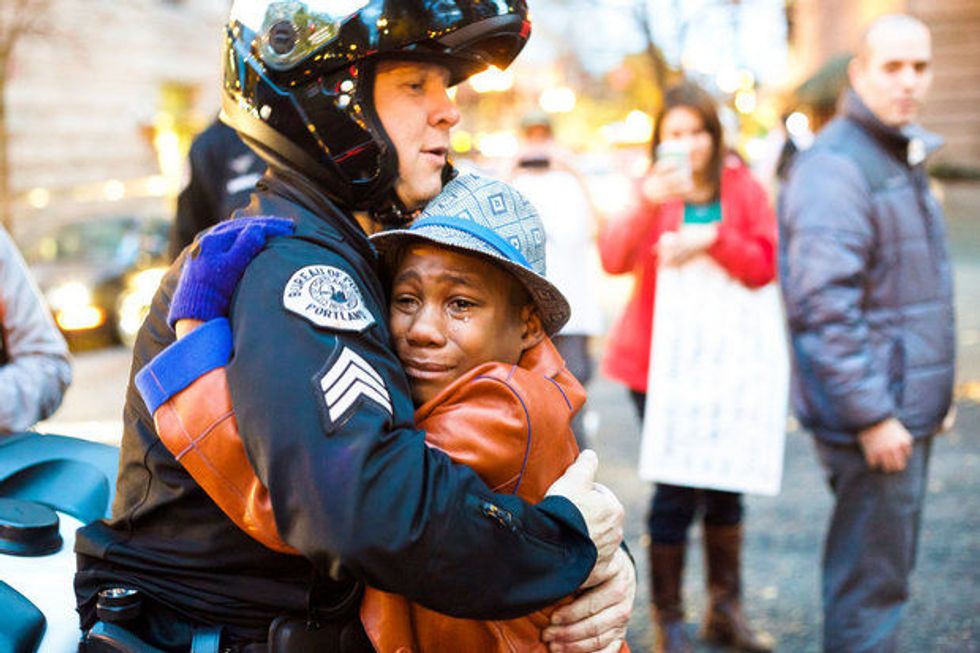 An image of a police officer hugging a tear-streaked black youth at rally protesting the grand jury decision in Ferguson, Missouri has gone viral on Facebook and other social media, generating over 150,000 shares.

According to the Oregonian, the photo was taken on Nov. 25 by photographer Johnny Nguyen and shows young Devonte Hart, who was adopted by a couple named Sarah and Jennifer Hart.

The family was attending a rally protesting the Ferguson grand jury's decision not to press charges against Officer Darren Wilson for the shooting of unarmed black teen Michael Brown in August.

In a Facebook post, Jennifer Hart wrote, "We hit the streets (Nov. 25) with the intention of spreading love and kindness, and to remind (ALL) people that they matter in this world...I noticed Devonte was struggling. Tears. He wouldn't speak. He was inconsolable. My son has a heart of a gold, compassion beyond anything I've ever experienced, yet struggles with living fearlessly when it comes to the police and people that don't understand the complexity of racism that is prevalent in our society."

She continued, "It was one of the most emotionally charged experiences I've had as a mother. He trembled holding a Free Hugs sign as he bravely stood alone in front of the police barricade. Tears rushing from his eyes and soaking his sweater, he gazed upon them not knowing how they would react. After a while, one of the officers approached him and extended his hand. Their interaction was uncomfortable at first."

Then, she said, "He asked Devonte why he was crying. His response about his concerns regarding the level of police brutality towards young black kids was met with an unexpected and seemingly authentic (to Devonte), 'Yes. *sigh* I know. I'm sorry. I'm sorry.' The officer then asked if he could have one of his hugs."

The officer was Portland Police Sgt. Bret Barnum, who told the Oregonian that he saw the boy holding a "Free Hugs" sign and simply asked if he could have one.

According to the website Papertrail.co.nz, Devonte was born already addicted to the drugs his birth mother took freely during pregnancy.

"By the time he was 4 years old he had smoked, consumed alcohol, handled guns, been shot at, and suffered severe abuse and neglect," wrote Papertrail's Chloe Johnson.

"He knew only a handful of words, including f*ck and shit, and he struggled to identify with the names of food, body parts and every day objects," Johnson reported. "Devonte was a violent toddler and his health was weighed down by a heavy list of disabilities."

Jennifer Hart and her wife Sarah adopted Devonte and his two siblings in 2007.

“He inspires me every single day. He has proven doctors, psychologists and teachers wrong. His future is most definitely not bleak, he is a shining star in this world. His light shines bright on everyone on his path," said Jennifer.

“People always tell us how lucky he is that we adopted him," she said. "I tell you, we most certainly are the lucky ones. Yes indeed he is living proof that our past does not dictate our future.”