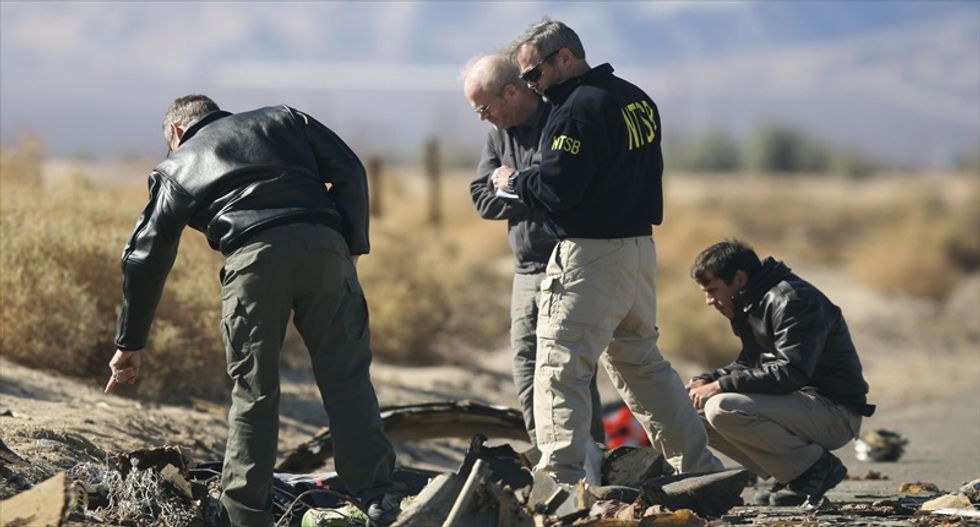 Investigators from the National Transportation Safety Board (NTSB) look at wreckage from the crash of Virgin Galactic's SpaceShipTwo near Cantil, California on Nov. 2, 2014. Photo by David McNew for Reuters.

The probe of Virgin Galactic’s space plane crash in California hinges on a central mystery: Why a seasoned test pilot would prematurely unlock the craft's moveable tail section, setting off a chain of events that led to destruction of the ship and his death.

The National Transportation Safety Board was expected this week to complete its initial field investigation into Friday's ill-fated test flight of SpaceShipTwo, a rocket-powered vehicle built to take paying passengers for rides into space.

The ship broke apart at an altitude of about 50,000 feet (15,000 meters) and crashed in the Mojave Desert, 95 miles (150 km) north of Los Angeles, moments after its separation from the special jet aircraft that carries the spacecraft aloft for its high-altitude launches.

The pilot, Pete Siebold, 43, survived the crash, parachuting to the ground with a shoulder injury. The co-pilot, Mike Alsbury, 39, was killed.

NTSB officials have said it was Alsbury, flying for the ninth time aboard SpaceShipTwo, who unlocked the tail section, designed to pivot upward during atmospheric re-entry to ease descent of the craft.

Alsbury was supposed to have waited until the ship was traveling at 1.4 times the speed of sound, fast enough for aerodynamic forces to hold the tail in place until time to actually move it into descent position, sources familiar with the spacecraft's operation told Reuters.

Instead, for reasons unknown, he released the locking mechanism roughly 9 seconds into a planned 20-second firing of the space plane's rocket engine, while the ship was moving at about Mach 1, the speed of sound, the sources said.

The result was disastrous. About 4 seconds after the tail was unlocked, it began to swivel out, and the vehicle was ripped apart, scattering debris over a 5-mile (8-km) swath of desert northeast of the Mojave Air and Space Port.

A second command to deliberately move the tail upward after unlocking it was never given.

The tail's so-called “feathering” system, developed and patented by aircraft designer Burt Rutan, is designed to increase the vehicle’s surface area and slow down the ship so it can fly like a badminton shuttlecock as it safely re-enters Earth’s atmosphere from space.

The NTSB expects it will take up to a year to piece together exactly what triggered the accident and recommend changes to equipment, procedures, operations and other factors that may have caused or contributed to the crash, safety board Chairman Christopher Hart said.

Initial interviews, collection of debris from the crash site and preliminary examination of evidence were expected to be wrapped up by the end of the week.

A human-factors expert joined the investigation team on Monday to look at cockpit displays, checklist design, training and other pilot operational issues. Siebold, the surviving pilot, had not yet been interviewed due to medical concerns, Hart said on Monday.

NTSB’s preliminary accident investigation report was expected in about 10 days.

(Reporting and writing by Irene Klotz; Editing by Steve Gorman and Mohammad Zargham)