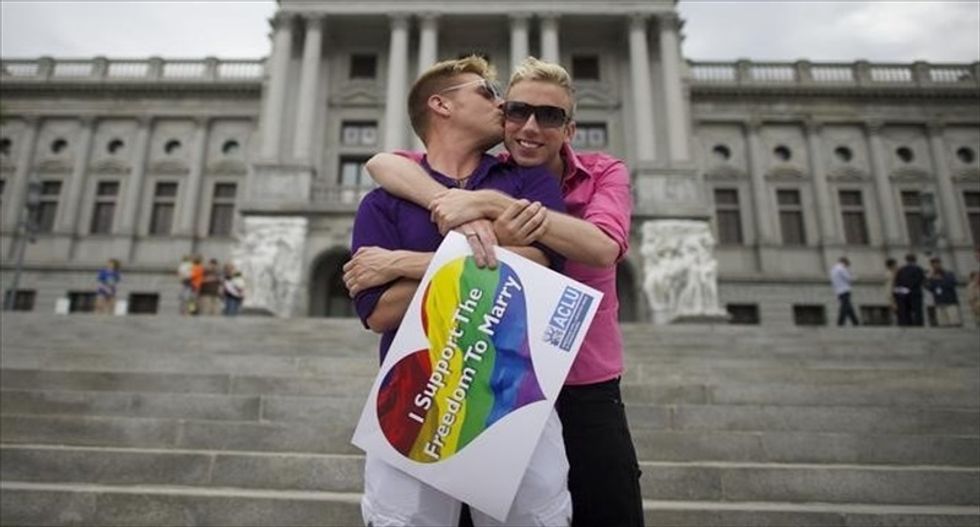 Mike Woods, 28, and Brandon Parsons, 30, embrace on the Pennsylvania State Capital steps following a rally with gay rights supporters after a ruling struck down a ban on same sex marriage in Harrisburg, Pennsylvania on May 20, 2014. Photo by Mark Makela for Reuters.

A federal appeals court on Thursday upheld gay marriage bans in Kentucky, Michigan, Ohio and Tennessee, reversing the trend in federal courts to strike down such bans and piling pressure on the Supreme Court to take up the matter.

The ruling by the 6th Circuit U.S. Court of Appeals is the first ruling by a federal appeals court upholding bans on same-sex marriage.

When the Supreme Court in October refused to intervene in the issue, all other appellate courts that had weighed in had struck down state bans on gay marriage.

This new decision could force a showdown at the Supreme Court and lead to a nationwide ruling on the constitutionality of such bans.

Advocates on both sides of the issue immediately called for the Supreme Court to take up gay marriage and make a definitive decision for the entire country.

"We will be filing for Supreme Court review right away and hope that through this deeply disappointing ruling, we will be able to bring a uniform rule of equality to the entire country," the American Civil Liberties Union said in a statement.

Michigan Attorney General Bill Schuette applauded the ruling from the 6th Circuit court as a victory for Michigan's constitution.

"The U.S. Supreme Court will have the final word on this issue. The sooner they rule, the better, for Michigan and the country," Schuette said in a statement.

Two judges on the three-judge panel at the sixth circuit joined the majority decision in the ruling, while the third dissented.

Judge Jeffrey Sutton, writing the majority decision, said plaintiffs favoring same-sex marriage have not made the case to constitutionalize the definition of marriage.

Sutton wrote that "it is demeaning to the democratic process" to presume voters who had passed referendums against same-sex marriage are incapable of deciding sensitive issues.

He also said it was up to legislators, not life-tenured judges, to weigh the benefits and costs of whether to preserve a traditional definition for marriage.

A string of rulings around the United States this year has expanded gay marriage to a total of more than 30 states, and same-sex couples have been getting marriage permits in a number of states where they had long been denied the right.