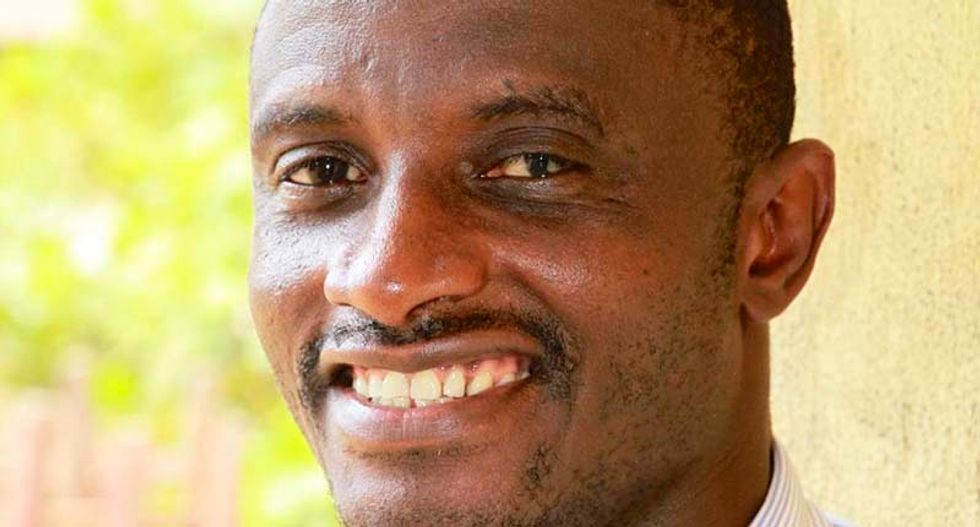 Martin Salia is pictured in this handout photo taken February 2013 and provided by the United Brethren (UB). REUTERS/Jeff Bleijerveld, director of Global Ministries/UBCentral.org/Handout

LANDOVER HILLS, Md. (Reuters) - Martin Salia, a surgeon from Sierra Leone who died in a Nebraska hospital earlier this month after contracting Ebola in his homeland, was remembered as a humanitarian and a hero at his funeral in Maryland on Saturday.

The 44-year-old doctor was born and raised in Sierra Leone and lived as a permanent resident of the United States with his wife and two sons in New Carrollton, Maryland, outside of Washington, D.C.

He returned to Sierra Leone in August to help treat victims of Ebola, a deadly virus that has killed at least 5,689 people, mainly in West Africa in its latest outbreak.

"By dedicating himself to promoting the health of others, Martin reflected the essential American belief that we have obligations to one another," President Barack Obama said in a statement read by a White House representative during the services at a Roman Catholic church in Landover Hills.

Salia was the second person to die in the United States while being treated for Ebola. Several others have survived after aggressive treatment at hospitals in Nebraska, Atlanta, New York and Maryland.

Salia's treatment was delayed when his first two tests for Ebola falsely showed no presence of the virus in his blood. A third test came back positive.

By the time the doctor arrived at Omaha's Nebraska Medical Center on a specially equipped airplane arranged by the U.S. State Department, two weeks had elapsed since he contracted Ebola.

The medical staff reported his kidneys were failing and his breathing labored. The blood transfusions and experimental drugs they gave him were too late to save him. He died Nov. 17 and was cremated.

"The greatest heroes are the people who choose to face danger," Ron Klain, the White House's Ebola Response Coordinator, said as he eulogized Salia. "We need more people like Martin Salia."

Earlier this week, the World Health Organization said Ebola deaths in Sierra Leone were rising even while the disease is being brought under control in neighboring countries of Liberia and Guinea.

"We are losing too many people," he said at the funeral.