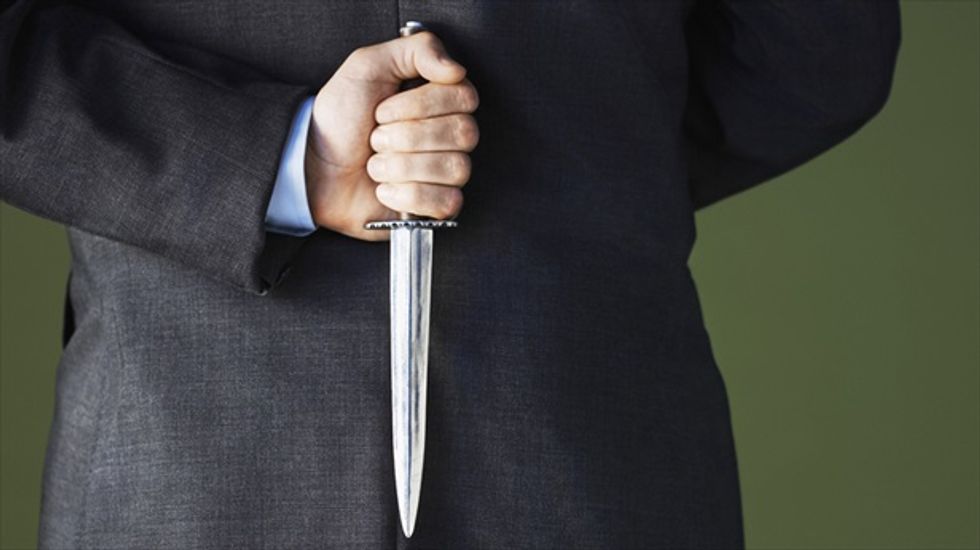 A businessman holding knife behind his back [Shutterstock]

Researchers at Birmingham City University have identified six types of killer who use Facebook to commit crimes, in the first-ever study on how the social networking site can affect criminal behaviour.

Dr Elizabeth Yardley and Prof David Wilson, from the university’s centre of applied criminology, analysed cases of murder in which the site had been reported as a significant factor. They found 48 examples from across the world, including that of Wayne Forrester, an HGV driver, who killed his wife Emma in 2008 after reading her Facebook posts in which she claimed that they had separated and she wanted to meet other men.

They identified the types of killer as: reactor, informer, antagonist, fantasist, predator and imposter.

A rector is as straightforward as it sounds: someone who sees something that enrages them on Facebook, and they react violently – often with lethal force. An informer uses Facebook to tell others they intend to kill the victim, that they have killed the victim, or both. An antagonist engages in hostile exchanges on Facebook that escalate into face-to-face, sometimes fatal, violence.

For fantasists, the line between make believe and reality becomes blurred and murder may be a way of maintaining the fantasy or preventing others from discovering the deception. A predator creates and maintains a fake profile to lure a victim and meet them offline; and an imposter posts in the name of someone else. This could be the victim in order to create the illusion they are still alive or another person to gain access to and monitor the victim’s profile.

LaShanda Armstrong, an example of an informer, asked for forgiveness on her Facebook page after having argued with her partner before driving into the Hudson river, killing herself and her three children. She had posted: “I’m sorry everyone forgive me please for what I’m gonna do … This is it!!!”

Yardley, lead researcher, said she and her colleague wanted to see whether murders in which Facebook was reported to have been involved were any different to other homicides. They found that on the whole they are not – victims knew their killers in most cases and the crimes echoed what they already knew about this type of crime.

But they did find that their sample differed from general murder trends and characteristics in some respects: the age profile of victims and perpetrators was relatively low; women were over-represented as victims; there was a relatively high proportion of murder-suicides; and those involved in murders could not all be described as marginalised.

Yardley said she did not believe social media should be blamed for the crimes and the report makes clear its dislike of the term “Facebook murder”.

“We conclude that ‘Facebook murder’ is not a useful or conceptually valid term for criminologists examining the role of social networking sites in contemporary homicide,” they said.

Yardley added that there was nothing inherently bad about social media. “Facebook is no more to blame for these homicides than a knife is to blame for a stabbing. It’s the intentions of the people using these tools that we need to focus upon.”