Stephen Colbert: Don't feed the homeless -- they'll come to expect it whenever they see humans 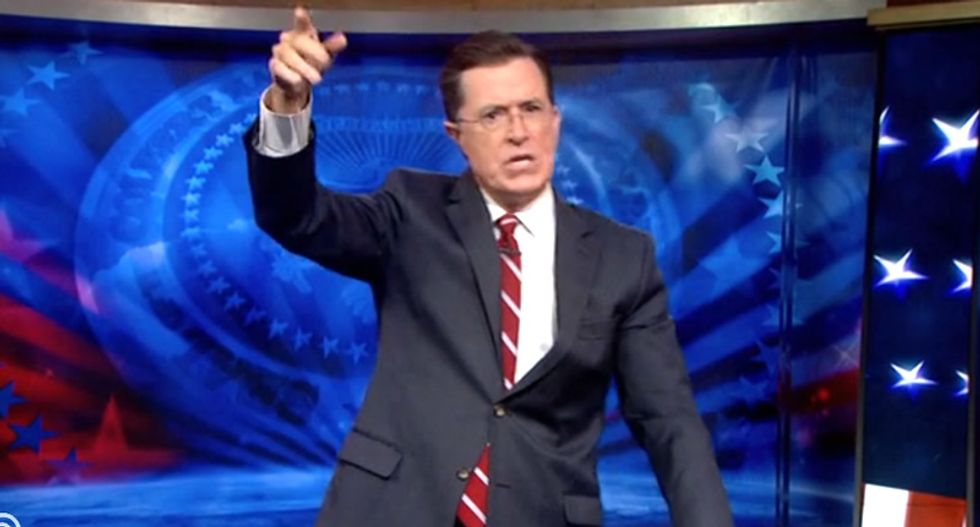 On last night's episode of The Colbert Report, Stephen Colbert discussed the case of a 90-year-old homeless advocate in Fort Lauderdale, Florida who was arrested for feeding the homeless.

Arnold Abbott heads the group Love Thy Neighbor, which has been feeding the homeless in the city for over 20 years. However, he and two pastors were arrested over the weekend for violating a new city law that outlaws sharing food with homeless people in public.

"Busted!" Colbert said. "For feeding the homeless in public! I say if the homeless want to eat, they ought to do so in the privacy of their own wherever those people live."

"This monster cannot claim he didn't know better, because he was doing from a church kitchen," he continued. "For as Jesus said in Matthew 25:35, 'I was hungry and you gave me something to eat. I was thirsty and -- look out! The cops are here! Hide the loaves and the fishes!'"

"And I'm glad to hear," Colbert said, "that police took him down with maximum force."

"The police came in and said, 'Drop that plate!'" Abbott told a local reporter. "Like I was carrying a weapon!"

"Food is much worse than a weapon in Florida," Colbert added. "If George Zimmerman had fed a guy in a hoodie -- he'd be in jail."

"Besides, Fort Lauderdale is really looking out for the homeless," Colbert said, before cutting to a clip of Fort Lauderdale's mayor, who said "the experts have all agreed, if you're gonna simply feed 'em outdoors, to get 'em from breakfast, to lunch, to dinner, you're enabling that cycle of homelessness."

"Yes," Colbert replied. "By feeding them, Abbott's causing them to be homeless. He's really a food 'pusher.' And for decades, this serial offender was down in his 'cook lab' getting people hooked on 'the product,' or as it's known on the streets, 'grub,' 'nosh,' 'chow,' 'chasing the nutritional dragon.' Some of these people were so addicted, they needed their fix three times a day."

"And with hardened cooks like Grandpa here, the homeless will just want more and more. They'll come to expect food whenever they see humans around. They're smart little critters -- some of them even know how to pry the lids off of trashcans."

"So Fort Lauderdale," Colbert concluded, "do what I do at the end of the day -- tie you humanity in a bag and hang it on a tree. That way they can't get at it."