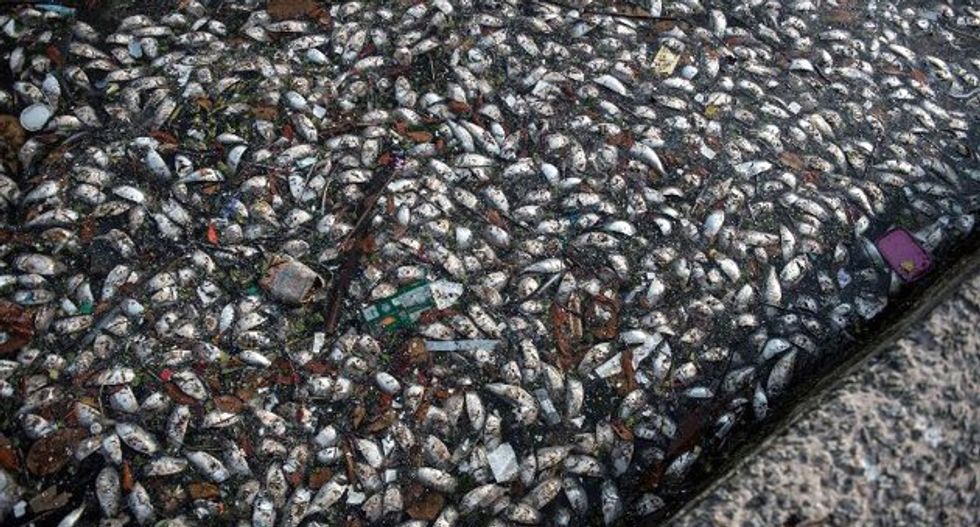 Thousands of dead fish have begun mysteriously washing up in the polluted Rio bay that will host sailing events at the 2016 Olympics -- and experts are at a loss to explain why.

Guanabara Bay has already been the subject of concern amongst sailors who are to compete in Rio because of the human sewage that gets pumped into its waters.

The International Olympic Committee (IOC) has expressed confidence that Guanabara will be fit for purpose by the time of the games.

But the recent appearance of thousands of dead fish, and the foul stench of their rotting carcasses, has attracted further scrutiny with the Olympics less than two years away.

Scientists are baffled by the phenomenon but say there is no evidence so far to suggest pollution is the cause.

The foul odor first took over the usually peaceful Paqueta Island, where cars are banned and the population of 4,500 people travels on horseback or bicycle among the only baobab trees in Brazil.

With the help of a bulldozer, a municipal company has removed 20 tonnes of dead sabalo fish -- from the Clupeidae family of herrings and sardines -- as well as four dead sea turtles.

"Tests showed that this is not a matter of chemical or toxic water pollution," Rio do Janeiro State University oceanographer David Zee told AFP.

Leandro Daemon of the National Institute for the Environment, or INEA, agreed that water testing had not identified any toxic chemicals or any unusual change in the water's pH (potential of hydrogen), salinity or oxygen.

"We have no answer yet about what happened, but we can certainly exclude the hypothesis of a chemical pollution killing the fish," he said.

But not everyone is so sure.

Worried fishermen and islanders are pointing the finger at the petrochemical activities of state giant Petrobras.

"We want to know why so many fish have died. The rotten smell is horrible and there are many flies on the island. The authorities tell us nothing," said Vilma Leocadio of the Paqueta citizens' association.

"We are afraid, we do not bathe in the sea any more and do not buy fish here."

"I do not encourage you to step in the water with all those dead bodies of fish. We see them dying," she said.

Five of the fish were sent Tuesday to the Federal University of Rio de Janeiro's biology department for analysis, and the results will be announced in a week.

Experts want to know if there are any signs of pollution or disease in the entrails or gills.

One hypothesis is that the culprit is predatory fishing.

At this time of year, fishing is prohibited, but it is common for fishermen to still work, catching fish like sabalo that have a lower market value, Zee said.

But the expert said the likeliest scenario was that the deaths are caused by "thermal pollution" of the water.

"Sabalo are very sensitive to any lack of oxygen. Warm water temperatures such as those recorded several days ago -- ranging from 27 to 30 degrees Celsius (81 to 86 Fahrenheit) -- in shallow water decrease the solubility of oxygen," Zee said.

He noted that Paqueta is located at the bottom of the Rio bay, where water circulation and exchange is more difficult, a phenomenon exacerbated by the low tide.

"What is striking is the duration of this mortality and also the high temperature of the water," said biologist Mario Moscatelli, who has studied the bay's waters for 20 years.

"I flew over the area in early October, and fish were floating. At first, we thought they were thrown into the sea by fishermen. But before too long, I saw them dying in a way that seemed they were missing oxygen."

He said the sabalo, being more sensitive, are the first fish to die in the Rodrigo de Freitas Lagoon, which contains sea water carried through a canal in Rio's southern zone.

"But in case of chemical contamination, other species will die," he said. "We have more questions than answers. We must wait for the results of the analysis."