To Agilkia and beyond! Comet landing site for Rosetta spacecraft is named 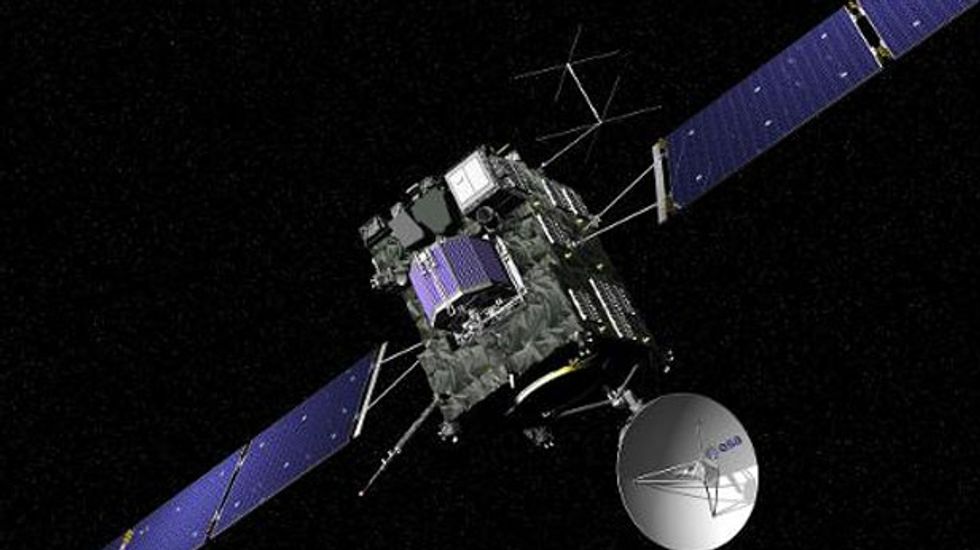 Will space historians one day say "Agilkia" with the same awe as they utter "Tranquility Base," where in 1969 Man first walked on the Moon?

Agilkia -- called after an island on the Nile -- has been selected as the name of the site for the first landing on a comet, the European Space Agency (ESA) said on Tuesday.

The historic event will take place on November 12, when ESA's Rosetta spacecraft will send down a robot lab, Philae, to Comet 67P/Churyumov-Gerasimenko.

Rosetta is named after the stone that in the early 19th century helped Egyptologists decipher the mystery that was hieroglyphics.

Philae, in turn, was named for the Nile island in southern Egypt where in 1815 an obelisk was found that was key to understanding the Rosetta stone.

And Agilkia is a nearby island that became the new home of Pharaonic temples transferred from Philae when the Aswan Dam threatened to flood the complex.

"The relocation of the temples of Philae island to Agilkia island was an ambitious technical endeavour performed in the 1960s and 1970s to preserve an archaeological record of our ancient history.

"On November 12, we'll be attempting a unique comet landing, an even more ambitious endeavour to unlock secrets of our most remote origins."

Rosetta is in close orbit around the comet at a distance of some 400 million kilometres (250 million miles) from the Sun.

Philae will descend to the comet and harpoon itself to the surface to carry out a series of scientific tests.

Astrophysicists believe that comets are remnants of ancient ice and dust left over from the formation of the Solar System.

Experts see them as time capsules of primeval material that may yield insight into how the planets formed after the Sun flared into light.

The comet is shaped rather like a rubber duck, with a large lobe and small lobe. The landing site -- until now codenamed J -- is roughly where the duck's "brow" would be.

The moniker "Agilkia" was chosen in a contest won by Alexandre Brouste from France, who will go to mission control in Darmstadt, Germany, to see the operation at close hand.

More than 8,000 entries from 135 countries were received in just a week.

They included names in ancient and modern languages, from mythology and works of science fiction, and jokey references to bath toy ducks, potatoes and "even the cartoon dog Snoopy," the agency said.