Toned, tattooed Mickey Rourke returns to ring at 62 -- and wins 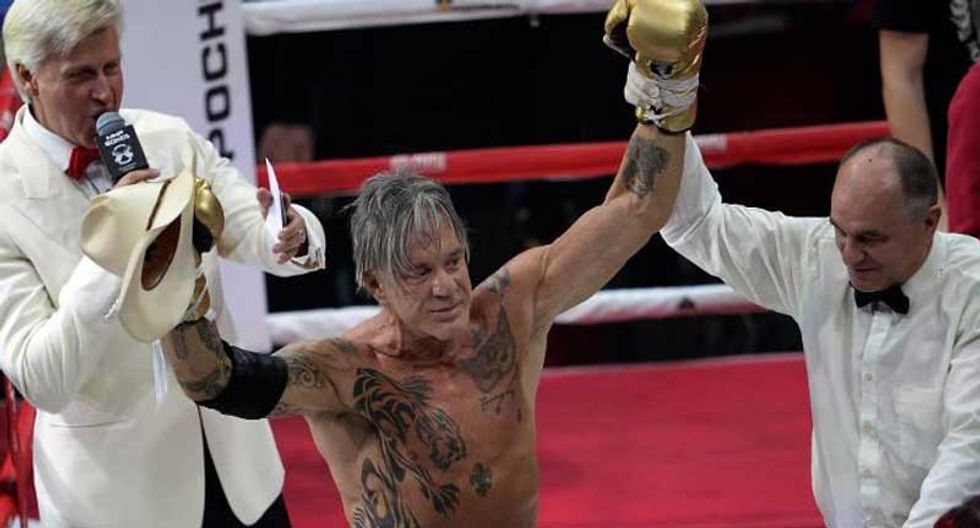 Hollywood actor Mickey Rourke (C), 62, raises his fists after knocking out US professional Elliot Seymour, 29, in Moscow on November 28, 2014 (AFP)

Hollywood actor Mickey Rourke picked up his boxing career on Friday night in Moscow at 62 years old -- and beat his far younger opponent in the second round.

Rourke, wearing red trunks with a Russian flag, unleashed a barrage of blows against 29-year-old Elliot Seymour, an American professional boxer, and the bout was halted.

It had been set to go five rounds of two and a half minutes each but in the end lasted about four minutes.

Prior to the match, wearing only a cowboy hat and turquoise boxer shorts, the actor had showed off his tanned, tattooed and muscly physique to a cheering crowd as he weighed in at 81.3 kilos (179.2 pounds), the same as his rival.

"I'm very happy to be back to the boxing ring. Thank God for letting me do this," Rourke told AFP ahead of the fight.

The organisers said the boxers were receiving "large amounts of money" in fees, declining to give details but saying "everyone is happy".

Rourke was an amateur boxer before his Hollywood career took off and he became a sex symbol star in films such as "9 1/2 Weeks".

He returned to boxing as a professional for eight matches in the 1990s, causing damage to his face that necessitated surgery and changed his appearance.

In 2008 he starred in "The Wrestler" about a washed-up professional wrestler making a comeback, winning a Golden Globe for best actor.

Rourke said he was "terrible" when he made his own comeback in the ring.

"Before, when I fought 18 years ago, I smoked, I didn't run, I got by on my natural ability," he told journalists in Moscow.

He said a boxing match between Russian Ruslan Provodnikov and American Tim Bradley inspired him to take on the challenge of returning to the ring.

"I went to the gym and I was terrible: smoking, you know, drinking," Rourke said.

His conditioning coach, Jordan Feramisco, "broke my ass every day".

- Other fights in Russia -

The actor is a frequent visitor to Russia and has been romantically linked to a Russian-born model, Anastassija Makarenko. He also played a Russian villain in the film "Iron Man 2".

On a visit to central Moscow in August, he bought and wore a T-shirt sporting a picture of Russian President Vladimir Putin.

"I met Putin... and he seems to be a very good guy," he said at the time, according to popular Russian daily Komsomolskaïa Pravda.

Rourke says he always dreamed of fighting in Russia. He hopes to do four more fights, all in Russia.

"I think I'm strong enough," the actor said ahead of Friday's bout.