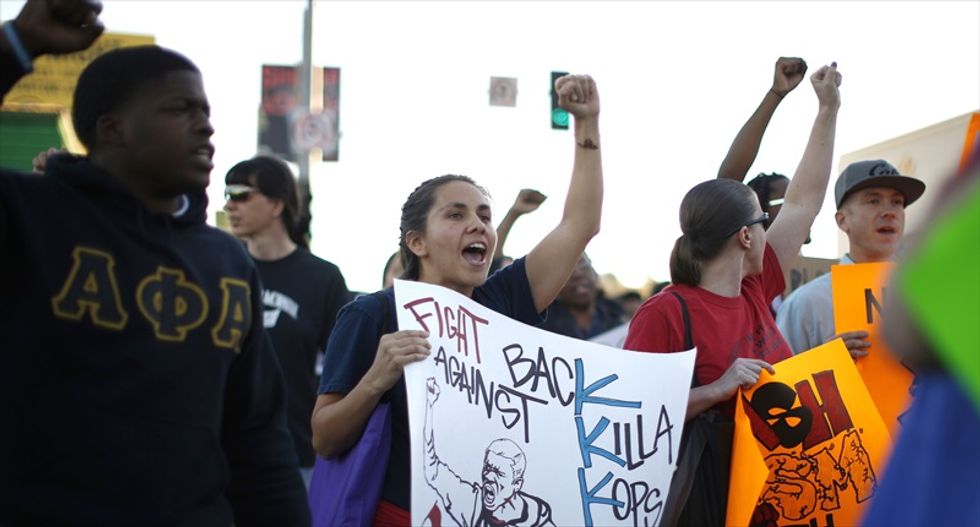 Protesters march during a demonstration, following the Monday grand jury decision in the shooting of Michael Brown in Ferguson, Missouri, in Los Angeles, California on Nov. 25, 2014. Photo by Lucy Nicholson for Reuters.

Demonstrations in solidarity with the family of slain Missouri teen Michael Brown continued on Tuesday night around the country.

Protesters in Los Angeles and New York City had blocked traffic as part of the demonstrations, which were spurred by a grand jury's decision on Monday not to indict officer Darren Wilson for shooting and killing Brown on Aug. 9.

This post will be updated with more live streams throughout the evening.

A march in St. Louis is currently being streamed by St. Louis News Room, and can be seen here.

A stream from Argus News, which has been covering demonstrations from Ferguson since Brown's death, can be seen here.

A demonstration in Los Angeles, as streamed by Brian Hayes, can be seen here.

Another livestream from Los Angeles can be seen here.

The New York City protest march, as streamed by "StopMotionSolo," can be seen below.

A St. Louis station, KSDK-TV, is streaming aerial footage of protests around Ferguson, which can be seen here. Note: This stream does not contain audio.

KNTV-TV is also streaming aerial footage from protests around the Bay Area, which can be seen here.

WFAA-TV in Dallas is also streaming aerial footage of a local demonstration, which can be seen here.