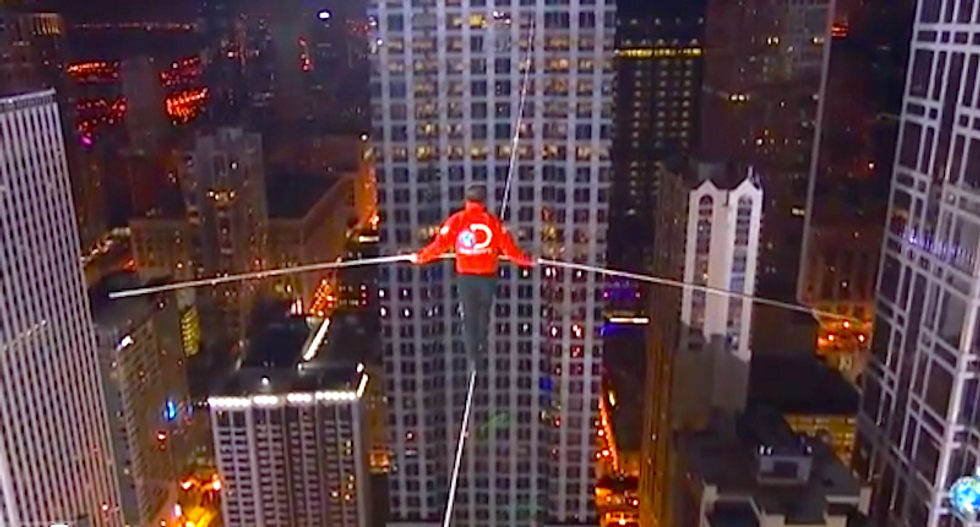 To the cheers of a crowd numbering in the tens of thousands on streets below, Wallenda spoke cheerfully of the view as he walked the wire over the Chicago River. As he approached the end of the first walk he said, "God is in control."

For the first walk on a steel wire, the 35-year-old Wallenda went more than two city blocks uphill, rising at a 19-degree angle, from the west tower of the Marina City towers to the Leo Burnett Building more than 50 stories above the Chicago River.

This was the highest skyscraper walk in the history of the "Flying Wallenda" family of acrobats, and the first time Wallenda attempted a walk at such a steep angle. The walk broke the world record for an incline high-wire walk, according to a representative from Guinness World Records interviewed on the Discovery Channel, which broadcast the event.

For the second part of the walk, Wallenda walked blindfolded from Marina City's west tower to the east tower, breaking the world record for the highest blindfolded high-wire walk.

Wallenda said in an interview on Discovery after the walks that more training had gone into them than into his previous walk across the Grand Canyon.

Wallenda has also previously walked over the brink of Niagara Falls.

"For someone to want to do this escapes me," said Ken Beech, 43, of Cleveland, who came to Chicago to watch the event. "Nobody else is doing this."

"The bloke's got a pair," said David Mitchell, 33, a visitor from London, as he watched Wallenda on the blindfolded part of his walk. "But who knows? It might actually be easier for him to do this blindfolded. He's going to be more focused this way."

Wallenda's great-grandfather, Karl Wallenda, fell to his death at age 73 from a high wire in Puerto Rico in 1978.

Watch video of the stunt posted online by Discovery:

(Reporting by Mary Wisniewski and Agnieszka Zielinska in Chicago; Editing by Mohammad Zargham and Chris Reese)