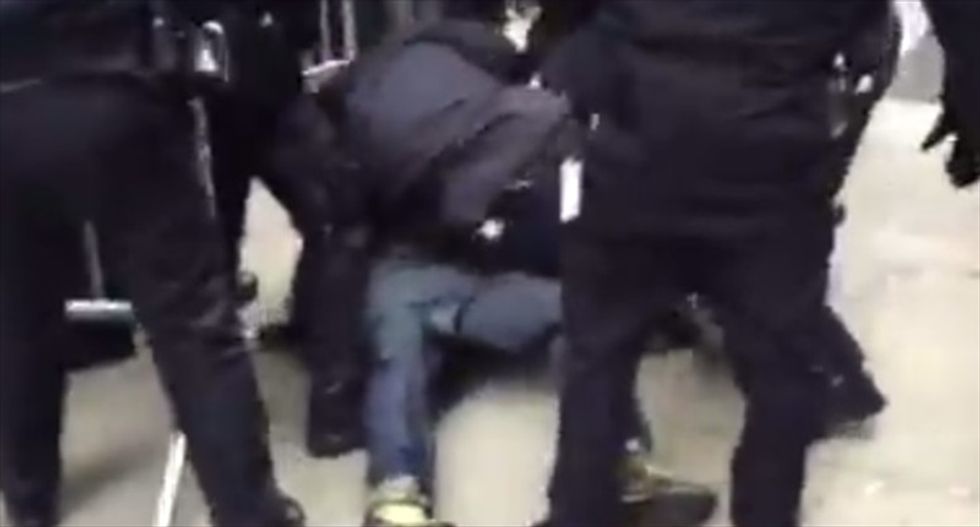 "There was a lot of pushing," one of the protesters, 32-year-old Katherine Brezler, said. "We were inside the fencing used to direct pedestrian traffic. They cornered us from both sides. They just pushed the people to the ground and then took them away."

The protest was one of several actions around the country criticizing police violence in the wake of a Missouri grand jury's decision not to indict Ferguson officer Darren Wilson for shooting and killing 18-year-old Michael Brown this past August.

WNBC-TV reported that seven people were arrested during the protest, which was timed to coincide with the nationally-televised parade.

"We will not tolerate, under any circumstances, any effort to disrupt this parade," Commissioner Bill Bratton said. "This is a national event, a historic event. Anybody who would seek to interrupt it would be callous, indeed, on this very special day."

Brezler posted video of several officers descending upon one unidentified man while moving metal barricades around. She is told by one officer to "get behind the line." When Brezler asks, "what line," she is directed away from what appears to be another arrest.

Demonstrators accused media outlets of neglecting to cover their action, but documented the event online through the #stoptheparade tag, which included accusations of violence by the NYPD:

As well as images from the protest march:

Music producer Tommie Sunshine and his wife also attended the protest. Sunshine told the Dot that, while demonstrators were not being violent, police were overly aggressive while making their arrests.

"We're standing on a very scary moment," he said. "This particular moment in time, I feel like things have gotten completely out of control. I feel like I'm watching the country lose its grasp on itself; I feel like it's losing its mind."

Watch video posted by Brezler on Thursday below.

Al Jazeera America also posted a video covering the protest, which can be seen here.