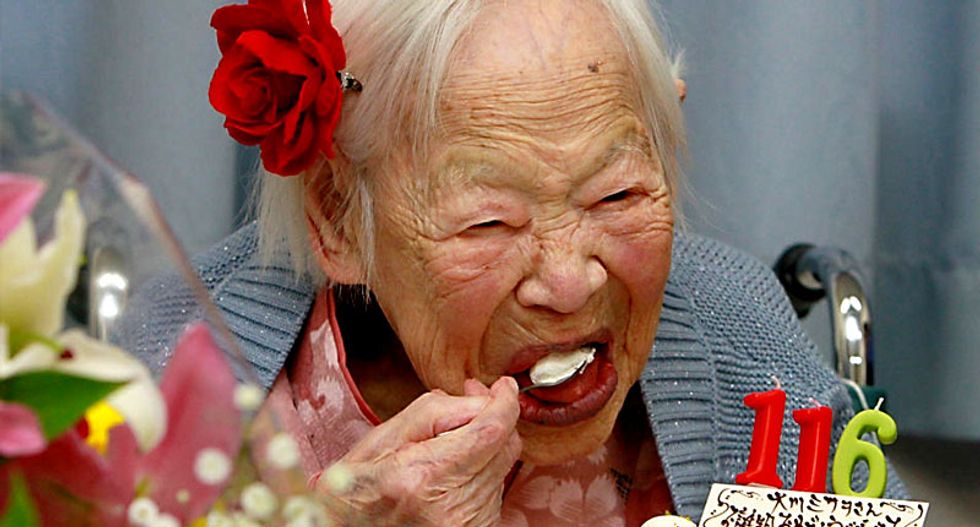 Misao Okawa, the world's oldest woman, eats her birthday cake as she celebrates her 116th birthday at a nursing home in Osaka on March 5, 2014 (AFP)

Think the reason some people live beyond the age of 100 is because of their genes? Think again.

US scientists said Wednesday they've found no genetic secrets shared between a group of 17 supercentenarians, or those who have lived beyond 110.

"From this small sample size, the researchers were unable to find rare protein-altering variants significantly associated with extreme longevity compared to control genomes," said the study led by Hinco Gierman of Stanford University.

The research was published in the November 12 issue of the open-access journal PLOS ONE.

People who live to age 100 and beyond are far less likely to get cancer -- a 19 percent lifetime incidence compared to 49 percent in the general population -- according to background information in the article.

Those who live more than a century also have lower rates of cardiovascular disease and stroke than controls.

There are 74 supercentenarians alive worldwide, and 22 live in the United States.

The 17 people whose genomes were sequenced had lived to age 110 and older.

Their average age at death was 112, and the longest living member of the group lived to age 116.

Fourteen had European ancestry; two were Hispanic and one was African-American.

Even though no genetic clues emerged in this study, scientists said they would make their analysis available to the public as a resource for future research.

"Supercentenarians are extremely rare and their genomes could hold secrets for the genetic basis of extreme longevity," it said.