Black congresswoman: Decision not to indict Darren Wilson was a 'slap in our face' 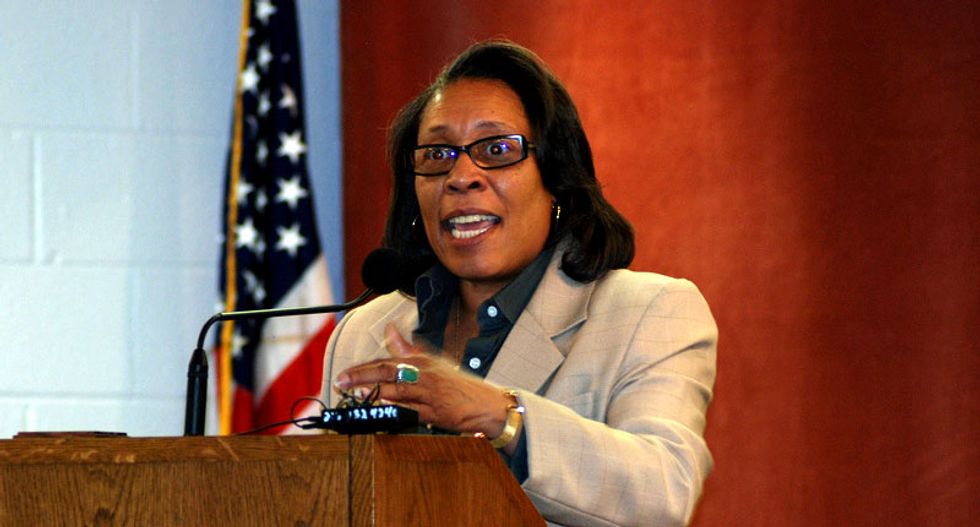 Rep. Marcia Fudge (D-OH) on Monday described the decision not to indict a white police officer for shooting an unarmed black teenager as a "slap in the face."

"Mr. Speaker, we are running out of patience," she said on the House floor. "Last week, the nation waited and hoped that justice would finally be served in the case of Michael Brown. We waited to hear our country say loud and clear: There are consequences for taking the lives of others."

"We waited to hear some reassurance that black and brown boys' lives do matter. But, again, we were terribly disappointed and discouraged."

Police officer Darren Wilson fatally shot Michael Brown during confrontation in August in Ferguson, Missouri. On November 24, a grand jury elected not to indict Wilson, concluding there was not enough evidence he had committed an offense.

"The Ferguson grand jury's decision not to indict former Officer Darren Wilson was yet another slap in our face," Fudge said. "It was a painful reminder that, just like with Trayvon Martin and Tamir Rice, and so many others, law enforcement officers kill our black and brown men and boys without repercussions."

"While some may see the grand jury's decision as the system working as it should, others witnessed what we believe was a blatant miscarriage of justice."

"Where is the closure for Michael Brown's parents? Where is the understanding for the outrage and desperation of the black community?"

"The fact that our country, the greatest country in the world, remains mired in race relations issues in the year 2014 is an embarrassment," the congresswoman said. "We really should consider taking a long look in the mirror before we go to other countries lecturing to them about the need for democracy and tolerance when, here at home, we are unable to fully address our own issues."

"If we are to learn anything from the tragic death of Michael Brown, we must first acknowledge that we have a race issue that we are not addressing. We must have open, honest, transparent conversations about prejudice, racism, and racial threat. We must also lead conversations with law enforcement about transparency, accountability, and community policing."

"All lives have value. As Members of Congress, it is our responsibility to clearly communicate this message to our voters, our constituents, and our neighbors."