Black market copies of 'The Interview' selling for nearly $50 in North Korea: Report 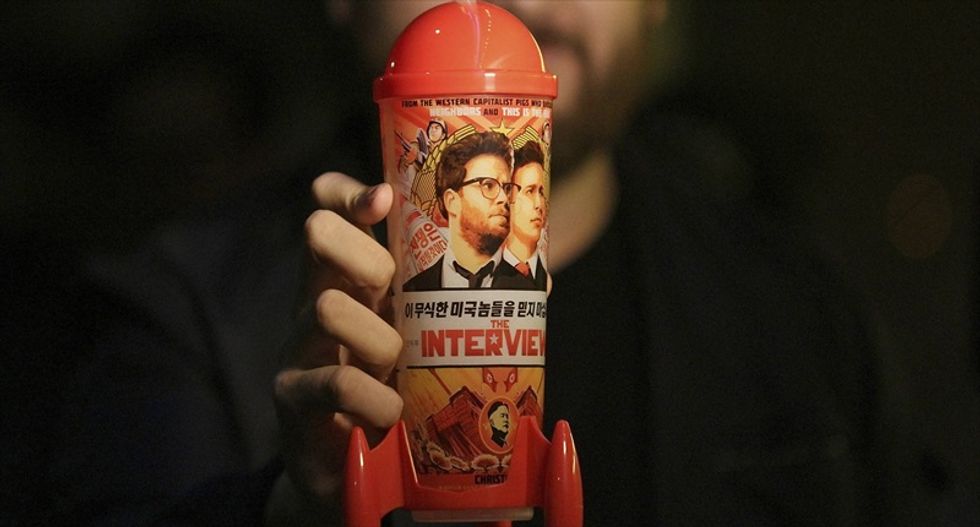 A man holds up a "The Interview" souvenir cup at the Silent Movie Theatre before a midnight screening of "The Interview" in Los Angeles, California on Dec. 25, 2014. Photo by Jonathan Alcorn for Reuters.

Bootleg copies of the comedy The Interview are selling for almost $50 apiece within North Korea, Business Insider reported.

The increasing demand for the film, which depicts the assassination of the country's leader, Kim Jong-Un, has reportedly prompted officials to step up security inspections at the country's borders. Rich Klein, managing director for the Washington, D.C.-based consulting firm McLarty Associates, described the film as "Chernobyl for the digital age."

"There are serious riffs on North Korea's gulags and horrifying human rights record, decades of famine, brainwashing propaganda, and cartoonish self-importance," Klein wrote in a column for the Washington Post. "When The Interview veers in to these sociopolitical realities and with some 45 million people worldwide having watched Rogen’s last two movies, it becomes quite subversive to the Pyongyang government."

The film was released digitally by Sony on Dec. 24 on top of a limited threatrical release, and earned $1 million at the box office. The movie was originally supposed to be released in theaters on Dec. 25, but the company scuttled those plans following a massive cyber-attack against Sony employees and executives and threats of violence against moviegoers before reversing course earlier this week.

U.S. officials subsequently said that they had discovered links between the North Korean government and the "Guardians of Peace," the hacker group that claimed responsibility for the attack. North Korea has denied the allegations and denounced the movie.

As the Daily Beast reported earlier this week, the country has seen an increase in underground selling and trading of foreign media, including American movies and TV shows from China and South Korea, among the country's younger residents. One defector, Park Yeon-Mi, called this younger crowd of bootleggers the "Black Market Generation."

"My generation has a very different view of the society than generations before us," Park told the Beast in October. "Even though many North Koreans risk their lives to access this information, they do it as a kind of rebellion against the regime."

CNN reported that one activist group, the Human Rights Foundation (HRF), plans to distribute the film in the country by dropping it inside North Korean territory via balloon. The group has worked with another defector, Park Sang-Hak, to deposit items like chocolate, copies of the reality show Real Housewives and other films in previous balloon drops.

"Remember, there is no Internet in North Korea, there are no phone lines that can reach other countries," HRF founder Thor Halvorssen said. "It's life known as the 'hermit kingdom'."