1. History proves it's is wrong.

Lest you think celebrating New Year's Eve or New Year's Day is no big deal, The Church of God Faithful Flock proves just how wrong you are in an essay called The Truth About New Year's, which makes GREAT USE OF ALL CAPS AND EXCLAMATION POINTS!

Don't say "it doesn't matter." It does matter to God whether we adopt the customs of the heathen. Your Bible says, "Learn not the way of the heathen" (Jeremiah 10:2).
Does it make any difference if YOU continue observing pagan customs -- like New Year's? IT CERTAINLY DOES! God says so!

So, now you know. 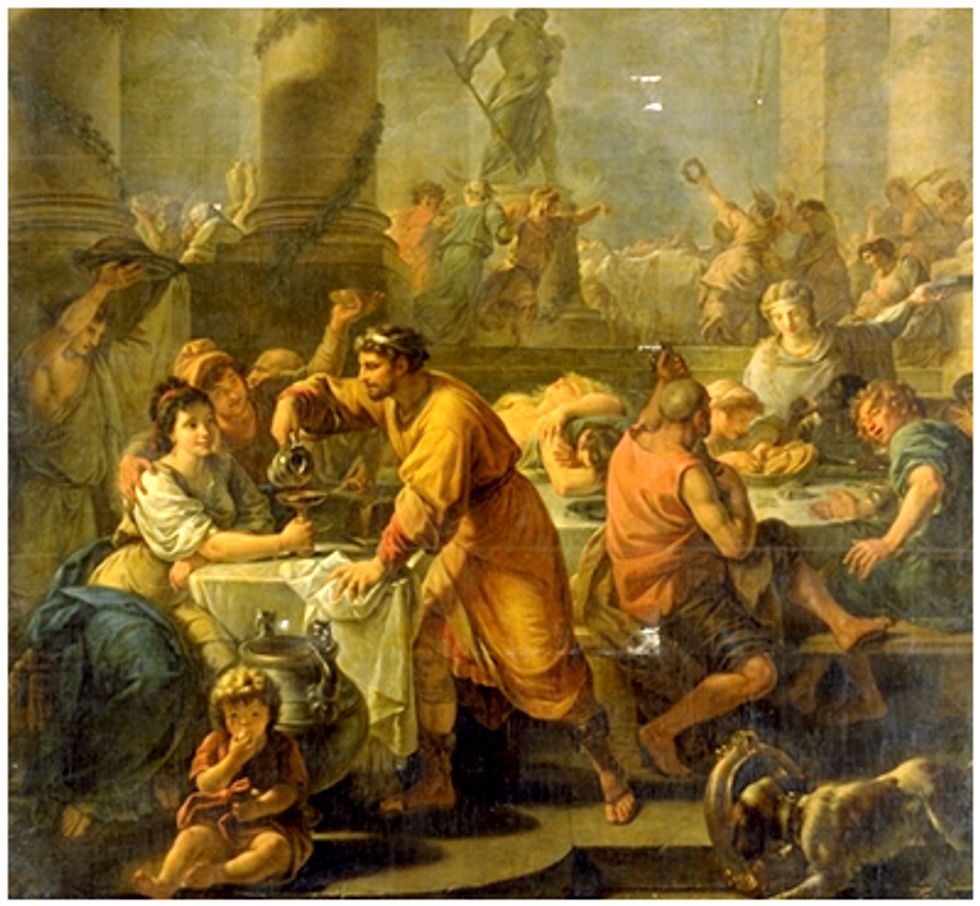 image via The Church of God Faithful Flock[/caption] 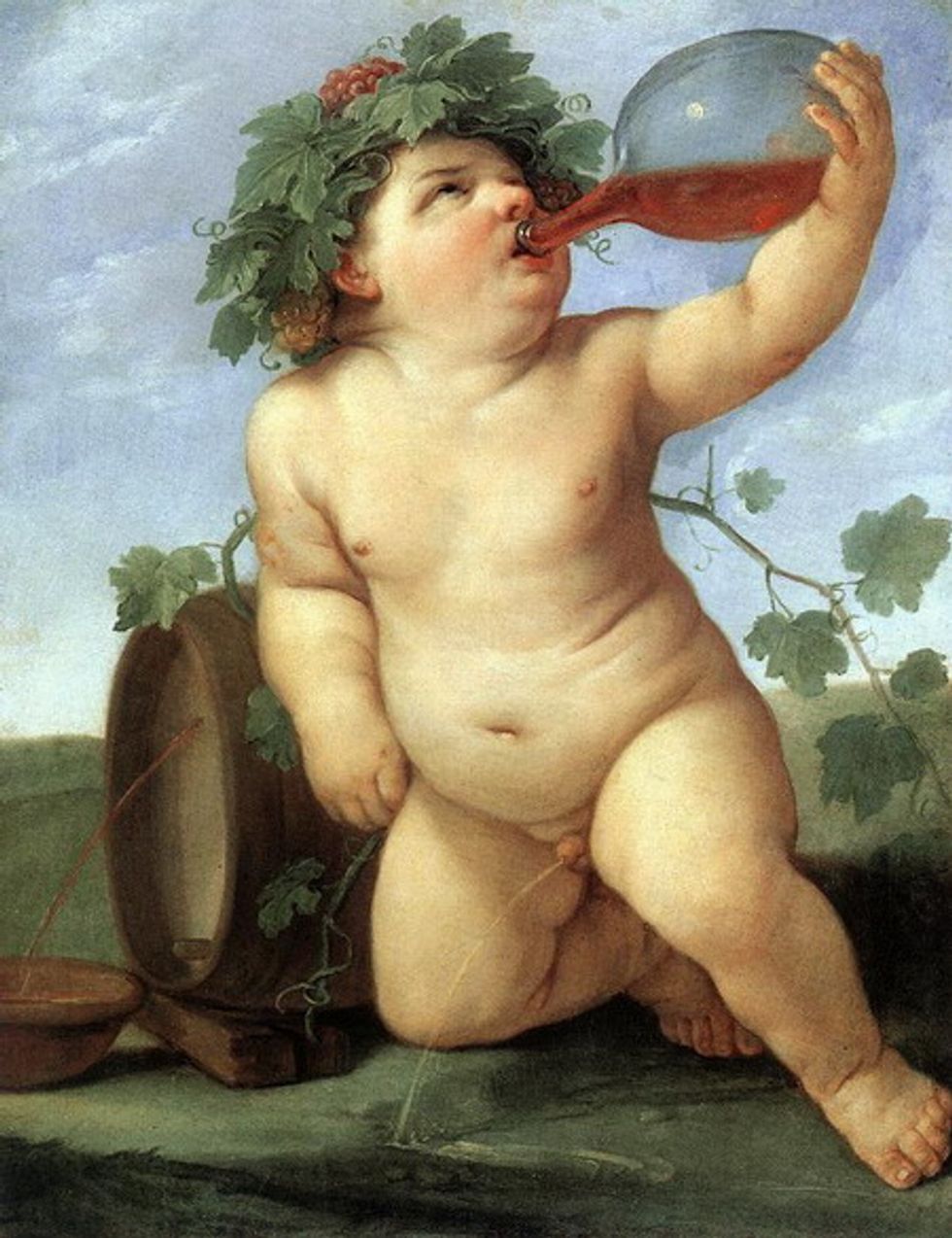 Bacchus god of wine ! [image, description and exclamation point via The Church of God Faithful Flock][/caption]

This guy may look like an adorable baby with a drinking problem, who likes to urinate in public. But he's not what he seems:

Actually the New Year babe is FAR OLDER than he looks. In ancient Greece, it was customary at the great festival of Dionysus to parade a babe cradled in a winnowing basket. This was taken to symbolize the annual (or periodic) rebirth of that god as the spirit of fertility!" (New Year.)

Who was this Dionysus?
None other than Bacchus -- the god of wine!
Today more alcoholic beverages are consumed during the "holiday season" than at any other time of the year! New Year's Eve is noted for its licentious, wild, and wanton partying. People are deceived by riotous pagan holiday spirits -- for the most part emanating from liquor bottles -- all the while calling it "Christian"!

5. Resolutions are some bull-dong and... cocaine. 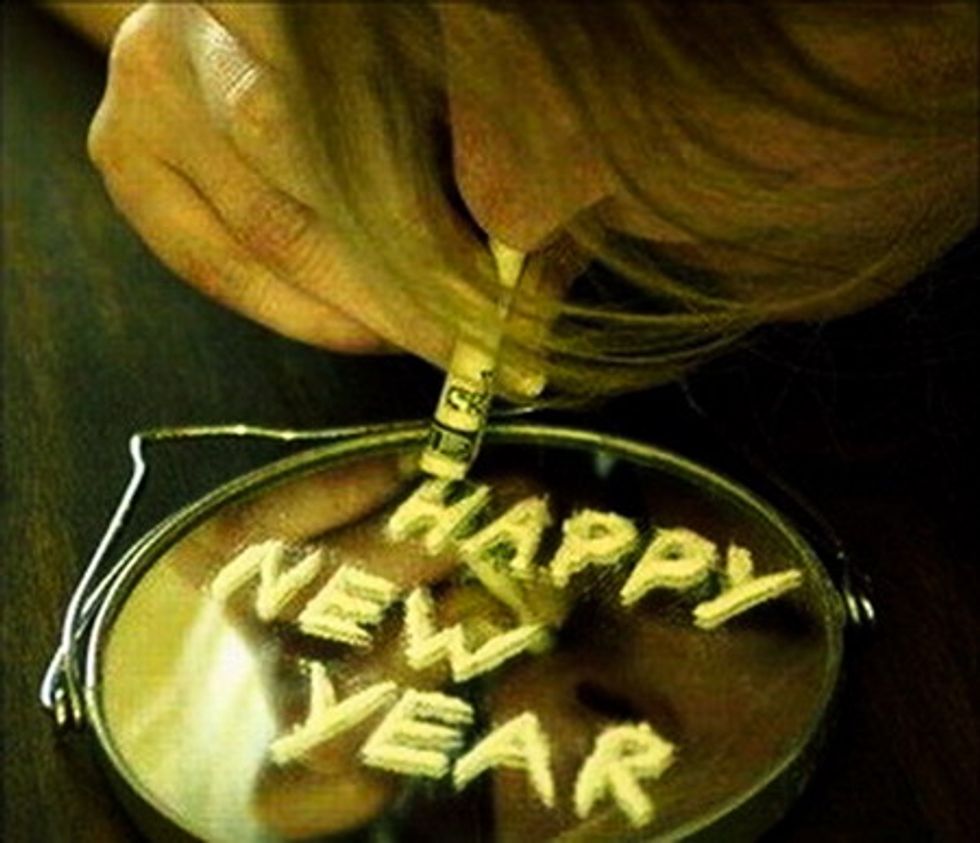 The modern attitude of compromise. Excessive drug use has become common at New Year's Eve events. [image and description via Church of God Faithful Flock][/caption]
This part is so important, stylish CAPS LOCK  exclamation points are insufficient! Instead, a bold font is required:

New Year's resolutions are empty and meaningless, usually trifling matters of jest! Few people make a lasting change. Most people seem to have convinced themselves that God is out of the picture for good. That God is not concerned with their modern revelings, drunken parties, promiscuous behavior!
What does God have to say about New Year's? Does He condone observing a pagan festival? practicing pagan customs in the name of Christ?

image via The Church of God Faithful Flock[/caption]

Apparently, "Another symbol of New Year's celebrations is equally pagan! It is the familiar figure of a white-haired man carrying a scythe." I haven't noticed this, but I'll take the Church's word for it. Anyway, it turns out he represents "The ancient Greek god Cronos. It is from the name 'Cronos' we derive our 'chronograph' which measures time." That's just an etymological nugget from your enjoyment, I think, from The Church of God Faithful Flock. But here's the bad part, which is described through language that is as terrifying as it is vague:

Among the Greek gods, Cronos originally cut a swath of HUMAN SACRIFICE with his sharpened scythe! The "silent reaper" anciently "reaped" little children in horrible episodes of mythical CANNIBALISM! This Greek rite of human sacrifice was adopted by ancient Rome, where human sacrifice was practiced at least until 300 A. D.

When we celebrate New Year's, we are celebrating child-eating!

In fear of a prophecy that he would be in turn be overthrown by his own son, Kronos swallowed each of his children as soon as they were born.

Maybe you get the whole I'm gonna eat my babies out of self preservation thing. I mean, who can really blame him? But he was much more: 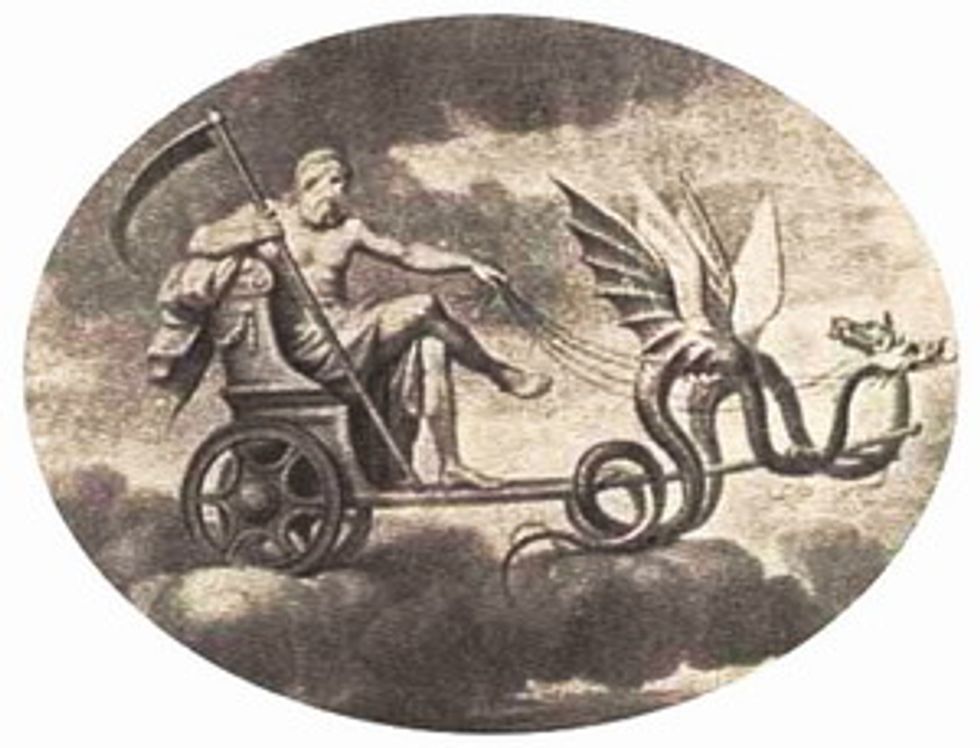 In art, Cronus was depicted carrying a sickle used to gather the harvest, but this was also the weapon he used to castrate his father.

Cronos is no mere child eater. He's a child-eating father-castrator.

7. Immigrants are evil and Catholics are p*ssies.

As you already know, immigrants bring terrible things like Ebola and work forces. But they also brought us New Year's!

But how did such a thoroughly pagan day ever insinuate itself into our modern "Christian" calendar? Read the answer from church history -- about 375 A.D. This is the period Emperor Constantine imposed "Christianity" on the Roman world...
...There were many immigrants into the ranks of the Christians by this time... The Church Fathers discovered to their alarm that they were also facing an invasion of pagan customs. The habit of Saturnalia was too strong to be left behind. At first the Church forbade it, but in vain...
Rather than resist the influence of pagan customs, the Catholic Church fathers compromised!

... The Church finally succeeded in taking the merriment, the greenery, the lights, and the gifts from Saturn and giving them to the Babe of Bethlehem .... The pagan Romans became Christians -- but the Saturnalia remained!

8. God be like you know this s*it ain't Christian.

I'm not sure in which context this occurs, but apparently, "Many people will confess, when forced to, the pagan origin of these days. But they stubbornly REFUSE to stop observing them! God is their Judge!"
The Church of God does a great job of paraphrasing God's feelings about Christian celebrations of the New Year:

Speaking to the modern nations of Israel today, Almighty God says, "As for you, O house of Israel, thus saith the Eternal God; Go ye, serve ye every one his idols and thereafter also, if ye will not hearken unto me: but POLLUTE YE MY HOLY NAME NO MORE with your gifts and with your idols" (Ezek. 20:39).
In other words, God is saying, "Be pagan if you insist; but quit calling it Christian."

9. God is going to do to you what he did to Israel (and, no, that doesn't mean provide you with exorbitant and unconditional aid).

The very same pagan practices God condemns in the Old Testament are being     perpetuated in our modern world today! The very same festivals of paganism adopted by ancient Israel have become an integral part of this modern society!

What was the result of Israel following the customs of the heathen nations around them?
"Therefore the LORD was very angry with Israel, and removed them out of his sight .... and afflicted them, and delivered them into the hand of spoilers, until he had cast them out of his sight .... SO WAS ISRAEL CARRIED AWAY OUT OF THEIR OWN LAND TO ASSYRIA UNTO THIS DAY!" (II Kings 17:18, 20, and 23.)
Israel NEVER returned as a nation to the land of Palestine!
Israel was lost! Its true identity was concealed until modern times!