Chris Rock pens scathing essay on Hollywood's race problem: 'It's a white industry. It just is.' 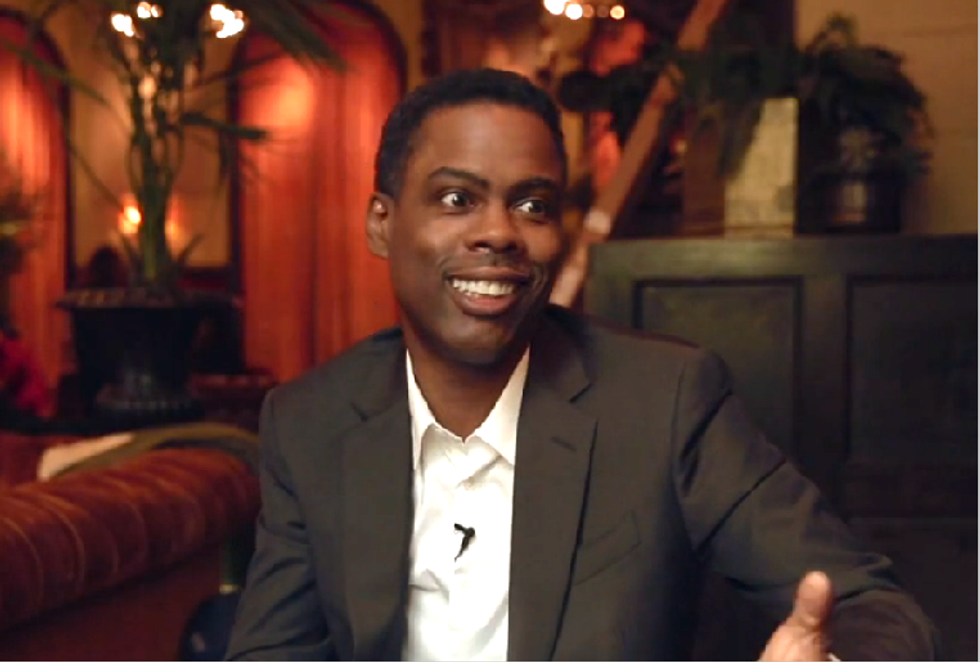 Actor and comedian Chris Rock penned a scathing essay for The Hollywood Reporter about the current state of racial diversity in the entertainment industry. The essay is part of Rock's promotional tour for his new film Top Five, in which a black actor struggles to find good roles that don't require him to play to white stereotypes.

In his essay, Rock took aim at film studios for their virtually all-white power structures, as well as an utter lack of nonwhites in lower-level production jobs.

"It's a white industry," Rock wrote of the movie business. "Just as the NBA is a black industry. I'm not even saying it's a bad thing. It just is."

Rock pointed out that the Hollywood machine is largely based on patronage and favors. He got his start when Eddie Murphy cast him in Beverly Hills Cop II. Keenen Wayans cast Rock in I'm Gonna Git You Sucka and talk show host Arsenio Hall made him a regular guest.

These simple acts of professional kindness can be what makes or breaks a person's career in Hollywood, Rock explained. He himself tries to reach out to young black performers and raise their profile, getting them roles and projects wherever he can.

"She's about as funny as a human being can be," Rock said, "but she didn't go to Second City, she doesn't do stand-up at The Cellar and she's not in with Judd Apatow, so how the hell was she ever going to get through unless somebody like me says to Lorne Michaels, 'Hey, look at this person?'"

Later in the essay, he addressed the industry's lack of professionals of color, from producers and attorneys to writers and accountants, saying, "(H)ow many black men have you met working in Hollywood? They don't really hire black men. A black man with bass in his voice and maybe a little hint of facial hair? Not going to happen. It is what it is. I'm a guy who's accepted it all."

"That's why I've been all over Steve McQueen," Rock explained, referring to the successful black director of 12 Years a Slave.

"I put a microchip in Steve's pocket and track him like an Uber driver. Steve thinks we keep bumping into each other by accident,'Hey, Steve, my man!'" Rock quipped. "I don't care if I have to play a whip, I'm going to be in a Steve McQueen movie. But I digress."

"But forget whether Hollywood is black enough," he continued. "A better question is: Is Hollywood Mexican enough? You're in L.A, you've got to try not to hire Mexicans. It's the most liberal town in the world, and there's a part of it that's kind of racist -- not racist like 'F*ck you, nigger' racist, but just an acceptance that there's a slave state in L.A. There's this acceptance that Mexicans are going to take care of white people in L.A. that doesn't exist anywhere else."

"You're telling me no Mexicans are qualified to do anything at a studio? Really? Nothing but mop up?" he asked. "What are the odds that that's true?"

The people moviegoers never see, Rock said, the ones who decide "how loud the boings are in Dodgeball or whether it's the right shit sound you hear when Jeff Daniels is on the toilet in Dumb and Dumber" are all white.

"(T)hose other jobs?" Rock demanded. "You're kidding me, right? They don't even require education. When you're on the lower levels, they're just about taste, nothing else. And you don't have to go to Harvard to have taste."

Rock conceded that things are improving in the entertainment industry, but slowly. He lamented that he sees so few black women in good roles.

"I go to the movies almost every week, and I can go a month and not see a black woman having an actual speaking part in a movie. That's the truth," he said.

Part of making change, he said, is not accepting anyone else's limitations for you. He compared President Barack Obama to civil rights icon Rev. Jesse Jackson.

Watch video of Rock talking to the Reporter, embedded below: