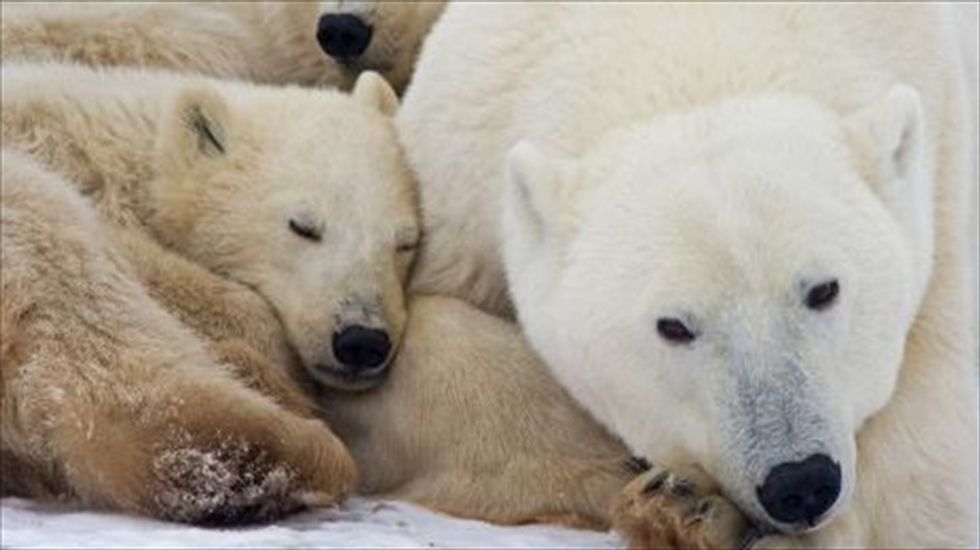 Word spread quickly: a polar bear, then two, were spotted near this remote Inuit village on the shores of Hudson Bay, about 1,800 kilometers (1,120 miles) north of Montreal.

Children were whisked indoors. Hunters armed with rifles set out from Kuujjuarapik on snowmobiles in a blizzard to kill the intruders, before the bears could get close enough to take a bite out of any of the town's 1,500 residents.

Clashes between bears and people so far south of the Arctic were unheard of a century ago.

"Polar Bears were just stories when I was growing up in the 1920s," said elder Alec Tuckatuck.

But there have been more and more sightings of late, he said, as warming forces the world's largest carnivore to abandon its traditional ice-covered hunting grounds and migrate further south.

As of early December, stable ice had not yet formed on Hudson Bay, where the bears would traditionally feast on seals, adding layers of fat that would carry them through the next summer.

The summers in Kuujjuarapik are getting longer and winters are relatively "very short," Tuckatuck commented. "We now have (only) seven months of snow," he lamented.

This is having a dramatic impact on the lives of Inuit and bears alike -- and leading to more unwanted clashes between them, some even further south than Kuujjuarapik.

A polar bear was spotted in 2010 in Shamattawa, Manitoba, about 400 kilometers (250 miles) south of Hudson Bay.

In the Nunavut hamlet of Taloyoak, six intrepid polar bears had to be put down in the past three months after wandering into the community.

"They're not cuddly little Coca-Cola bears," Bob Lyall, of the local Hunters and Trappers Organization, told Canadian media. "They're hungry bears coming through town and looking for food."

In Kuujjuarapik, Inuit hunters have also had to search elsewhere than ice floes for food.

The bay ice, Tuckatuck said, "can break up (underfoot) at any time."

Hunters cannot safely venture onto the ice in search of seals or beluga whales, and so they have turned their sights inland on caribou -- marking a major cultural shift away from the ice that long sustained their people.

In his bright yellow ski pants and parka, Tuckatuck recalls the effects of global warming started to be felt here in the 1980s, long before nations began negotiations to cut greenhouse gas emissions linked to the phenomena.

That's when people here started noticing a change in "the timing of the ice (forming), the timing of melting," said Tuckatuck.

"This could be a climate bomb," said Florent Domine, part of a joint research team formed by France's National Center for Scientific Research and Laval University in Quebec to study Arctic ecosystems.

Squatting in deep snow in minus 25 degrees Celsius (-13 Fahrenheit), the French researcher deploys his instruments in a peat bog a short helicopter trip from Kuujjuarapik.

"If the permafrost thaws quickly, the carbon dioxide and methane it contains will be released into the atmosphere, exacerbating global warming," he explained.

It is a not yet fully understood threat. The UN Intergovernmental Panel on Climate Change's climate projections do not include permafrost emissions.

But Domine said CO2 released from thawing permafrost could double the increase in average global temperatures, which are forecast by the IPCC to rise by four degrees by the end of the century.

He and his team are monitoring the decomposition of ancient plant matter, which are releasing greenhouse gases into the atmosphere from an increasing number of ponds created by thawing permafrost.

With little to be done to forestall this climate anomaly, polar residents see "no choice but to adapt to the changes," according to Tuckatuck.

The upside, he said with a grin, is that Arctic fish stocks are more plentiful.

Polar bears, meanwhile, are finding love in new places, mating with their cousins the Grizzly.

DNA testing confirmed the existence of hybrids in 2006, after a strange-looking bear was shot by a hunter in the Northwest Territories.