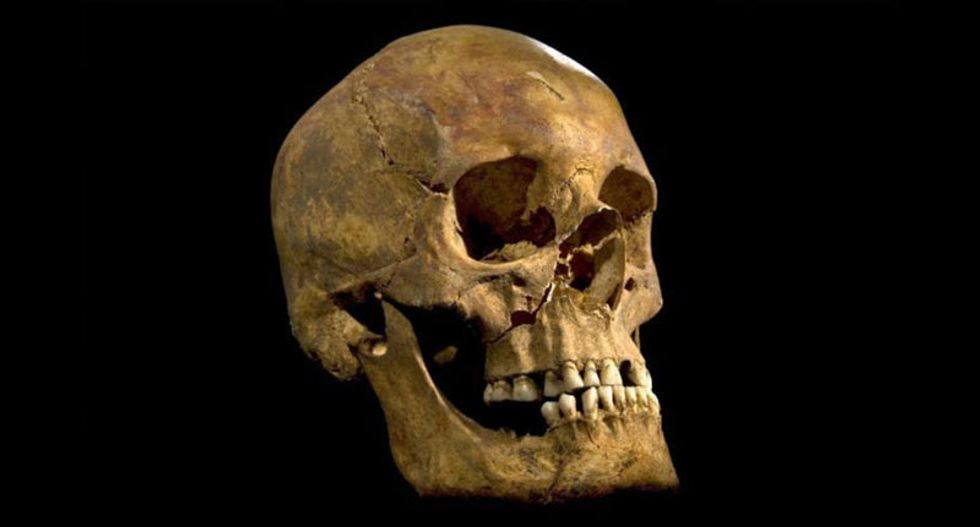 An undated handout picture released on February 4, 2013 from the University of Leicester shows the full skull of the skeleton of king Richard III found at the Grey Friars Church excavation site in Leicester (AFP Photo/-)

British scientists analyzing 500-year-old bones found under a car park say it is now beyond almost any doubt that the remains are of King Richard III, and that studies suggest he had blue eyes and blond hair as a boy.

The remains of Richard -- the last English monarch to die in battle -- were found by archaeologists under a municipal car park in the central English city of Leicester in 2012 and subsequently identified by experts from the university.

In a research paper published in September, the scientists were able to give blow-by-blow details of the King's death at the Battle of Bosworth more than 500 years ago, revealing he was very probably killed by a blow to his bare head.

They found that while the Y-chromosomal markers differ, the mitochondrial genome shows a genetic match between the skeleton and the maternal line relatives.

The team also used genetic markers to determine Richard's hair and eye color and found he was probably blond, especially as a child, and almost certainly had blue eyes.

King said her team were now 99.999 percent sure the remains were Richard and a 500-year-old "missing person's case" could finally be closed.

"Our paper covers all the genetic and genealogical analysis ..and is the first to draw together all the strands of evidence," she said. "Even with our highly conservative analysis, the evidence is overwhelming that these are indeed the remains of King Richard III."