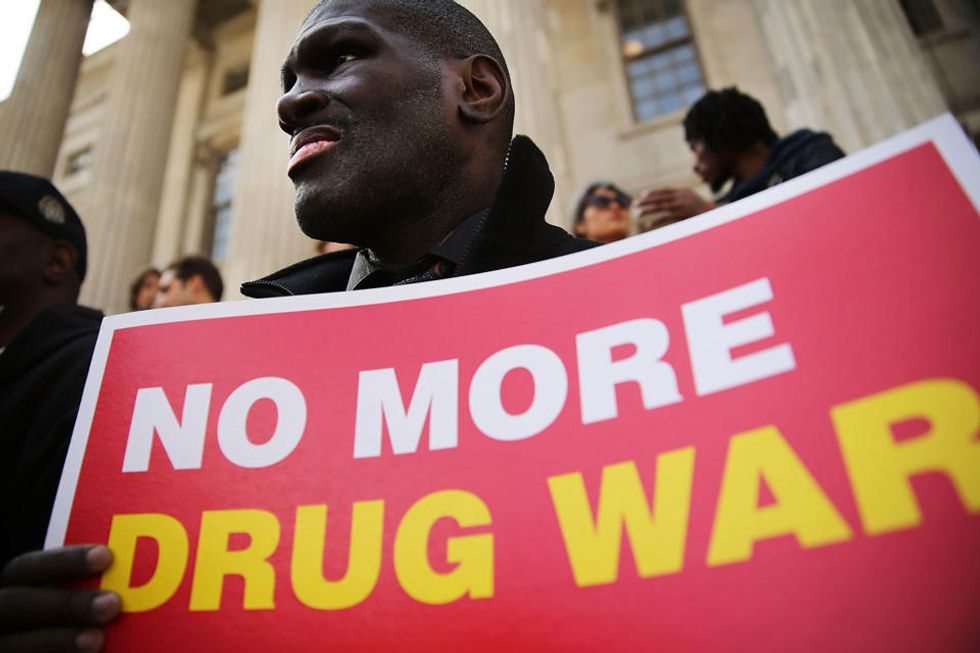 A rally outside Brooklyn borough hall in support of the district attorney's plans to end prosecuting minor marijuana offenses on April 25, 2014 in New York City. Photo by Spencer Platt for Agence France-Presse.

The provision bars federal agents from raiding medical marijuana retailers in the 32 states and the District of Columbia where the practice has been legalized. It also protects hemp farms in Colorado. The amendment was written by two California congressmen, Sam Farr (D-CA) and Dana Rohrabacher (R-CA).

"This is a victory for so many, including scores of our wounded veterans, who have found marijuana to be an important medicine for some of the ailments they suffer, such as PTSD, epilepsy, and MS," Rohrabacher said in a statement.

However, marijuana is still classified as a Schedule I drug on a federal level. The "Cromnibus" bill, as it has been called, contains a separate provision that will also stop Washington D.C. from using taxpayer money to enacting its own legalization of medical marijuana.

President Barack Obama is expected to sign the spending bill into effect this week.

"The war on medical marijuana is over," Drug Policy Alliance lobbyist Bill Piper told the Times. "Now the fight moves on to legalization of all marijuana. This is the strongest signal we have received from Congress [that] the politics have really shifted."