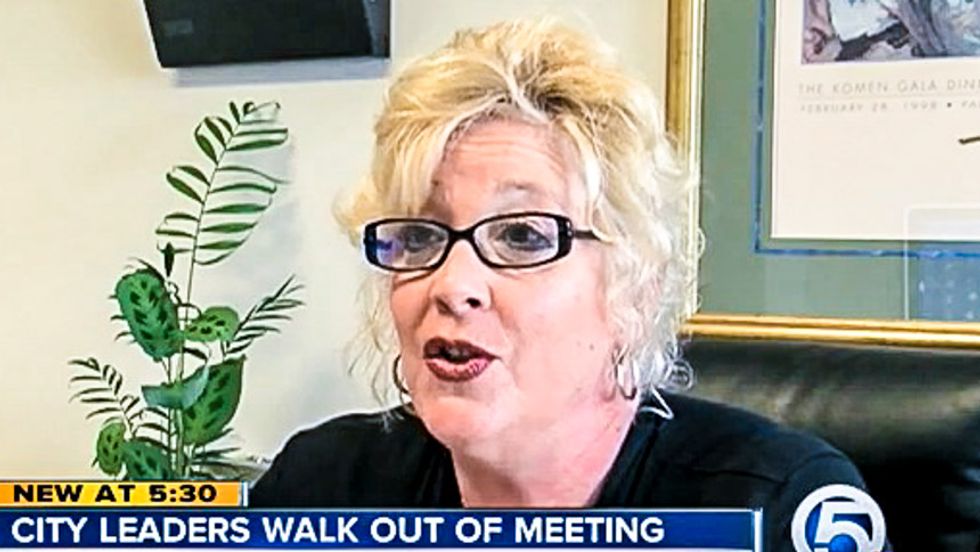 Four of five commissioners and the mayor of Lake Worth, Florida walked out of a commission meeting last week because an atheist was allowed to give the invocation.

Unlike most Lake Worth commission meetings, last Tuesday's gathering did not open with a prayer to Jesus Christ. Instead, an atheist named Preston Smith was allowed to open the meeting with a secular version of the invocation.

But before Smith could begin, Mayor Pam Triolo and four commissioners left the room.

Christopher McVoy, the only commissioner who elected to stay for the invocation, told the Sun Sentinel that he found his colleagues to be "un-American."

McVoy pointed out that commissioners could have violated Florida Sunshine Laws if they coordinated the walkout behind closed doors.

For Mayor Triolo's part, she insisted that she had walked out because she heard a rumor that Smith had posted an offensive tweet.

"I didn't leave because Mr. Smith is an atheist, I left because of his alleged tweet," she explained to WPTV.

Triolo said that she had been told that Smith tweeted an offensive interpretation of scripture earlier in the summer, and she did not want to take the chance that he would repeat the sentiment in front of her.

In fact, Smith's invocation did put Christianity on the same level as less popular practices like Satanism and paganism.

"May the efforts of this council blend the righteousness of Allah with the all-knowing wisdom of Satan," Smith said. "May Zeus, the great God of justice, grant us strength tonight. Jesus might forgive our shortcomings while Buddha enlightens us through His divine affection. We praise you, Krishna, for the sanguine sacrifice that freed us all. After all, if Almighty Thor is with us, who can ever be against us?"

"And so we pray. So what?" he said in conclusion.

But McVoy argued that the commissioners should have stayed in the room regardless of the message.

“If we choose to have an invocation, we have a responsibility to respectfully listen,” he told WPTV, adding that the walkout was "very un-American, and a slap in the face to the principles people fought very hard to make sure we had those rights."

McVoy told the Sun Sentinel that commissioners should be "respectful and tolerant across the board."

“The standard procedure is to bow our heads and listen to the invocation, even if you don’t necessarily agree with all that’s being said," he noted.

Smith called his treatment "an act of pure discrimination."

Watch the video below of Smith's invocation.