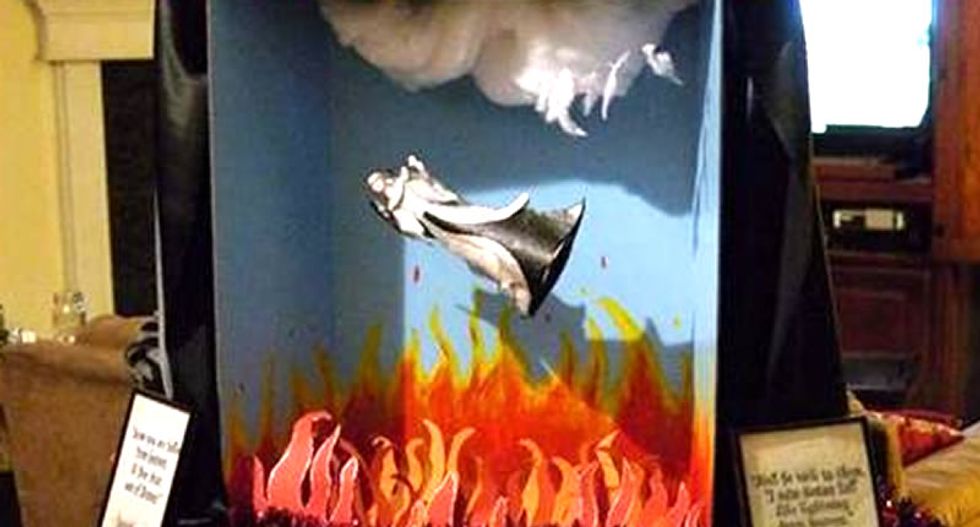 Police have arrested a woman accused of destroying the Satanic Temple's "holiday display" in the Florida Capitol, the Tallahassee Democrat reports.

The controversial display -- in which an angel can be seen descending into a pit of fire -- stood alongside both traditional Christian Nativity scenes and an 8-foot-tall "Festivus pole" made of Pabst Blue Ribbon cans until 11:30 a.m. on Tuesday, when Susan Hemeryck walked up to two Florida Department of Law Enforcement Capitol Police officers and told them that she was "sorry, but I have to take this down."

Hemeryck, who was wearing a "Catholic Warrior" t-shirt at the time, told the Associated Press that "it's just wrong, when you remove baby Jesus two days before Christmas and put Satan in his place? I was there at the right time and the right moment and I needed to take a stand against Satan."

The Florida director of American Atheists, John Porgal, said "the angel's dead. We've been tolerant of their [Nativity] display. We didn't like it, but we tolerated it. You see what they did to our display." He called the damaged display "a sign of what the religious right's idea of tolerance is."

Hemeryck's only regret is that she was unable to do further damage to the display before Capitol Police arrested her on criminal mischief charges.

"I just yanked that little devil off the fishing line," she said. "I should have just done a better job and finished it off for good."

Americans United for the Separation of Church and State issued a statement, saying "[t]his act of mindless vandalism should be condemned by all decent people and all those who support true freedom of religion. It’s important to remember that free speech in an open forum is for all groups, even those whose message some deem controversial or unpopular."

"Our attorneys fought hard for our clients to win the right to display their diorama in the Capitol Rotunda, and we don’t intend to buckle under to this type of senseless destruction."