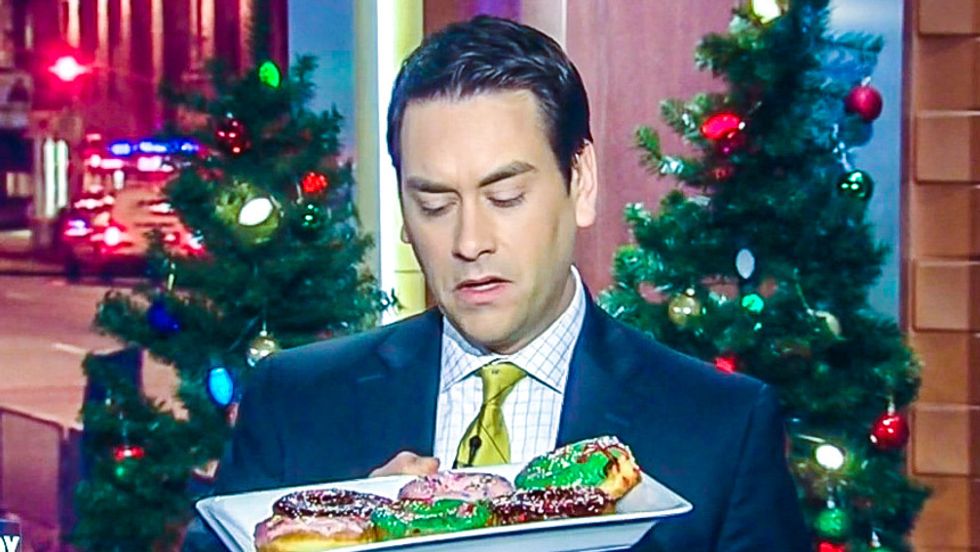 A Fox & Friends segment warned on Tuesday that President Barack Obama's administration was set to enact a ban on doughnut sprinkles, which meant that the government could take control of where you live and work next.

In a report that seemed to have no actual news value other than to rile up readers during the holiday season, Breitbart asserted just days before Christmas that the Food and Drug Administration (FDA) had moved to "ban cake" and "donut 'sprinkles'."

"Although the amount of trans fats Americans consume has declined significantly in recent years, the FDA’s quest to completely eliminate a particular type of trans fat threatens to eliminate the noble 'sprinkle,' used to decorate holiday treats and donuts," the Breitbart report said. "Even a small amount of joy is suspect in the FDA’s brave, new, food-monitored world."

It's true that the FDA took steps in 2013 to phase out the sale of artificial trans fats. And the Center for Disease Control (CDC) estimates that moving forward with a complete ban could prevent as many as 7,000 deaths and 20,000 coronary events each year.

Manufacturers like popcorn maker Redenbacher's have responded by reformulating their foods to remove trace amounts of trans fats.

In fact, the Paulaur Corporation has already removed trans fats from its line of sprinkles by using a non hydrogenated palm oil.

But Fox News host Clayton Morris told viewers on Tuesday that they would have to "say goodbye to your favorite sprinkled doughnut."

"They're getting rid of doughnuts like these," Morris explained while hold a plate of pastries. "Doesn't the FDA have more important things to do than regulate sprinkles?"

"Food police" opponent Jayson Lusk argued that there was no need to ban trans fats because food companies had already reduced the amount that was used because of new labeling laws.

"You know, there's a tendency to look at this policy and say, 'What's the big deal? You know, a ban on sprinkles on donuts, it's just not that big of deal,'" Lusk replied. "But I think the way you want to look at that is to say that, you know, if the government can involve itself in such small minutia decisions of our daily lives as to whether we want to eat sprinkles or not, you know, that's really not much respect for the citizens' choices."

"And if they're willing to ban those small decisions, you know, what kind of respect will they give citizens in the large decisions in lives about where to work or where to live or some of the things that really matter?" he continued.

Morris went on to say that the government would also be banning crackers, frozen pizza, popcorn, coffee creamers and canned frosting.

"If you're making some cookies once a year with your kids on the holidays, that will be banned," Morris remarked, wondering if the government could have some "common sense" and make exceptions for tasty foods.

Lusk said that his children agreed that the policy was "just dumb."

"We should have kids running government," Morris quipped.