No indictment in NYC police chokehold death of Eric Garner 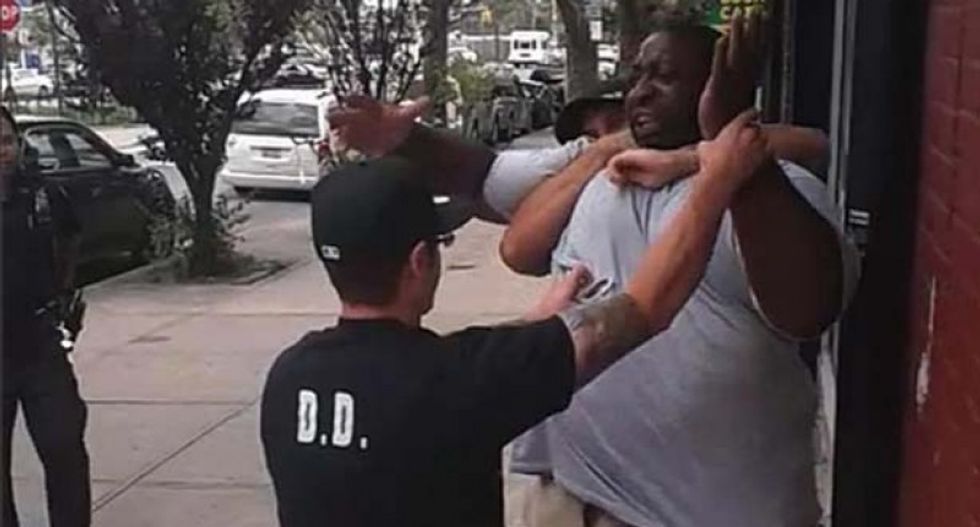 The Staten Island grand jury investigating the death of New York's Eric Garner -- an asthmatic man who died of a heart attack after being held in a police chokehold -- has declined to issue any indictment of Daniel Pantaleo, the officer involved.

The New York Post reported Wednesday afternoon that the officers involved with the incident have been cleared of charges.

"A Richmond County grand jury has completed its investigation into the tragic death of Eric Garner on July 17, 2014, after being taken into police custody for an alleged sale of untaxed cigarettes in the Tompkinsville area of Staten Island, New York. After deliberation on the evidence presented in this matter, the grand jury found that there was no reasonable cause to vote an indictment," Staten Island District Attorney Daniel Donovan said in a statement.

Garner, 47, was accosted by police on July 17 and accused of illegally selling cigarettes. In video of the incident, officers were observed placing Garner in a headlock to subdue him.

While in the headlock, Garner, who had asthma, repeatedly told officers he was unable to breathe. Garner had a heart attack and died in the ambulance on the way to medical help.

The case riled activists and others concerned about police brutality. Many believed that Officer Pantaleo and his colleagues would at least be taken to trial for Garner's death.

Garner's family is suing the New York City government for $75 million over the killing, which a medical examiner's report concluded was a homicide caused by “compression of neck (chokehold), compression of chest and prone positioning during physical restraint by police.”

In a statement, Pantaleo said he never meant to hurt Garner.

"I became a police officer to help people and to protect those who can't protect themselves," Pantaleo said. "It is never my intention to harm anyone and I feel very bad about the death of Mr. Garner. My family and I include him and his family in our prayers and I hope that they will accept my personal condolences for their loss."

Watch video of the arrest of Garner by NYPD officers, embedded below: