Obama takes over for Stephen Colbert: Obamacare now 'half as popular as Grumpy Cat' 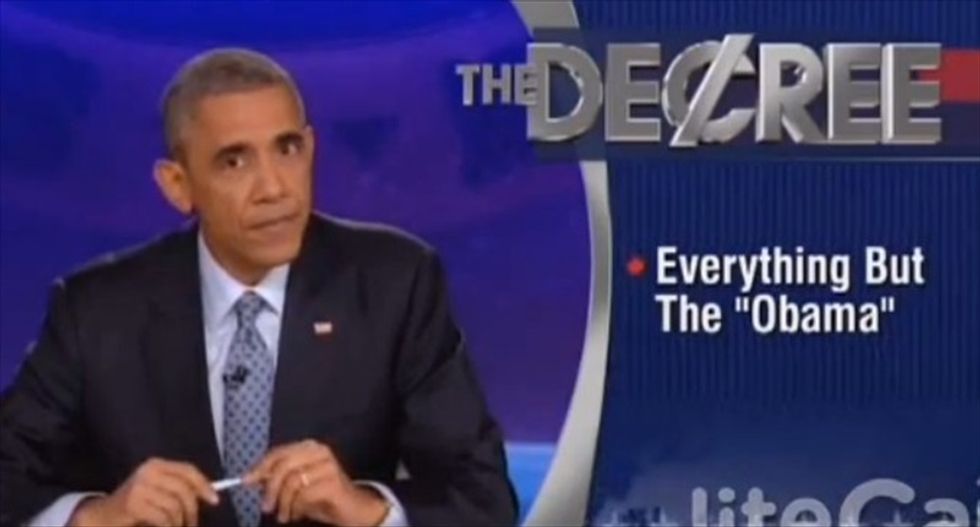 President Barack Obama cracked jokes at the expense of both himself and the Affordable Care Act website on Monday while turning Stephen Colbert's "Word" segment to a more presidential-sounding "Decree."

"Remember the original healthcare.gov?" Obama asked. "I think that's where Disney got the idea for Frozen."

Obama surprised the Colbert Report host just as he was about to begin the monologue.

"I wasn't expecting you here for another three minutes," Colbert said when Obama took the stage.

"Stephen, you've been taking a lot of shots at my job," Obama replied. "I decided I'm gonna go ahead and take a shot at yours."

Obama then did the bit in Colbert's voice, focusing on healthcare law, which is popularly known as "Obamacare."

"There are things that people from both parties like about Obamacare," the president said, as the screen told viewers, "Everything but the 'Obama.'"

The program, Obama said, had enrolled more than 1 million people within the past few weeks ("So, half as popular as [a] Grumpy Cat video"). But, though, Republicans could still pass bills to repeal it once they take control of the Senate on top of the House.

"If I know that guy, he is willing to use it," Obama-as-Colbert said. "And let's face it, even if Republicans managed to repeal it, they'd have to replace it with their own health-care plan. And once they touch it, they own it. Then, if anything goes wrong, suddenly everybody will be complaining about Mitch McConnellcare."

Watch Obama fill in for Colbert, as posted online on Monday, below.