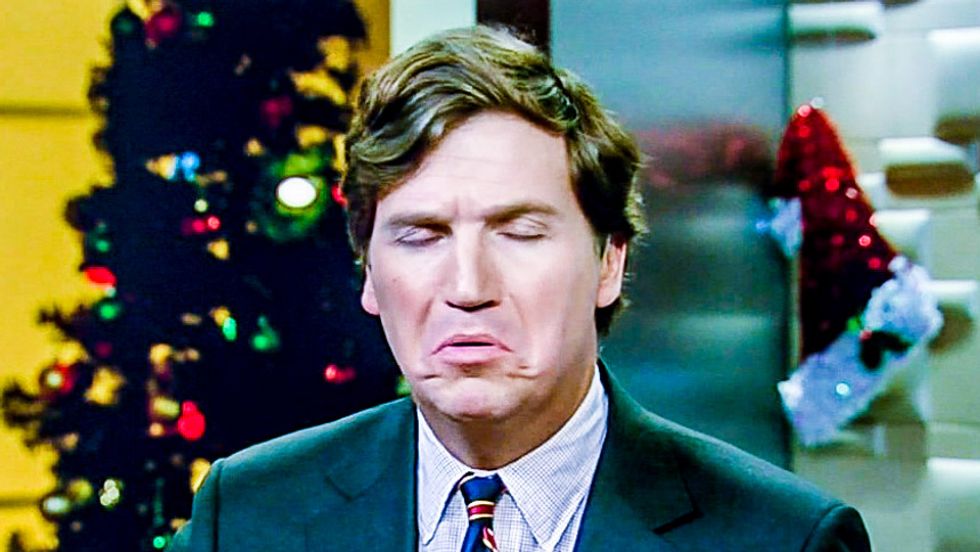 On Saturday, NYPD Officers Wenjian Liu and Rafael Ramos were shot to death while sitting in their patrol car. The suspect eventually turned the gun on himself after police caught up with him at a subway station. Messages posted to his social media accounts indicated that the suspect intended to commit violence against law enforcement officers in retaliation for the deaths of Eric Garner and Michael Brown.

"The murders took place out of the blue in the context of a lot of political agitation," Carlson explained on Sunday. "You don't want to start speculated about why this happened or casting blame unfairly. Again, we know who pulled the trigger, he is ultimately responsible."

"But it's such an emotional thing, it's so wrong, immoral, unfair, that it's almost hard not to point at some of the people who have been whipping race hatred in this country for the past couple of months, and saying they do bear some responsibility for this."

Co-host Ainsley Earhardt pointed out one group of protesters had chanted for police officers to be killed. She did not, however, mention that her own network had deceptively edited the clip to make it look like Sharpton was leading the chant, even though he was in another city.

"Tucker was referencing some of the leaders who have whipped up the protests into a frenzy," co-host Clayton Morris noted, followed by a clips of Sharpton and Holder highlighting inequality in the justice system.

"For [President Obama] to embrace Sharpton," Carlson opined, "Who is just an open bigot and a criminal and a tax cheat, who's been whipping up race hatred in New York for all these decades. For the president of the United States to embrace this guy as a personal friend, an adviser, to show up at the NAN meetings, to have him in the White House again, and again, and again, and again, to endorse his message -- boy, no wonder you've got craziness going on in the streets."

"I can't even believe the president of the United States is endorsing Sharpton. What world is this?"