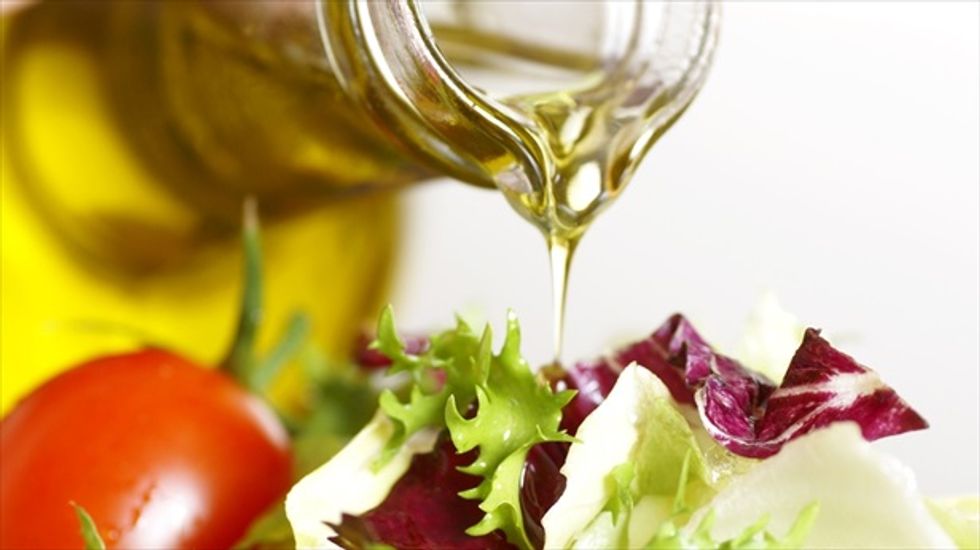 New research from Harvard University suggests it could put years on your life.

But a Mediterranean diet rich in pungent olive oil does not come cheap, and it is just about to get a lot more expensive.

Disastrous olive harvests in much of southern Europe have sent wholesale prices shooting up, meaning consumers around the world are going to have to get used to paying substantially more for a culinary staple prized equally by gourmets and physicians.

Nowhere has the impact of freakish summer weather been felt more painfully than in Tuscany and Umbria, where the subtly aromatic, extra-virgin oils reaped from timeless landscapes provide the industry's global benchmark for quality.

In Spain, which last year accounted for half the world's production of all grades of olive oil, a toxic cocktail of scorching temperatures, drought and bacteria is expected to halve output this year.

In the heartland of poshly-packaged oils that connoisseurs discuss like fine wines, it was a humble fly that wreaked havoc after being handed optimal breeding conditions by the erratic climate.

At Fiesole, in the heart of Tuscany's "Chiantishire" -- so called because of its rich British ex-patriots -- Cesare Buonamici's olive processing facilities should be whirring at full capacity.

Instead, thanks to the olive fly, the sophisticated presses and extraction machines lie dormant for lack of the organically-cultivated fruit that would normally keep them busy until nearly Christmas.

"Our production has been halved," the former engineer says gloomily.

Figures from the International Olive Council suggest wholesale prices of Italian oil have risen 37 percent from 2013, but Buonamici warns the rise for top quality oils like his will be steeper.

"Those are the prices ex-press," he told AFPTV. "For the final consumer the increase is likely to be more than 60 percent."

It is a similar story a little further south, at Tenuta Ronci, a wine and olive estate in northern Lazio.

"This is the only oil we have got left, and it is from last year," says Federico Leszczynski, wistfully nurturing a half-empty bottle of rich-green oil on a misty winter's morning.

"This year we did not produce a single bottle."

Leszczynski is the estate's agronomist. With four hectares under production and some 1,700 trees, it can, in a good year, produce 10,000 50cl bottles of extra-virgin oil for sale at eight euros ($10) a pop.

"People are talking about a 35 percent fall in production across Italy. I'd say that's optimistic. Around here it will be 70-80 percent," he told AFP.

"In our case it will be 100 percent. We took a decision not to produce any oil this year because the amount of usable olives on the trees was so low there was no point in harvesting them."

Olive flies are highly sensitive to climate. Central Italy's combination of cold winters and very hot summers usually keeps them under control but this year's temperatures were more akin to northern Europe.

That and persistent heavy rain provided ideal conditions for the insect's reproductive cycle, in which mature flies pierce the olive skin and lay their eggs, allowing larvae to develop inside the fruit.

If allowed to grow unchecked, the larvae will eat some fruit and, most importantly, enable a mouldy fungus to invade.

A fly-bitten olive is also more likely to drop from the tree earlier and, even when usable, will produce oil with elevated acidity levels and a reduced shelf-life.

"In the worst cases it can be rancid," says Leszczynski. "Even a non-expert will quickly spot the faults."

The extent of the damage suffered this year has triggered a debate about whether producers could have done more, by spraying with insecticides or using fly traps employed by organic producers earlier, to prevent a crisis that is likely to cost the taxpayer dear and put some producers out of business.

Leszczynski says there was little to be done against an enemy operating in optimal conditions.

"Instead of three generations, we had five this year, all as aggressive as each other and all as dangerous to the fruit.

"It would have required so many treatments, it would have been very expensive, bad for the environment and could have ended up with residues left in the final product."

But as with every cloud, there is a silver lining. Producers in Greece and Tunisia, who have enjoyed bumper harvests this year, are looking forward to grabbing a slice of the high-value market which, they believe, has been cornered by Italy for too long.

And record prices for top oils also provide an incentive for farmers elsewhere to start planting: Australia in particular is seen by industry experts as the sleeping giant of the olive world.