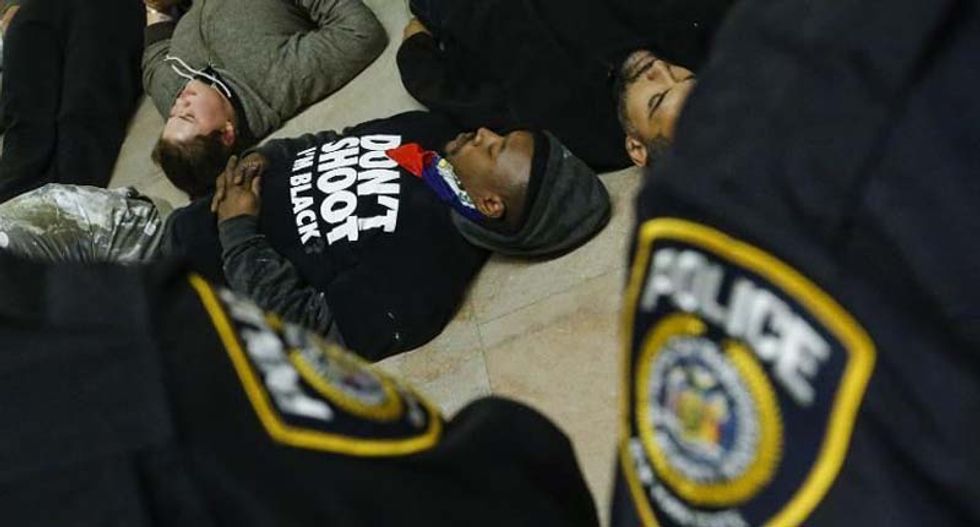 New York Police Department officers watch demonstrators as they lie down on the floor of Grand Central Station in New York on December 6, 2014, as part of a die-in (AFP)

New Yorkers took to the streets Saturday in further protests to denounce a spate of killings of unarmed black men by white police officers as relatives buried a 28-year-old father of one.

Despite heavy rain, dozens of demonstrators gathered in Times Square and later in Union Square, where the crowd huddled under umbrellas and shouted "I can't breathe" egged on by cries of "louder, louder."

"I can't breathe" were the final words gasped repeatedly by Eric Garner, a 43-year-old father of six who died in July after a police chokehold that was caught on amateur video footage.

A coroner's report ruled Garner's death a "homicide" after police held him in a chokehold.

A grand jury's decision on Wednesday not to indict the white officer responsible has now triggered four consecutive nights of protests in New York and other major cities across the United States, mobilizing thousands.

But so far, Saturday's protests were far fewer and more limited than the large turnouts earlier in the week.

Another protest was scheduled later in the evening in Brooklyn.

There were also small rallies held in the US cities of Atlanta, Dallas, Houston and Tampa Bay.

On Friday, demonstrators staged "die-ins," by lying on the ground at Columbia University, Grand Central Station and after pouring into Macy's flagship store in Herald Square and the Apple store on Fifth Avenue.

Another grand jury decision not to prosecute the white officer who shot dead unarmed 18-year-old Michael Brown in Ferguson, Missouri, on August 9 also triggered riots as well as peaceful protests.

Friends and relatives on Saturday attended the funeral of Akai Gurley, who was shot dead when a police officer opened fire in a dark staircase at a Brooklyn apartment building as he walked with his girlfriend late on November 20.

Dozens of mourners paid their respects at the Brown Memorial Baptist Church, where Gurley's gray coffin was covered in a huge spray of red and white flowers.

The 28-year-old, whose mother lived in Florida, had been planning a surprise Thanksgiving trip to introduce her to his young daughter when he was killed.

Activist Kevin Powell, who delivered the eulogy, thanked Mayor Bill de Blasio and the city of New York for paying for the funeral but issued a passionate rallying cry for change and justice.

"This is modern-day lynchings, over and over again. Akai Gurley was simply the latest victim of this," he said, calling for homicide charges to be brought against his killer.

"Let's do everything we can to prevent any more situations like this."

Clinton Miller, a Christian minister, said that clergy and activists would work together to ensure that justice would prevail.

"We ask that you would allow brother Akai's name to live forever in our hearts as we continue to fight for what's right in this country and this world," he said. "We will all work together to pursue justice."

A grand jury is set to weigh charges in the case, the latest in a series that has again brought to the fore the distrust felt by many African Americans toward police.

Gurley's funeral included music from gospel singers, accompanied by a drummer and keyboard player, as well as the reading of a poem by the victim's sobbing young brother, comforted by a relative.

A video montage of his life was shown from when he was a toddler to a proud father carrying his young daughter and pointing to the camera grinning.

Brooklyn District Attorney Ken Thompson said he would present all the evidence for a grand jury to decide whether charges should be brought.

After rookie cop Peter Liang discharged the bullet that struck Gurley, he and partner Shaun Landau did not respond to radio contact for more than 6.5 minutes, the New York Daily News said.

A neighbor instead phoned for the ambulance that rushed Gurley to the hospital, where he was declared dead on arrival.