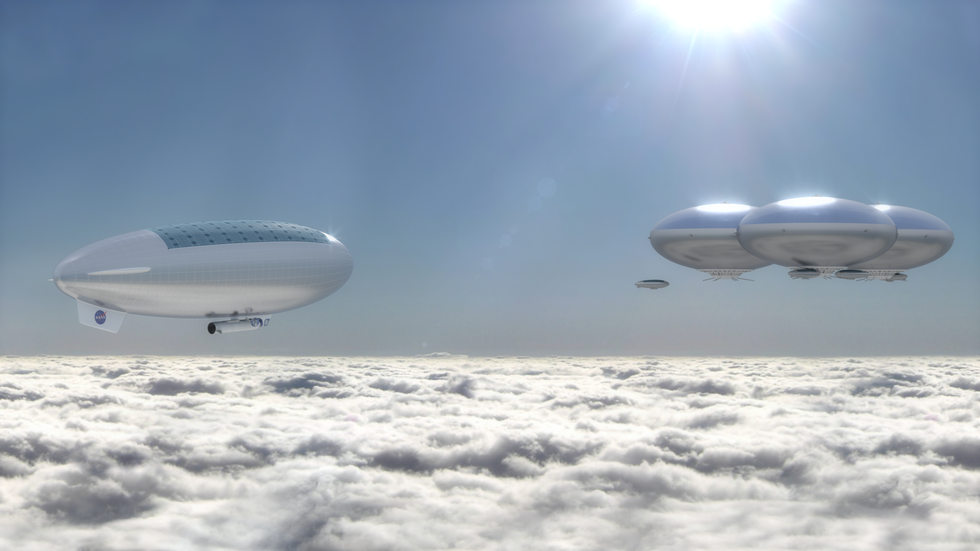 The U.S. space agency NASA revealed plans this week for a manned expedition to the planet Venus.

According to NASA's Systems Analysis and Concepts Directorate (SACD) website, the agency has proposed a 30-day exploration of the atmosphere of Earth's nearest planetary neighbor, Venus.

Venus is a similar size to Earth and appears as one of the brightest objects in our night sky. Because the planet is closer than Earth to the sun, surface temperatures are believed to average around 1,300 degrees Fahrenheit with a dense, poisonous atmosphere that would be utterly toxic to humans.

Sulphuric acid rains from Venus' skies, which are constantly riven by storms. The surface is believed to be pockmarked with active volcanoes that spew lava and keep the planet's surface roiling and desolate.

Venus' upper atmosphere, however, is fairly calm. A lighter-than-air vehicle like a dirigible-style airship would give an exploratory team a safe vantage point from which to study the planet's atmosphere and to observe what can be seen of the surface.

Named HAVOC (High Altitude Venus Operational Concept), the Venus exploratory mission would house two astronauts in a month-long mission to explore Venus' climate and atmosphere and to gather atmospheric samples to bring back to Earth.

Upon arrival, the exploratory capsule would unload and construct an airship that would hover more than 30 miles (50 kilometers) above Venus' surface. The astronauts would collect samples of the atmosphere and drop probes to down to the planet.

NASA points out that the trip would take less time than the journey to Mars.

"The mission requires less time to complete than a crewed Mars mission, and the environment at 50 km is relatively benign, with similar pressure, density, gravity, and radiation protection to the surface of Earth," reads the SACD website.