Stephen Colbert asks 'Emperor' Obama: 'I'm a Christian -- would you like to throw me to the lions?' 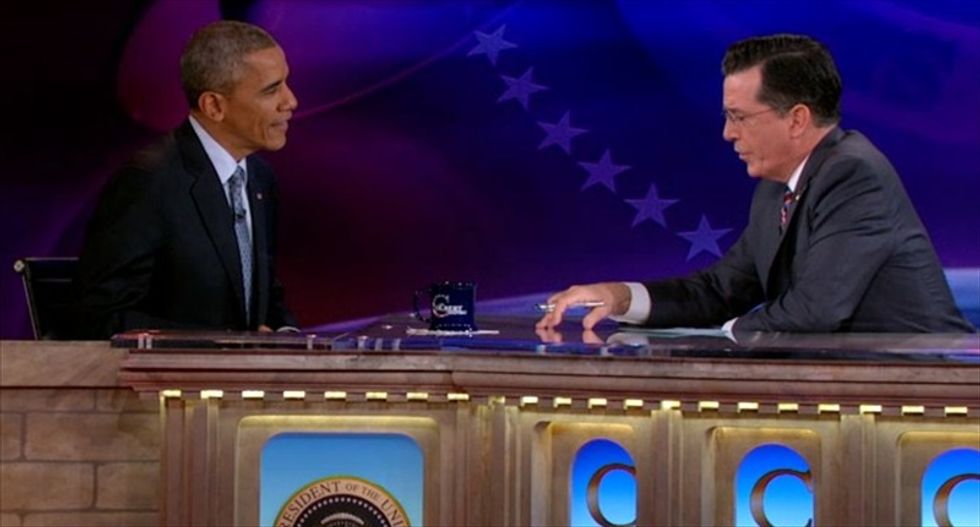 Stephen Colbert insisted to President Barack Obama on Monday that his presidential reach had extended too far with his recent executive order concerning immigration reform.

"You realize you're an emperor now," Colbert told Obama. "It has been declared; you are Barackus Maximus the First. I'm a Christian -- would you like to throw me to the lions? I would be delicious."

Obama countered that, rather than "burn the Constitution," his order -- which could make up to 5 million undocumented immigrants eligible for work permits -- fell in line with orders given by Republican presidents like Ronald Reagan, George H.W. Bush and George W. Bush.

Colbert then pushed back, saying that those orders came in response to previously-passed laws. Obama countered that those laws were weakened after lawmakers took out provisions each president wanted.

"But laws are like jazz -- it's the parts you don't pass," Colbert said.

"We can't deport 11 million folks who are here, the vast majority of whom are good people who are just trying to get ahead and make sure their families get ahead," Obama replied, after taking a second to Colbert's switch in metaphors. "Instead of devoting a whole lot of resources on separating families -- grabbing some mom who's working in a hotel or some dad who's working in a kitchen somewhere -- let's focus on deporting felons."

Watch the interview, as posted online by Comedy Central, below.