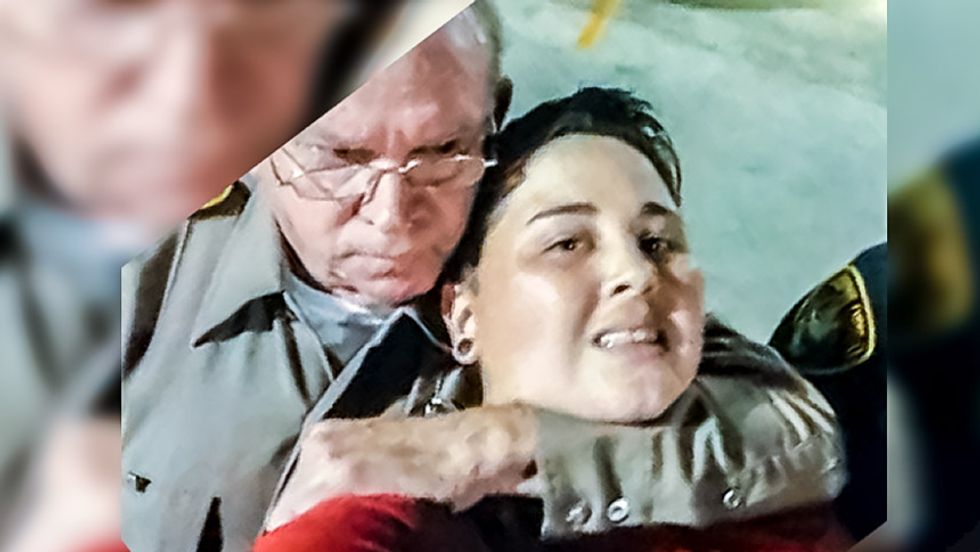 An off-duty Texas law enforcement officer who was caught on video using a chokehold while trying to get information from a witness has been allowed to resign instead of being fired.

Espinosa explained to the Corpus Christi Caller-Times that Lockhart was demanding to see her ID because she believed that she may have been involved in a fight at a restaurant on Aug. 16.

Video recorded by Espinosa shows her insisting that she did not have to produce ID, and saying that she was stepping back because she felt threatened by Lockhart. At that point, Lockhart begins to place her in handcuffs, while the video catches Witherspoon putting her in a chokehold.

In a statement on Wednesday, Nueces County Attorney's Office said that Witherspoon had decided to resign.

“The termination is a result of his involvement and actions at an incident that took place on August 16, 2014, as well as other employment issues,” the statement said. “However, during the termination process, Mr. Witherspoon asked for and was allowed to resign in lieu of (termination).”

In another chokehold case on Wednesday, a Staten Island grand jury had decided not to indict New York City Police Officer Daniel Pantaleo for the July 17 death of Eric Garner, who died as a result of compression of the neck. Pantaleo has been suspended from the police force without pay, but has not been fired.

The Corpus Christi Police Department defended Lockhart's detention of Espinosa in a statement on Monday, saying that she had been interfering with the officer's public duties.

"The detention was based on the incident (that she had been involved in the fight, which she admitted), and not due to the fact that Ms. Espinosa was videotaping the officers," the statement asserted.

For her part, Espinosa said that she was not involved in the fight, and that she was only in the restaurant parking lot because the officer had not allowed her to leave.

KIII reported that Lockhart had been disciplined after dashcam video showed that he asked Espinosa to delete the chokehold video.

"I was not doing anything wrong," she told the Corpus Christi Caller-Times. "And it's my right to refuse [to provide ID] if I'm not being charged."

Espinosa was never charged with a crime. She is now considering a civil rights lawsuit against the city.