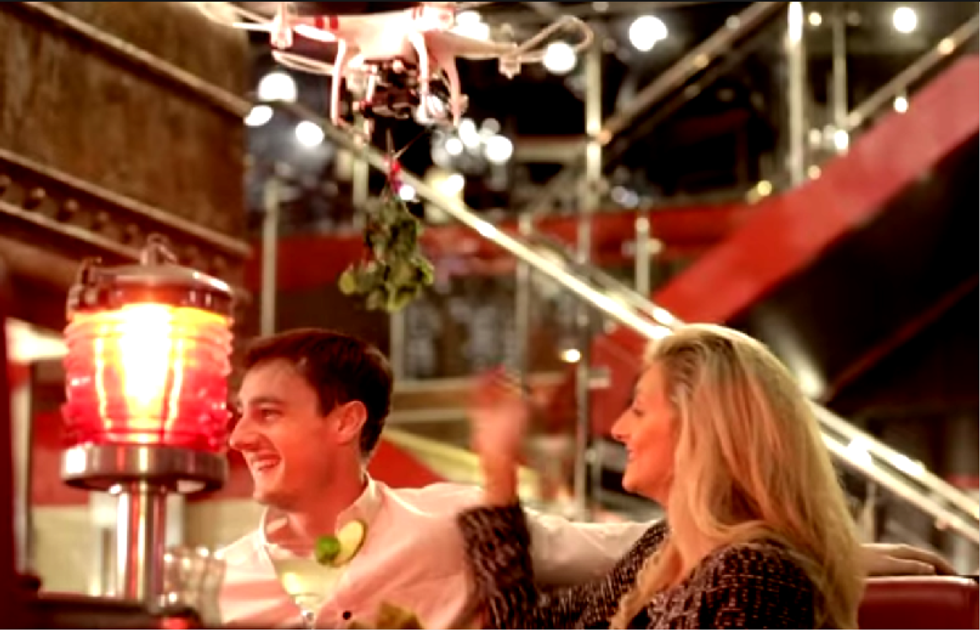 A photographer was struck in the face by a mistletoe-carrying drone at a TGI Friday's last Thursday, severing the tip of her nose.

According to the Brooklyn Daily, the accident took place at the Sheepshead Bay location of the popular chain restaurant, which has been promoting the "Mobile Mistletoe" drones as a holiday attraction.

During what TGI Friday's is calling "#Togethermas," the remote-controlled drones hover around restaurant locations, flying over couples to prompt them to kiss, then recording the resulting interactions with an on-board camera.

The Daily's photographer Georgine Benvenuto was watching the drone land on a reporter's hand when it veered out of control and struck her in the face.

“It literally chipped off a tip of my nose,” Benvenuto said to reporter Vanessa Ogle as she attempted to stanch the flow of blood with a wad of tissues. “It took off part of my nose and cut me here, right under my chin.”

The photographer said that she is thankful that she didn't lose an eye.

“Thank god it didn’t go anywhere under my eye," she said. "That is my livelihood.”

Drone operator David Quiones blamed the woman upon whose hand he was attempting to land the drone for the accident, saying that she flinched, sending the multi-bladed flying machine crashing into Benvenuto.

Benvenuto was skeptical. "He's the one controlling it," she said. "He needs to be more careful."

TGI Friday's spokeswoman Frances Karkosak said that this is the first accident involving Mobile Mistletoe drones. Customers and restaurant employees are not in any danger of similar accidents in the future, she said.

"We do not let consumers touch" the drones, she said, not the four-bladed small drones like the one that struck Benvenuto or the larger, six-bladed models being used at some restaurant locations.

Quiones said that even if people do get hurt during the Mobile Mistletoe promotion, it won't stop customers from coming and playing up to the flying cameras.

“If people get hurt, they’re going to come regardless. People get hurt in airplanes, they still fly,” Quiones told the Daily. “There is a risk involved — anything flying, there is risk.”

Watch a promotional video about mistletoe drones from TGIFridays UK: