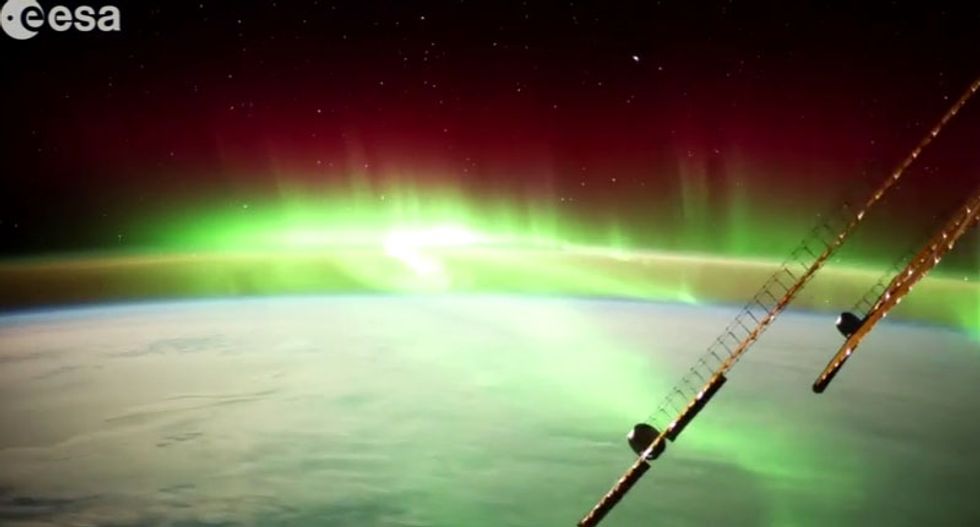 An image of Earth taken from the International Space Station (Screenshot)

If you're a fan of epic ultra high definition time-lapse videos from space — and really who isn't — then you'll be happy to know that Christmas arrived early and Hannukah is right on time. The European Space Agency has stiched together more than five months of astronaut Alexander Gerst's time-lapse photography from the International Space Station (ISS) and made it into a six-minute video.

Gerst spent 166 days in orbit starting in late May on the ISS as one of five flight engineers, all part of the European Space Agency's aptly named mission, Blue Dot. Luckily for us mere mortals, he also had an excellent photographic eye and captured some pretty spectacular views as the ISS hurtled around the planet at 17,200 mph, making more than 15 laps each day.

Lightning from space looks like daubs of electric paint atop of clouds. Large-scale weather patterns including spinning areas of low pressure look just like they do on weather maps. The aurora takes on the appearance of a shimmering green curtain draped around the high latitudes of Earth. And day and night on the horizon of Gerst and his fellow astronaut's view, the crystaline strip of the atmosphere — the one we're filling with greenhouse gases — is clearly visible, separating those of us back on planet Earth from the rest of the universe.

But lest you think it's all eye candy and fodder for philosophical musings, there are also a few hidden insights into how the various apparati that ensure the ISS can sustain the astronauts that call it home. Solar panels rotate to catch the most sun and keep all systems up and running. At the 1:35 mark, a robotic arm extends to pluck a Cygnus spacecraft — one of the commercial spacecraft that help supply the ISS — out of, well, space. After collecting its payload, the same arm releases it on its homeward journey at the 4:50 mark. It truly looks like science fiction.

So go ahead, ratchet the video up to ultra high definition and enjoy each one of the 12,500 images it took to create it. And let it not go unnoted that the European Space Agency also found some pretty futuristic background music for the video. Hope you're taking notes, NASA.