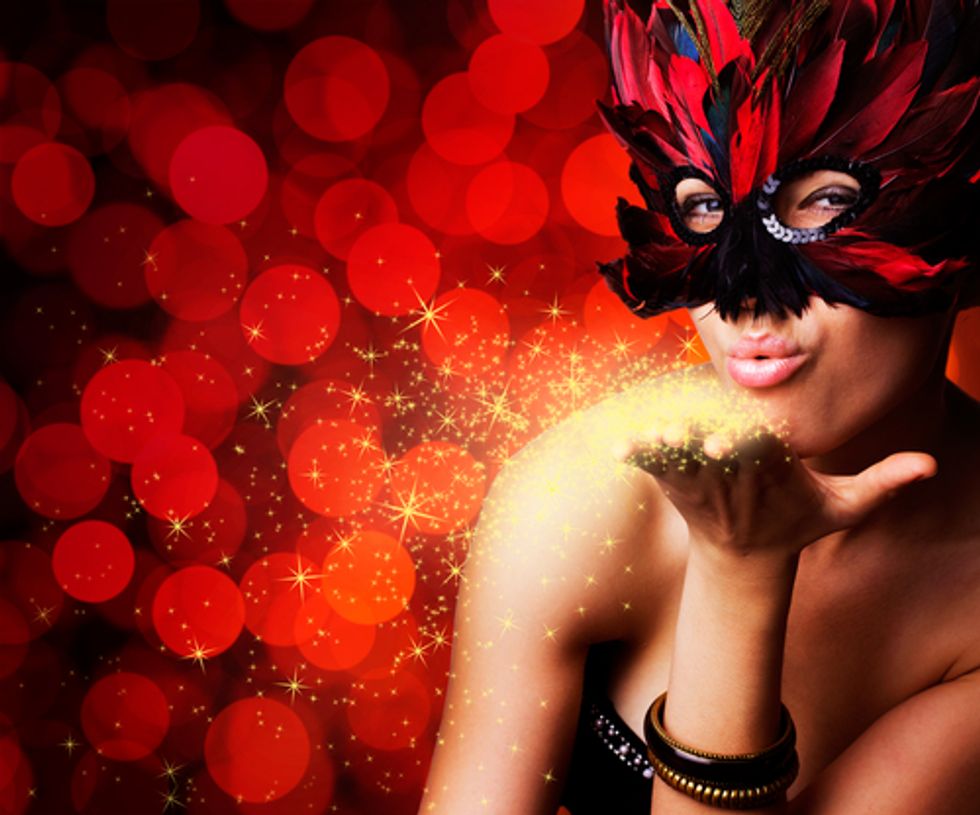 Before I take off for the rest of the week, I want to flag this amazing post at Feministing written by Katherine Cross that articulates better than anything I've ever read why it is so irritating to women to have men constantly sharing how our appearance makes their dicks feel, even if the determination is that we adorn ourselves in a dick-pleasing manner. Often, women react to this constant judgment by saying, "It's not about you," but the counterpoint is always that, in some cases, women are clearly trying to look sexy, and thus it must be because it is a performance solely for the benefit of men. But, as Cross says, it's just not that simple:

Our clothing choices and all other aspects of adornment — tattoos, piercings, etc. — are all socially mediated, of course. No desire exists in a vacuum. We all seek a place in the grand constellation of social groups and we all, consciously or not, try to “fit in” somewhere. Appearance is a language without words that signals much to the world, in that regard. That language begins from us, however, even if the grammar is often beyond our control. We signal in the symbolic languages we know because of a variety of personally-driven desires. On occasion, this may involve wanting to look nice for one man in particular — say, on a date — but the popular patriarchal idea that women adorn ourselves for men as a matter of course is about as solipsistic as it gets. Women cannot be seen as agents, just celestial bodies orbiting male suns.

“We are born,” author Siri Hustvedt writes, “with the ability to imitate the expressions of others, but we also become creatures of our culture with its countless images of what is chic and beautiful.” We seek to touch the stars of fashion because we want to express our allegiance to archetypes and ideas in our culture — some of us may want to look “classy,” how ever our culture or subculture defines that, and the judgements of others play a role in triangulating the pathways of our desire. The desire may originate from within us, or it may not (perhaps one wishes to be classy for instrumental reasons — i.e. to get a job), but we measure our success by the opinions of others, the mirror of recognition that reaffirms or challenges the self we are constructing. For people of all genders, we may present ourselves in a given way for others in order to feel more like ourselves. Our sense of identity is reinforced collectively.

Reading this, what I realized was that what makes women prickly is not being complimented, by men or women. It's the form that many of these "compliments" take. The reductive "compliments" that assume that a woman's presentation is strictly about the men around her and making them happy is what is irritating. Compliments that say, oh you have style or you really know what you're doing? Everyone---male, female, any gender you please---loves those compliments. But compliments that are clearly nothing but variations on "I would allow you to touch my dick" irritate. They remove agency from the act of dressing. Even when women want to look sexy, they do it because they want to feel sexy, not as a charitable act for the male eyes around them.

I get that this is a subtle distinction and thus easy for men who want to control and harass women to pick at in comment sections, but in the real world, the difference is generally easy to grasp. Admiring glances, thoughtful compliments, or even raunchy suggestions in a consensual relationship are all validating in way that Cross spells out: They make you feel like you went for a look and achieved it. Having dudes yell shit at you on the sidewalk, however, isn't a validation but an attempt to assert ownership, and it feels yucky. As much as online misogynists deliberately try to confuse the issue, the reality is that human interaction is subtle and complex and we can tell intention from the way you say things and who you say them to. Playing stupid to deny that is only done to justify and rationalize harassment.

Of course, one quick way to tell the difference between a man who is participating consensually in a mutual admiration society with women and a man who thinks women exist to please him is how they react when women don't look how they want. Cross addresses this, too:

We can even see this in GamerGater propaganda (remember this?). That movement’s ongoing obsession with dyed hair is premised on a similar belief that all women who disagree with them and color their hair brightly — green, or blue, or pink, for instance — are doing so because they wish to thumb their nose at men specifically, or that they are doing it as an entirely self-conscious, petulant political statement; again, for men’s benefit. One male Gater even described this phenomenon as “having political statements shoved at me just by taking a cursory glance at a person.” To them, women with dyed hair are doing it just to irritate them.

While women with dyed hair or tattoos encounter this kind of solipsism more than other women, I think many women run into some form of this on a regular basis: Men making pronouncements about how your appearance is displeasing that assume that the sole standard for how to measure a woman's appearance is not how she feels, not what kind of message she wants to send, or even what the kind of men she finds attractive would like. It's only about how he feels. If he hates tattoos, then tattoos are "ugly". If he hates dyed hair, then that is "objectively" ugly and she must be doing it, as Cross says, to offend him. He assumes that her appearance isn't just about men generally, but about him in particular. He feels his opinion stands in for "men's" opinion generally and therefore should be like the word of god to the woman he is addressing.

There's the compliment version of this, as well, which Cross addresses with the men who like to go on and on about how they prefer women without make-up, which women are meant to feel is "permission" to wipe our faces clean, but is, in fact, an attempt to control our appearance by suggesting that the only desire we should have is to please "men", defined as what this one random dude thinks. Very irritating.

But I wanted to address why, in particular, dyed hair seems to set off geeky misogynists of the Gamergate sort. And apparently it really pisses them off. Here's the meme that Cross was addressing: 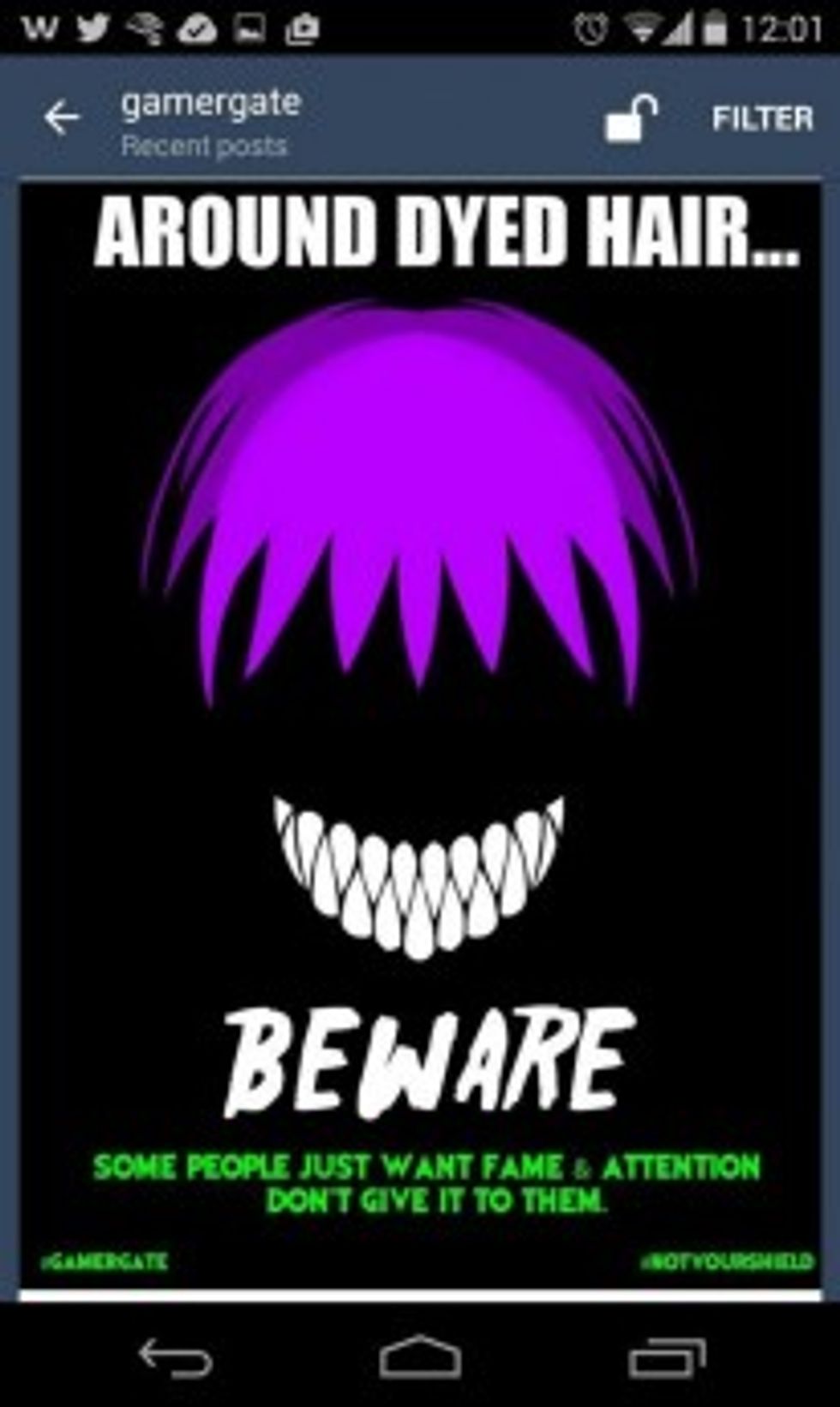 This meme directly addresses a surprisingly common jab at women, based on appearance, from misogynists generally, but for some reason is particularly salient to misogynist geeks: That they want "attention". Apparently, wanting people to validate and appreciate you is at the top of their list of the worst things a woman could ever do, right alongside with having sex without Eron Gjoni giving you permission. You see this searing hatred for women who attract the eye and positive, validating attention with the bizarre haterade aimed at cosplayers, as well. Sure, cosplay haters try to come up with some lofty reasons for their haterade, but it always comes back to the same thing: They don't like it when cosplayers, who are predominantly women, get positive attention. Watching women get positive attention, particularly if they openly want positive attention, sets them off like few other things can.

It's clear that the expectation here is that women should, while being attractive for the purposes of sexual release for men, also be quiet and sidelined. The urge here isn't all that different from that of men who use religion as justification to demand that women dress "modestly"---your sexuality is seen as a thing to be owned and enjoyed by men, but not for yourself to use for ends like getting attention or feeling good about yourself. This is why bright colors are often seen as just as immodest as, say, short skirts. Anything that draws the eye draws condemnation.

It all baffles me. Obviously, someone who sucks up all the oxygen in the room is a problem, but most of the people who get accused of being "attention whores" are people who enjoy attention but also brighten everyone else's day while they get it. Women cosplaying, women looking good and walking down the street, women with brightly colored hair: They make the world a slightly more fun place, and yet so many men try to squelch this behavior by harassing them (and pretending it's a compliment), sneering at them and, always, calling them "attention whores". In fact, getting any attention at all is enough to get you labeled "attention whore", I've noticed. Women who have even low levels of desire for attention will get accused of this. You get the feeling that the only right way to be is invisible.

So this is my wish for 2015: For people to seriously fight back against this entire "attention whore" thing. Wanting attention and validation is a normal human desire and, as long as you're having fun and not hurting anyone, getting and giving attention is a good thing. That someone wants attention does not justify harassing them---it's implicit and understood that people want positive attention, not assholish behavior. I want more people asking angry misogynists how, exactly, they are being hurt if people look at the pretty girl in a comic book costume. Or how, exactly, some woman getting attention is stealing from them. I see a lot of people talk about self-expression through clothes and hair in terms of expressing yourself to deflect the "attention whore" accusation, but it's time to admit that getting positive attention for your self-expression is part of the process. It's time to ask hard questions about why, exactly, we're made uncomfortable when women want positive attention.

Happy holidays and wear all the sparkle you want, everyone!