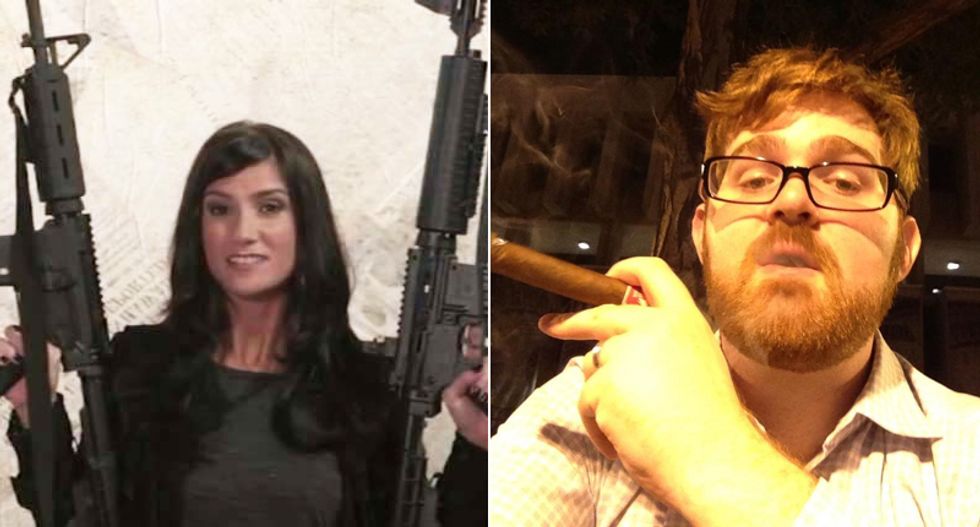 Two of the most reprehensible people on the Internet -- and that is not an exaggeration -- are duking it out; revealing Breitbart family secrets, opening up old wounds, and saying things neither of them  will ever regret saying because they are are the kind of people who will say anything for a website click and a buck because they are amoral soulless monsters.

Dana Loesch, --whom you may remember from her start turn on CNN saying she would like to pee on dead Muslims, because she is both measured in her responses and classy at the same time -- has had it up to here with Chuck C. Johnson, 'journalist,' abortion-watcher, rape victim re-victimizer, and claimer of having 'The Autism,' which excuses all of his crimes against ethics in journalism.

What should have been a private tête–à–tête between these two obvious soulmates who both previously worked at Andrew Breitbart's Inland of Broken Toys That Nobody Wanted In The First Place, seems to have its genesis in Chuck outing Bible-n-gun toting  American mom Holly Fisher.

According to our intrepid Chuck, Fisher seductively slipped the American flag  from around her shoulders to engage in some All-American adultery-banging with a Tea Party dude while her soldier husband was keeping America free so that Chuck Johnson could 1st Amendment-report on her aforementioned adultery.

Nobody ever said that freedom of speech and the press wouldn't get ugly from time to time.

This enraged conservatives who, you may remember, showed considerable restraint when Bill Clinton got a blow job that one time.

It was in all the papers, you should look it up.

Loesch took offense because she is BFF's with her fellow gun/flag/Bible-toting sister in arms and unfollowed Johnson on Twitter -- which is, like, 9/11 or Benghazi, or something maybe even worse.

Johnson rightfully took offense at the offensive unfollow and promised journalism jihad on Loesch on the Twitter:

As my grandmother used to say: "shit just got real."

Loesch took to the blog for her radio show -- remember radio? -- to say that all of Johnson's accusations  can be explained as simple misunderstandings --  much like Fisher boinking the hunka-hunka Tea Party man-meat -- and that Johnson is a big poopy head and she wouldn't piss on him if he was on fire and a Muslim.

Also, too, Loesch said it is a total coincidence that she unfollowed Chuck that day.  I know, weird, right? But then those things happen. 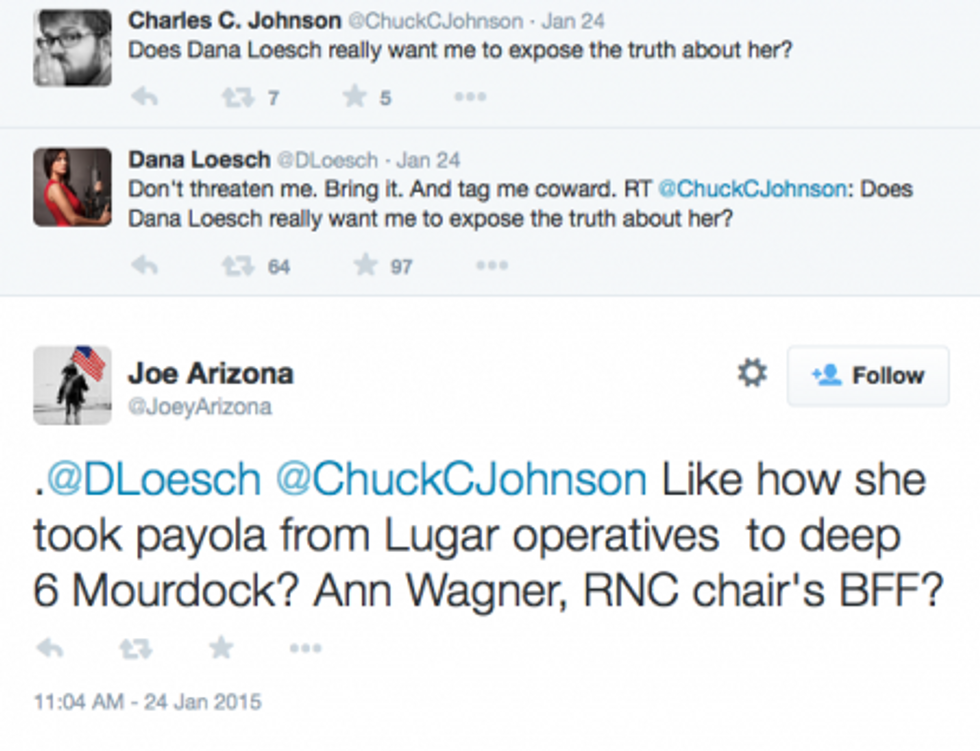 I’m happy to enter this post and all email correspondence between myself, associates of Andrew Breitbart, and Dana Loesch as sworn testimony so that Loesch can sue me and we can call witnesses. Given that she sued the widow of Andrew Breitbart (see below) I don’t see why she won’t, and I welcome the opportunity to reveal all relevant confidential documentation. I’m limited legally in what I can reveal.  I’ll give you the news then I’ll give you my analysis.

And now d-list actor Adam Baldwin and teabagger/ultra-con/bigot f-list actor Nick Searcy have been drawn into the family squabble and for the first time in many years, I believe in God.