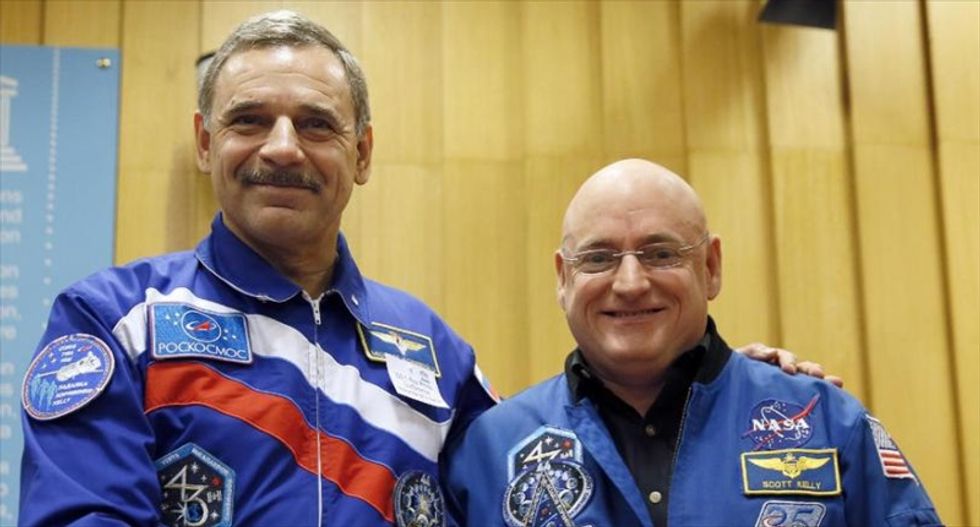 Two men are about to spend a year at the orbiting International Space Station, in an experiment that will test the limits of the human body and mind.

American astronaut Scott Kelly and Russian cosmonaut Mikhail Kornienko will launch aboard a Russian Soyuz spacecraft on March 27, and they will stay until March 2016.

The trip marks the longest amount of time that two people will live continuously at the ISS, though a handful of Russian cosmonauts spent a year to 14 months at the Russian space station Mir in the 1990s.

Both Kelly and Kornienko are space veterans who have flown multiple missions to orbit, and each has already spent about six months at the space station.

Kelly said some things will be different this time. He will keep a personal journal, and also plans to do his first spacewalk, as part of ongoing efforts to reconfigure and fix up the space station.

But he said he is concerned about the impacts of radiation and living in zero gravity, particularly in terms of compromised immunity and bone and vision loss.

"I'm hopeful that there is not a big cliff out there with regards to our ability to stay and live and work in space for longer periods of time," he said.

"But we are not going to know that until we have actually done it," he added.

The physical effects of a year in space will be closely monitored by doctors on the ground in an unprecedented study of how the human body withstands the rigors of spaceflight before humans plan to journey to Mars.

Kelly's twin brother Mark is part of the experiment and will undergo regular health checks on Earth so doctors can compare the brothers' vital signs.

Genomic testing is being done too for the first time to see if and how spaceflight changes a person's bodily makeup, said Julie Robinson, International Space Station program scientist.

"We have never done something like the twin study where we sequence the genes of both Scott and Mark and we look at the gene expressions and different markers," she told reporters.

The Russian space agency has shared its data from the year-plus Mir missions in the 1990s, but science has advanced since then, she said.

"At the time, the standard was to be making fairly observational measurements about how long they could exercise, how strong they were when they returned to Earth," she said.

"Our Russian colleagues mostly thought that running on a treadmill was the most important thing to do and it is certainly important for maintaining your cardiovascular fitness," she added.

"But what we found on ISS was that intensive resistance exercise is what really helps people protect bone."

Among the things he will miss on Earth, Kelly mentioned his family and the weather.

Kornienko, who said he would bring a picture of his late parents and his family with him to space, agreed.

"As our song says, 'We dream of the grass by our home,'" he said through a translator.

"And it's true. That's what we dream of. Also the water that doesn't fly around in bubbles but water you can actually swim in."

Gennady Padalka of Roscosmos will fly to space with the two men, serve as commander at the ISS and return after six months.

"This will be my fifth flight, almost 900 days in space, and I am very interested how this will affect my own body," he said, also through a translator.

Padalka said he plans to take photos of oil spills, fires, glaciers and areas that are being altered by human impact.

For the two men who stay on for a year, the psychological challenges may be harder than the physical ones.

"By being far away from Earth, being sort of cramped and having few people to interact with, I think that will be the most difficult for these guys to withstand," Padalka said.

Kelly, too admitted that he felt ready to go home about four months into his last six-month trip.

But he said he gets along well with his Russian colleagues.

"I couldn't ask for a better two professional cosmonauts to fly with. We are all great friends," he said.

"I will be very sad when Gennady leaves. But he said he will be in Baikonur (Kazakhstan) when we land six months after he departs," Kelly added.

"And he says he is going to carry Misha and I out of the Soyuz like we are little babies."