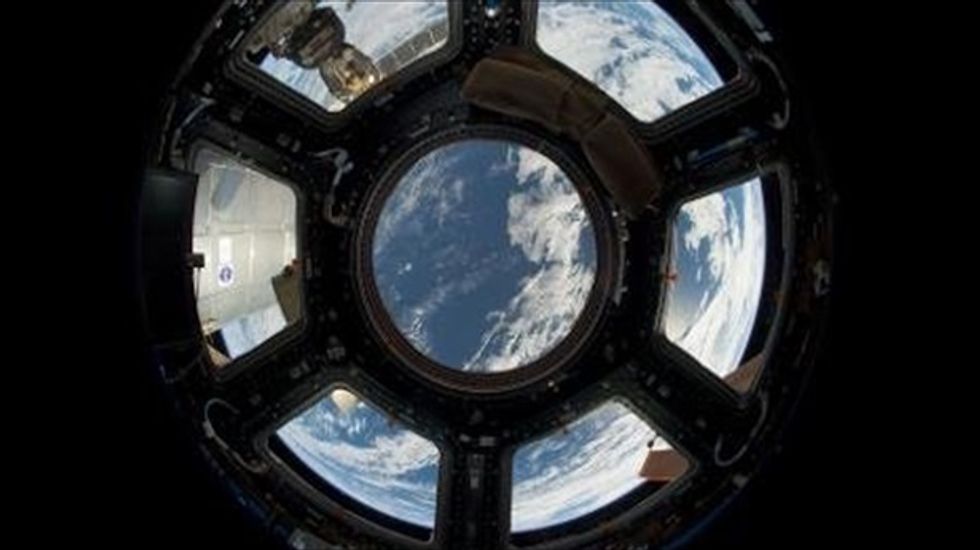 This NASA photo obtained June 18, 2013 shows a view of Earth as seen from the Cupola on the Earth-facing side of the International Space Station (AFP)

Astronauts at the International Space Station rushed to take shelter Wednesday after an alert sounded that could indicate a dangerous ammonia leak, but may have been a false alarm, the US space agency said.

The six-member crew donned emergency masks and hurried to the Russian side of the orbiting lab after the alert at around 4 am (0900 GMT), closing the hatch to the US side behind them.

While the Russian space agency told news outlets in Moscow that the cause was a toxic ammonia leak, NASA said there was no data to confirm that, and stressed that the crew was safe.

Ammonia is used in the cooling and heating systems at the orbiting outpost.

NASA suspects that a "false indication" is at the root of the problem said Jim Kelly of mission control in Houston, speaking to US astronaut and space station commander Barry Wilmore, in an exchange broadcast on NASA television.

"Big picture perspective, we are still trying to figure out exactly what happened. We are not entirely convinced that this is an ammonia leak," Kelly said.

A sensor problem or a computer relay issue could have led to the alarm, he added.

"It is becoming a stronger case that this is a false indication, which is great news," Kelly said.

The six astronauts taking shelter in the Russian segment have enough food for at least a week, NASA said.

The problem became apparent when flight controllers in Houston "saw an increase in pressure in the station's water loop for thermal control system B then later saw a cabin pressure increase that could be indicative of an ammonia leak in the worst case scenario," NASA said on its website.

Russia's space agency blamed the evacuation on a leak of a "toxic substance was emitted from a cooling system into the station's atmosphere" in the US segment of the station, the agency said in a statement.

A representative of the Russian mission control center told Russian news agencies that the substance was ammonia.

The International Space Station is a rare area of US-Russian cooperation that has not been hit by the crisis in Ukraine, which has prompted Washington to impose sanctions on Moscow.

In total 16 countries work on the ISS, whose cost is mainly shouldered by the United States.

Since NASA phased out the space shuttle system in 2011, it depends entirely on Russia to send its astronauts to the ISS.

The Expedition 42 crew had been awake for about two hours before the alarm sounded, and was at work unloading the SpaceX Dragon cargo carrier which arrived days ago with more than 2.5 tons of supplies and science experiments.

Two women and four men are on board the space station, making up a crew that hails from Russia, the United States and Italy.