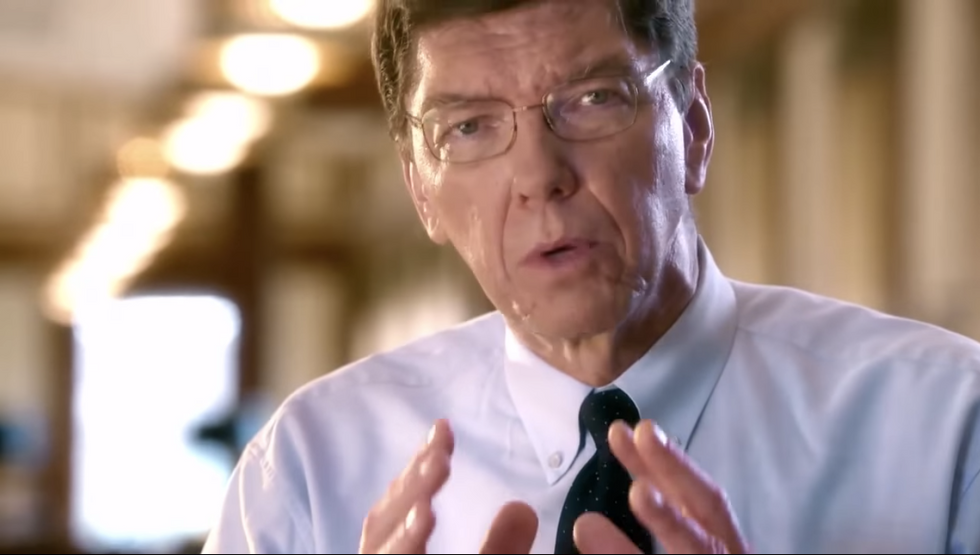 The group American Atheists is blasting an Alabama university official for sending out a fear-mongering anti-atheist video to students this week.

American Atheists reported that Troy University Chancellor Jack Hawkins sent a mass email to faculty and staff on Tuesday containing a link to a YouTube video in which Harvard Business School's Prof. Clay Christensen disparaged atheists and non-religious people as a menace to American society.

"As we approach a New Year I am reminded of the blessings we enjoy within a democracy which is the envy of the world," Hawkins wrote in his email.

"For your pleasure -- and as a reminder -- I am sharing with you a 90 second video which speaks to America’s greatness and its vulnerability," he said, enclosing a link to the video embedded below.

In the clip, Christensen -- a well-known management guru and author of the book The Innovator's Dilemma -- spoke about an encounter with "a Marxist economist from China."

The economist purportedly told Christensen that the biggest surprise he received in the U.S. was to learn how critically "important religion is to the functioning of democracy."

The visiting economist, said Christensen, contended that the reasons American follow the law is because "most Americans attended a church or synagogue every week and they were taught there by people who they respected."

Christensen went on to say that he is beset by a "vague nagging feeling that as religion loses its influence in the lives of Americans, what will happen to our democracy? Where are the institutions that are going to teach the next generation of Americans that they, too, need to voluntarily choose to obey the laws?"

"Because if you take away religion," Christensen said, "you can't hire enough police."

American Atheists president David Silverman addressed a letter to Hawkins on the topic of the video. Silverman demanded an apology from Hawkins for disseminating the video and sending a message of intolerance to students of Troy University -- a publicly funded state college -- who follow non-Judeo-Christian or atheist beliefs.

Silverman informed Hawkins that he was contacting the university on behalf of an atheist student who was offended and alarmed to receive the video message.

"Atheists are not a trivial minority," wrote Silverman. "In Alabama alone, we represent 11 percent of the population, and statistically even higher numbers in universities and among college-aged residents; as many as 32 percent of people under age 30 are not religious."

Silverman said, "On behalf of the student who contacted us, the Alabama members of American Atheists, the thousands of atheists at Troy University, and the hundreds of millions of atheists worldwide who live productive, law-abiding lives without religion, we demand an apology from you for using the public university email system and your publicly funded position to disparage atheists and minority religious groups as well as perpetuating the discrimination and anti-patriotic sentiment against atheists in the United States."

Silverman ended by saying, "We ask for a public apology to the student, and other atheists whom you have disparaged with the video you included in your email."