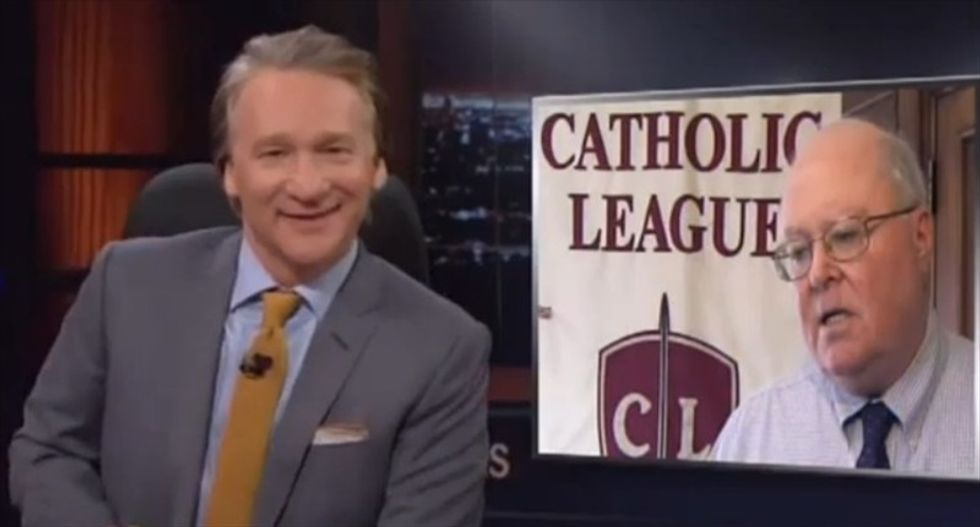 Real Time host Bill Maher blasted everyone from Catholic League head Bill Donohue to critics of his statements regarding Islam in a far-ranging "New Rules" segment on Friday.

"Liberals hate bullying, alright. But they're not opposed to using it," he said. "When they casually throw out words like 'bigot' and 'racist,' it does cow people into avoiding this debate. And if you're doing that, you don't get to wear the #JeSuisCharlie button. The button you should wear says #JeSuisPartOfTheProblem."

While anyone can come up with a reason why something that bothers them should be exempt from freedom of expression, Maher argued, opinions should not be illegal -- not even those belonging to someone like Rush Limbaugh. So anyone trying to campaign for Limbaugh cannot call themself a "proper liberal."

"You don't get free speech," Maher said. "You're just a baby who can't stand to live in a world where you hear things that upset you."

After grousing about Pope Francis, Maher then ripped Donohue, who he called the Pope's "American vigilante." Donohue, Maher said, has called him an "anti-Catholic bigot" so many times he made it his ring tone, while acting offended that Maher was against pedophilia.

As a comedian, Maher said, he likes that "jokes can hurt," mentioning North Korean leader Kim Jong-Un as an example. For him to be hurt by his depiction in the film The Interview, he argued, was "winning" for any satirist.

"Kim Jong-Un hates jokes, he doesn't get them, and he takes them too seriously," he said. "Which proves something I've always suspected about him -- he's a lesbian."