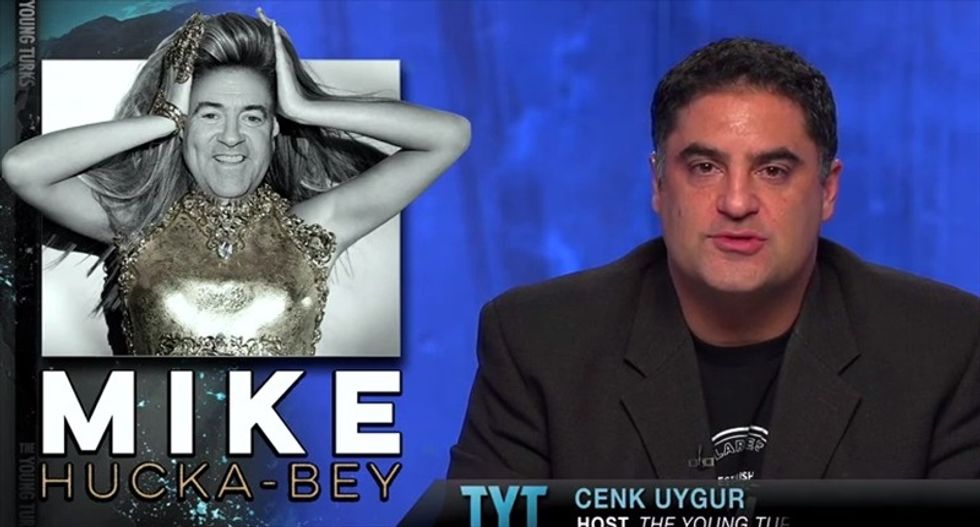 "Mike Huckabee, isn't that toxic? What have you done to the children of America?" Uygur exclaimed in faux-horror. "The hypocrisy of these guys knows no bounds."

While Huckabee has suggested Beyonce is "arguably" being pimped by her husband and questioned President Barack Obama and Michelle Obama for letting their children listen to her work, Uygur argued, he seemed to have no problem with Ted Nugent's lyrical content, going so far as to jam with him on his Fox News talk show in 2011.

Uygur then showed footage of the prospective GOP presidential contender smilingly playing bass guitar while Nugent -- introduced as "a patriot and a friend" on that episode -- sang "Cat Scratch Fever," which features sexually suggestive lyrics.

"I don't think Beyonce's talking about 'stroking the pussy' at 10 years old. Is that family values, Mike Huckabee?" Uygur said. "Oh, I see -- he's a white rocker. I got that all mixed up. When white rockers talk about 'pussy,' it's totally fine."

Uygur also revisited his argument that the conservative rocker faked "crapping himself" in order to avoid serving in the Vietnam War.

"Where the f*ck were you, Nugent, when there was an actual war?" Uygur asked sarcastically. "'Oh, I sh*t myself.'"

According to the Reno Gazette-Journal, it is unclear whether Nugent actually evaded service. Even though he came up with the defecation story in a 1977 interview with High Times magazine, he denied it in an interview 29 years later with the British newspaper the Independent, saying he actually had a student deferment to attend Oakland Community College.

Records show that Nugent later received a 4-F classification after failing a medical examination, making him unfit for military service.

Watch Uygur's commentary, as posted online on Thursday, below.